This is the James Scott Memorial Fountain on Belle Isle with the skyline of Detroit in the background on Jan. 21, 2016. The fountain is one of the most visited sites on the 985-acre island park, according to a new survey. Daniel Mears, Detroit News
Fullscreen

The Belle Isle Aquarium, one of the most visited sites on the island, reopened in 2012 and is operated by the Belle Isle Conservancy. Daniel Mears, Detroit News
Fullscreen

A detail from the James Scott Memorial Fountain on Belle Isle is shown. Daniel Mears, The Detroit News
Fullscreen

This is the James Scott Memorial Fountain with the skyline of Detroit in the background. Daniel Mears, Detroit News
Fullscreen

This is a detail from the James Scott Memorial Fountain. Daniel Mears, The Detroit News
Fullscreen

This is the first green of the Belle Isle golf Course that opened in 1922. Daniel Mears, Detroit News
Fullscreen

This is the James Scott Memorial Fountain with the skyline of Detroit in the background.(Photo: Daniel Mears, Detroit News)

The first public survey about Belle Isle since the state took control of the Detroit jewel two years ago found strong support for the state running the show.

A vast majority, about 84 percent, of the 717 people surveyed last year said they were “extremely to somewhat positive” that the island park is now managed by the State of Michigan Department of Natural Resources. About 6 percent of respondents didn’t like the DNR running things, and 10 percent were neutral about the idea.

The majority of people surveyed, 264, were Detroit residents. Overall there were not major differences in the way city residents viewed the park compared to respondents from Wayne, Oakland and Macomb counties, officials said. The $37,0000 survey was commissioned by the DNR.

Next month marks the two-year anniversary of the state’s management of the city-owned Belle Isle. The 30-year lease kicked in Feb. 10, 2014, under an agreement reached by Gov. Rick Snyder and Detroit’s former emergency manager, Kevyn Orr. It was a controversial move at the time, and tensions grew amid claims of overzealous traffic enforcement that riled some Detroit politicians and community groups. Traffic enforcement wasn’t addressed in the survey.

The state has cleaned up the park and made major improvements in the past two years.

Nearly 9 out of 10 visitors last year say they found Belle Isle to be a satisfying and welcoming experience. A large majority of visitors supported paying the State Park Passport — which is $11 for Michigan vehicles and $5 for Michigan motorcycles, and goes on license plates — to get into Belle Isle. Out-of-state residents must pay $31 for an annual pass or $9 for a day pass.

The cost of admission wasn’t a big reason for those who stayed away from the park. Only 16 percent of non-visitors said it was the main reason for not going to the 985-acre island park, which is situated on the Detroit River between the United States and Canada.

“More current visitors come to the island for what might be termed traditional park-like features — open spaces, fresh air, natural beauty,” according to the summary of the survey released Thursday.

Those who participated in the survey included 700 completed interviews and two focus groups. A total of 200 interviewed were associated with the Belle Isle Conservancy Group, a non-profit that advocates for the park; 400 surveys were from the general population of the Macomb, Oakland and Wayne Counties; and 100 in-person interviews conducted on the island. The interviews took place in August, September and November. 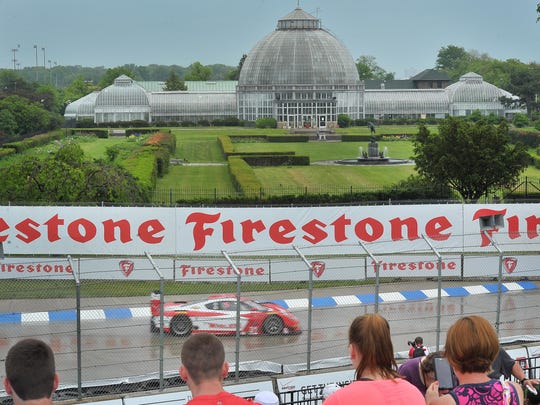 Fans watch a practice session during the Chevrolet Detroit Belle Isle Grand Prix on Belle Isle May 29, 2015. A large majority of those surveyed, 75 percent, liked the idea of large scale events, including the Grand Prix. (Photo: Detroit News file)

Among the other findings:

■A large majority, 75 percent, liked the idea of large-scale events, including the Grand Prix. Many also liked the idea of adding events such as concerts. But it is “additional boating activities” that would add the most value to the park, according to 74 percent of those surveyed.

■Most believe Belle Isle should be a place to have a picnic or barbecue but not a place to buy food. Few favored the idea of restaurants or anything beyond having buying basic beverages and food items.

■Many visitors spend more than three hours at the park and often come with at least one other person.

■Scott Fountain and Belle Isle Aquarium were by far the two most-visited sites.

In 2015, the first full year the state managed the park, there were 3.6 million visitors, according to DNR. During the peak months of June, July and August, Belle Isle saw 300,000 more visitors, 1.5 million, in 2015 compared to 2014, state data shows. The state doesn’t keep data on where park visitors reside.