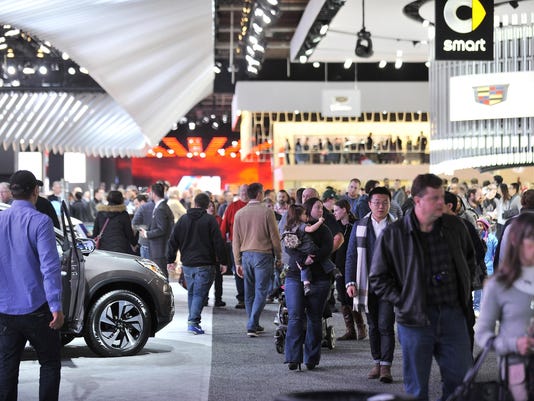 Through Thursday, there have been about 7,000 more visitors to the Detroit auto show this year than in 2015.(Photo: Robin Buckson / The Detroit News)Buy Photo

Attendance is up for this year’s North American International Auto Show and organizers expect a strong finish as the event wraps up this weekend.

Visitors of the show at Cobo Center reached 515,091 as of Thursday evening, up by 7,000 at the same point last year, said Max Muncey, spokesman for the show.

“We had a really big year on the reveals,” he said. “Beyond the vehicles, I think there was so much interest in the redone floor plans and the exhibits. People were blown away by the exhibit builds.”

“Our best friend is word of mouth,” he said. “It’s almost a totally new show. The exhibits look like you’re in Universal Studios. It’s remarkable.”

There should be plenty of parking, but attendees should be aware of the city’s new high-tech on-street parking system.

Muncey said he expects calm winter weather this weekend to encourage visitors to head downtown before the show’s end on Sunday. Overall attendance for 2015 was 808,775 visitors.

“People feel better about getting on the roads so we’re really anticipating a really strong finish,” he said.

Cost: Tickets are $13 for adults and $7 for those 7-12 years old and 65 and older. Children ages 6 and younger are free with a parent or guardian.