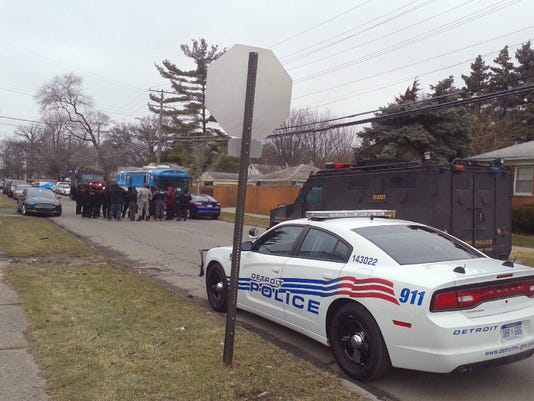 Police and a SWAT team were mobilized to the 6400 block of Artesian, in Detroit, where a barricaded gunman situation was declared on Thursday, January 28, 2016. A man in his mid-20s surrendered to police custody without incident.(Photo: The Detroit News / James D. Dickson)Buy Photo

Detroit — Police say an alleged love triangle led to an incident of domestic violence that drew a SWAT team to a home on Detroit’s west side on Thursday.

After a Detroit couple had an overnight guest, the woman in the couple allegedly saw her boyfriend and the other woman exiting a bathroom Thursday morning. She confronted the man, who is in his mid-20s.

At that point, the man allegedly turned violent, hitting the woman and biting her back, arms and legs, said Commander Elvin V. Barren of the Detroit Police Department.

The victim fled the home and, with the help of a neighbor, called police. She told police her boyfriend had an AK-47 in the house and there was a small child there too.

When police showed up to the home on the 6400 block of Artesian, south of West Warren Road, the man wouldn’t answer. At 11:26 a.m., a barricaded gunman situation was declared, Barren said.

A SWAT team was mobilized. A hostage negotiator reached the man via cell phone. He ultimately surrendered himself to police custody without incident. The barricade situation lasted less than two hours, Barren said.

The man is at the Detroit Detention Center on Mound, awaiting charges in the alleged assault. The gun is not alleged to have been used in the incident.

Police have the gun and are running ballistics tests on it, and as of 2 p.m. evidence technicians were still processing the scene at the house. The man should be able to get the gun back eventually, Barren said.

The victim “will recover from her injuries,” Barren said.