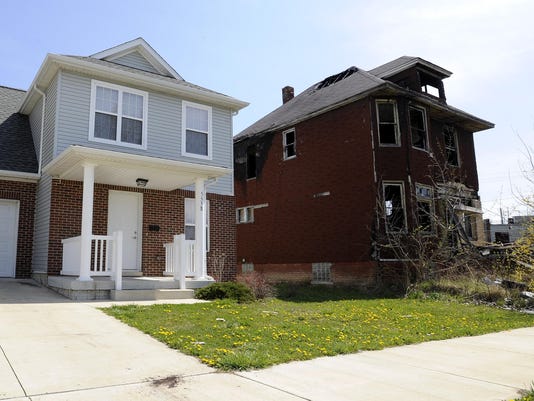 In Maxwell Place, some homes have been recently constructed, but burned houses remain.(Photo: Todd McInturf / The Detroit News)Buy Photo

Detroit — Charles Wheeler’s neighborhood near the shuttered Kettering High School is a study in juxtaposition.

The 64-year-old Detroiter lives in a tidy, newer single-family, lease-purchase home with an inviting front porch, part of a 30-unit low-income housing development known as Maxwell Place that launched in 2007.

Just down the street, however, are burned-out, decayed homes and vacant lots that represent some of the worst blight on the east side.

The new construction near Interstate 94 and Van Dyke remains vibrant and mainly occupied, which has pleased Wheeler.

“I used to ride past here when they were building all of these,” said Wheeler, who moved into the rental about three years ago. “It’s quiet over here. It’s been good.”

But whether the area has stabilized as a result of the new construction is still up for debate among neighbors and city officials. Detroit housing officials say they are rethinking whether it’s wise to build clusters of new homes in neighborhoods still pockmarked by decay and empty swaths of land.

Stephanie Phillips, a lifelong resident on nearby Seminole, said she’s puzzled by the Maxwell Place development, arguing efforts in her neighborhood should be directed instead toward downed trees, scrappers, squatters and blighted homes in need of demolition.

“When I saw the new houses I thought, ‘good, they are going to tear down some old ones.’ But, no,” said Phillips, 33, motioning to several abandoned houses and piles of dumped garbage next to a couple of newer rentals. “It’s ‘OK, let’s throw a few here and throw a few there.’ ”

The scattered-site affordable single-family housing model became popular in Detroit about 15 years ago as developers and community groups sought to stabilize city neighborhoods on the decline.

The low-income housing developments, funded with a mix of federal funds, state tax credits, private contributions and other sources, have taken shape in communities throughout Detroit and likely made sense to developers at the time.

But in the wake of the foreclosure crisis, officials say that housing model doesn’t necessarily fit the dramatically changed landscape of some city neighborhoods today. Infill housing isn’t the fastest or most cost-effective approach to stabilizing neighborhoods in comparison to home rehabilitation projects, city officials say.

Arthur Jemison, director of the city’s Housing and Revitalization Department, said the city is focusing now on other ways to strengthen Detroit neighborhoods — specifically by trying to preserve existing homes that are worth saving, and connecting them to walkable retail corridors.

Those corridors include Livernois and McNichols and the historic Jefferson-Chalmers district. Attention is also being directed toward reviving neighborhood retailers and other businesses on major arteries such as Grand River, Gratiot, Vernor, Jefferson and Warren.

“People everywhere are choosing walkable commercial districts to live around,” Jemison said. “We had them once, and we can have them again. It’s just got to be a focused effort.”

Last fall, officials introduced a map of the 10 priority areas for multifamily housing where the city hopes to focus development. They plan to update it annually.

The plan is geared toward transforming neighborhoods, preserving historic structures in areas such as Russell Woods and northeast Detroit’s Conant Gardens, and providing permanent supportive housing for the homeless.

The city last fall announced a $28 million project to convert the former Strathmore Hotel in Midtown into 129 apartments and 2,000 square feet of ground-floor commercial space. A portion of the units will be offered at affordable housing rates, the rest will rent at higher market rates.

Tim Thorland, executive director of Southwest Housing Solutions, a group that plans, develops and manages affordable housing and commercial property in southwest Detroit, said affordable housing projects like the scattered site developments have been popular in Detroit over the past 20 years as a way to jump-start occupancy and density in the neighborhoods. But the anticipated momentum around that didn’t always pan out, he said.

Thorland added there are “plenty of units around town that are functioning well, but the preponderance of units are not.”

“Whether it was multifamily or single-family, there was nothing nefarious about it,” he said. “It was that there really wasn’t any overall strategy for affordable housing development placement.”

Southwest has about 100 of the single-family, scattered site units in its affordable housing portfolio. They have been among the highest performing, he added.

“They’re good, and we’d do more of them,” he said of the units. “There’s just a subset of them that are a real problem.”

The project went in to meet the “significant need for high-quality affordable housing,” said Ken Outcalt, executive vice president of NRP Group LLC, the firm that served as a co-developer and general contractor for Maxwell Place. 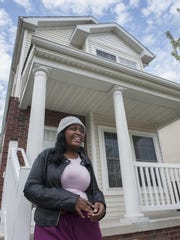 Erica Carter, 21, stands outside the house she shares with her family on Lantz. (Photo: John T. Greilick / The Detroit News)

In northwest Detroit’s Brightmoor, a nonprofit has headed a similar housing project that’s since run into trouble when funding dried up.

The 350 units — 50 built annually over six years — are spread throughout the four-square-mile community. All have tenants and remain in good shape, despite the blighted condition of much of the neighborhood, he said.

Unfortunately, the recession hampered plans, funding dried up and they weren’t able to continue. The nonprofit owns the property and employs a management firm to handle the rentals. The project is funded with tax credits, an investment by the city and the help of several banks.

“It’s a really difficult time in Detroit with all of the vacancies and all of the land that is sitting vacant without a real clear sense of how to productively use that land,” O’Brien said.

The Brightmoor project met its goal of adding the new homes and changing the neighborhood, Jemison said.

“But the problem is the rest of the neighborhood changed so much that it wasn’t able to stabilize it,” he added.

Meanwhile, near Seven Mile and Woodward, a $20 million project added 72 units of single-family housing and duplexes, a community art and farm house, and jump started a revival for the neighborhood, co-developer Cynthia Solaka said.

The two-phase Penrose Village development was aimed at bringing new opportunities to the diminishing housing stock in the area near the old state fairgrounds.

Solaka said she and her partners put the first 36 units in service by December 2006. The second round was completed in the fall of 2013, and interest in the units has been high, she said.

“Our plans are on hold for this point in time for that neighborhood,” she said. “There’s a tremendous need. We think it’s a good project.”

The group had hoped to add a third phase about a year ago, but failed to get a letter of support from the city for an application for tax credit funding from the state.

Jemison said the area encompassing the Penrose project is one of the city’s target areas for housing. The city, he said, is in talks with groups in the area over an alternative housing plan.

Erica Carter’s family of six moved into one of the newer, four-bedroom rentals on Lantz last March.

The 21-year-old dental assistant said it’s been peaceful and that the row of houses on her block haven’t been a target for crime.