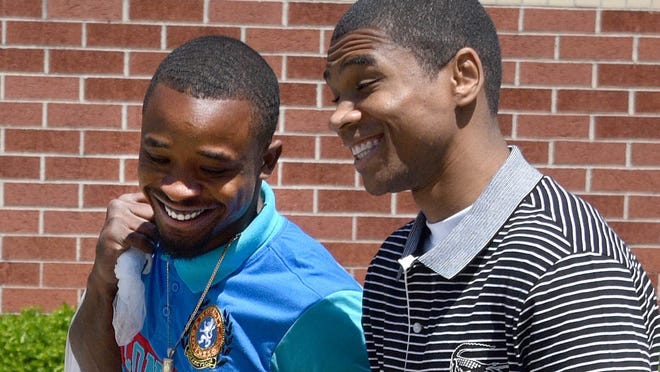 With a crooked smile and his hands folded in front of him, Davontae Sanford walked out of an Ionia prison a free man Wednesday for the first time in eight years.

Just hours later, he arrived home in Detroit to find his siblings crying with joy and got a hug from his mother.

“It feels wonderful, you know,” he said. “I want to try to put this behind me and move on with my life. And move forward with my family, you know. Take one day at a time, one step at a time and just go from there.”

His mother, Taminko Sanford-Tilmon, said she was relieved when her son arrived home.

“I never thought this day was coming,” she said Wednesday evening. “It doesn’t feel real. Maybe when I go to sleep and wake up tomorrow and cook him breakfast it will.”

When he left the Bellamy Creek Correctional Facility at 3:03 p.m., he was accompanied by his brother, DeShon, 22, who carried a large, stuffed white bag over his shoulder, and family lawyer Valerie Newman and Heidi Naasko, an attorney for Dykema Gossett, which represents Sanford.

Sanford, wearing a striped, short-sleeved shirt and black pants, declined to talk to the media assembled outside the prison in Ionia, as did those with him.

The four walked across a parking lot to a blue Ford Fusion. Davontae Sanford climbed into the rear right passenger seat. As the car pulled away, he appeared to be talking on a cellphone.

Sanford, 23, left the prison a day after a judge vacated his sentence for the 2007 quadruple killings in a drug house on Detroit’s east side. He was sentenced to 37-90 years for the killings authorities now admit he did not commit.

After Sanford was freed, his mother, Taminko Sanford-Tilmon, told The Detroit News: “I just want to spend the night with my baby. Close the doors and spend it together with family.”

The case became a national cause for innocence advocates, who pointed out that two weeks after Sanford was sent to prison, hit man Vincent Smothers confessed to the killings, providing details that included where one of the murder weapons was stashed. Smothers, who gave police accurate details about the crime, including where one of the murder weapons was hidden, repeatedly insisted Sanford wasn’t involved in the crime.

The decision by Wayne Circuit Judge Brian Sullivan came three weeks after Michigan State Police turned over the results of an 11-month investigation of the case, which, sources told The Detroit News, found Smothers and his alleged partner in crime Ernest Davis — not Sanford — were responsible for the four deaths.

Smothers has repeatedly stressed Sanford had nothing to do with the killings, which were the result of a fight between drug dealers, according to court documents and Smothers’ confession. But until Tuesday, prosecutors had steadfastly insisted they’d convicted the right person for the killings on Runyon on Detroit’s east side, and they rejected any notion Sanford was innocent.

Earlier Wednesday, Sanford’s mother told The News she was excited, but concerned, too, about his return.

“I’m excited, and I’m nervous for the society he’s coming home to,” she said.

At a news conference Tuesday, Newman said it had been a long road to freedom for Sanford.

“He’s suffered so much. He went into jail when he was 14; prison when he was 15 years old. He grew up in prison. So to think that now he’s coming out as a 23-year-old man, it’s very overwhelming in a lot of ways.

“We’re filled with happiness ... yet there’s the trepidation of reintegrating someone into society after that period of time growing up in prison.”

Despite the decisions Tuesday by the judge and prosecutor, a snag potentially could have left Sanford behind bars until Monday. He assaulted prison guards April 25, 2009, while incarcerated in the Thumb Correctional Facility in Lapeer County when authorities say they stopped his suicide attempt.

“It’s kind of heart-wrenching,” Lapeer County Assistant Prosecutor John Miller said Wednesday. “He was trying to commit suicide, and the guards were trying to remove him from his cell. (Sanford) told them he was going to make a noose and hang himself.

“While they were trying to remove him from the cell, he spit on one guard and kicked another.”

Sanford was charged with three counts of assaulting a prison employee, a five-year felony, but in 2011 pleaded guilty to two counts of misdemeanor assault, which carried a one-year jail sentence, or a $2,500 fine.

“The way the rules work, whenever someone is convicted of a crime while in prison, they have to serve their time consecutively, after their sentence is up,” Miller said.

Sanford would have had to wait until a Monday hearing before a 40th District Court judge, at which time Miller said his office would not press for the sentence to be upheld.

“We don’t want to stand in the way of this kid getting justice,” he said.

But the issue became moot when someone paid the fine Wednesday, Newman said.

“It’s ridiculous; they didn’t want to take the necessary action to free an innocent man immediately,” she said. “He would’ve had to stay in jail another five extra days. But we found someone to pay the fine.”

After Sanford’s 2007 arrest, he gave police statements that didn’t match with the evidence at the crime scene. For instance, he said he had used a mini-14 rifle to commit the murders, but no shell casings from that type gun were found. He later pleaded guilty to second-degree murder.

His attorneys said he was tricked into confessing and pleading guilty because he was trying to appease police and his attorney, Robert Slameka, whose work on the case has been strongly criticized. For instance, Slameka never filed a motion to have his client’s confession thrown out, despite there being red flags, Newman said.

“One of the really tremendous failures of the system was his defense attorney. There was not one pretrial motion that was brought,” Newman said at a news conference Tuesday. “Davontae’s confession had all the hallmarks of a false confession; (it was) never challenged.”