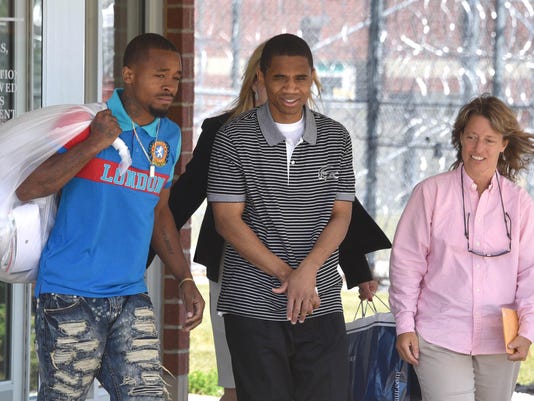 Devontae Sanford, center, was released from prison on June 8 after spending nearly 8 years in prison for homicides he did not commit.(Photo: Dale G. Young / The Detroit News)Buy Photo

Wayne County prosecutors waited months before telling Davontae Sanford’s attorneys about evidence that would exonerate the man who spent eight years in prison for murders he didn’t commit, according to a Michigan State Police report.

Legal experts question the delay that forced Sanford to sit in prison an extra eight months before prosecutors decided to drop the charges. He was released June 8.

The state police report, released Friday, shows prosecutors were told of the alleged perjury in October 2015, but waited until May to inform Sanford’s defense and drop the case against him.

Tolbert, who became Flint’s police chief after leaving Detroit, testified in a July 2010 court hearing the 14-year-old Sanford had drawn a sketch of a Sept. 17, 2007, quadruple homicide scene. In October 2015 Tolbert contradicted his earlier testimony when he told state investigators he had sketched the diagram. State police are seeking perjury charges against Tolbert. Prosecutor Kym Worthy said the crime scene sketch had been “a major building block” in the case against Sanford, who was convicted in 2008 of second-degree murder. She told reporters at a June 9 press conference she had learned only three weeks earlier of Tolbert’s alleged perjury, when state police turned over their investigative report.

“We received information on the 20th of May of this year that called into question the murder conviction of Davontae Sanford,” Worthy said at her press briefing, a day after Sanford was released from prison. “The new information from the Michigan State Police led us to the conclusion that the interest of justice required that Mr. Sanford’s conviction be set aside.”

But the state police report, released to Michigan Public Radio through the Freedom of Information Act, shows prosecutors were informed of the alleged perjury Oct. 6, 2015, when state police detectives met with assistant prosecutors Rob Moran, Jason Williams and Tom Chambers and investigator Cory Williams “to discuss our interview results with Chief Tolbert,” the report said.

“They were specifically briefed on Chief Tolbert’s statements regarding the diagram that Sanford had allegedly drawn for DPD,” the report said.

When asked whether waiting eight months to disclose Tolbert’s alleged perjury to Sanford’s attorneys was an ethical violation, Assistant Prosecutor Maria Miller said in an email: “We received the completed investigation from MSP in May and immediately disclosed information to Sanford’s attorneys.”

Michigan’s code of conduct for prosecutors is contained in a Michigan Supreme Court document which makes clear that prosecutors have a higher calling than simply winning their cases. Rule 3.8(d) of the Michigan Rules of Professional Conduct specifically states prosecutors have an obligation to make a timely disclosure to the defense of evidence that could exonerate a suspect.

Experts consulted disagreed over whether that rule applied in this instance because the case had already been adjudicated and was being appealed. But they agreed that the prosecutor’s standing as a minister of justice would have required the timely disclosure of Tolbert’s alleged perjury to Sanford’s defense.

Davontae Sanford: Life on the Outside

“I don’t think there’s any question the rules of ethics say (prosecutors) should turn that information to the defense in a timely manner,” said Curt Benson, professor at the Western Michigan University Cooley School of Law. He added prosecutors needn’t wait for the conclusion of an investigation to disclose to defense attorneys information that suggests a defendant may be innocent.

University of Detroit Mercy law professor Larry Dubin agreed. “A prosecutor as a minister of justice has an ethical obligation to turn over that information to the defense.”

Dubin said the state Attorney Grievance Commission could launch an investigation to determine if there were any ethical violations. “They could unilaterally decide they want to investigate; or, if someone files a complaint, they would be bound to investigate.”

Representatives for the Attorney Grievance Commission could not be reached Sunday for comment.

The question of whether prosecutors also had a duty to drop the case against Sanford immediately after they discovered Tolbert’s alleged perjury isn’t such a black-and-white issue as disclosure to the defense, both Dubin and Benson said.

“My opinion is that a prosecutor ethically has some responsibility to do something in a timely fashion,” Dubin said. “We can argue about what they should do, but as a minister of justice, if a prosecutor learns of something that calls a conviction into question, I think they have an ethical duty to engage in some remedial action.”

When asked whether prosecutors had a duty to drop the case against Sanford after they first found out about Tolbert’s alleged perjury, Miller said, “We always wait for the outside investigation to be completed before making a decision in a case.

“It is wisest to have the completed investigation. We would not have been able to speculate about what else it would have revealed.”

Wayne State University Law School ethics professor Peter J. Henning said he didn’t think the prosecutor committed any clear-cut ethics rules violations. But, he added: “Even without a violation of the ethics rules, to let a person who you know is innocent, or at least have substantial doubts about his guilt, to sit in prison is not proper.”

Henning said he doubted the state grievance commission would mete out punishment, but said there would be repercussions. “This case is a black eye on the Wayne County Prosecutor’s Office, and I suspect that will be the primary punishment it receives,” he said.