State police say their investigation is done; probe shows 3 other men should be charged for murders blamed on teen 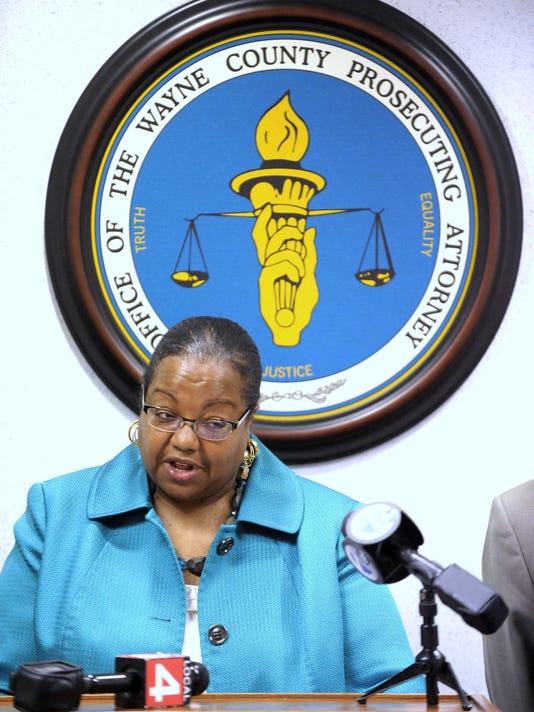 The status of new murder charges in the Davontae Sanford wrongful conviction case is in question as Wayne County prosecutors and Michigan State Police dispute the need for more investigation.

State police in May wrapped up an 11-month probe into the September 2007 quadruple homicide for which Sanford was convicted, and they submitted warrant requests for three men investigators say were responsible for the slayings on Runyon Street.

“The warrants submitted on the Runyon Street homicides will be returned to Michigan State Police for further investigation,” she told reporters at a June 9 press conference announcing she planned to drop the charges against Sanford, who spent eight years in prison for crimes he did not commit.

But state police spokesman Lt. Mike Shaw told The Detroit News he doesn’t think the requests for further investigation will be returned from prosecutors.

“We are done with our portion of the investigation,” he said. “I don’t want to say there’s not some small chance (the request) could happen, but I don’t think it’s going to. As far as our detectives are concerned, that investigation is completed.”

Assistant Prosecutor Maria Miller insisted Tuesday her office would be returning the murder warrants, but didn’t say when that would happen.

After completing their investigation, the state police submitted warrant requests for the men they said were responsible for the killings: Hit man Vincent Smothers and two of his alleged accomplices.

The uncertainty over additional investigation is one of several apparent contradictions in the case.

Who first asked for probe?

At her press conference, Worthy for the first time spoke at length about the Sanford case, laying out her reasoning for dropping the charges. Some statements she made don’t match police reports and court records.

Worthy said she took action to dismiss charges against Sanford when Wayne Circuit Judge Brian Sullivan vacated his sentence, after the completion of the state police investigation she said was launched last year at her request.

“On May 4 (2015), I requested MSP undertake an investigation into the Davontae Sanford case,” she told reporters. “We made that request. Nobody else. We did.”

For months, the prosecutor’s office said that it initiated the case review, but state police Detective Sgt. Christopher Corriveau wrote in his report released through a Freedom of Information Act request by Michigan Public Radio that he initially asked for the investigation.

“I determined that a more in depth investigation would be appropriate,” he wrote. “In late April of 2015 ... I met with representatives of the Wayne County Prosecutor’s Office and requested that the investigation ... be re-opened.”

“This is what caused Prosecutor Worthy to request that the investigation be re-opened,” Miller said. “This has nothing to do with Sgt. Corriveau.”

Worthy’s May 4 letter to Etue came after Corriveau said he requested the investigation.

The state probe found Smothers, his alleged partner, identified by Detroit News sources as Ernest Davis, and a third man who hasn’t been named were responsible for the four murders.

The investigation also found former Detroit Police Deputy Chief James Tolbert had allegedly lied when he testified during an appeal hearing Sanford drew a sketch of the Runyon crime scene. Tolbert later told state detectives he had drawn the diagram, which prompted the perjury charge request.

Prosecutors knew about Tolbert’s alleged perjury eight months before dropping charges against Sanford. Legal experts have suggested it was unethical for prosecutors not to quickly divulge the information to his lawyers. The delay left Sanford in prison for months after they learned of information that could have led to an earlier exoneration.

Miller said prosecutors also are considering the perjury warrant request. The statute of limitations expires July 13 and she said a decision will be made before that date.

Worthy said part of the case against Sanford was a police K-9 unit dog that she said led detectives to Sanford’s house on Beland, two blocks west of Runyon.

“The dog track picked up from the scene ... and tracked to Beland street, and lost the scent outside of 19700 Beland — Davontae Sanford’s home,” Worthy said.

However, according to the Recitation of Facts document filed by Worthy’s office in 2011: “The dog … tracked to 19770 Beland, meaning the dog lost the scent there.”

The May 20 state police report also says the dog stopped in front of 19770 Beland.

When reporters pointed out after Worthy’s prepared remarks that reports showed the dog had stopped in front of a house 344 feet north of Sanford’s residence — roughly the distance from home plate to left field at Comerica Park — she insisted: “It ended at his house.”

In her emailed reply Tuesday, Miller added: “The evidence shows the trail ended in close proximity to his house.”

After Smothers was arrested in April 2008, he confessed to 12 murders-for-hire, including the four on Runyon. Sanford’s attorneys for years have pointed to the hit man’s confession as evidence of Sanford’s innocence.

“(Smothers) ... made his first statement in 2008, a few weeks after Mr. Sanford pleaded guilty and was sentenced,” she said, reading prepared remarks. “The first statement was vague and devoid of any real facts.”

Smothers’ first statement to police, recorded on video, included several accurate details about the killings. Without prompting, the hit man told police the kind of weapons used in the crime, and told of a conversation he had with a woman who was shot five times before crawling into a back bedroom and hiding under a bed.

Still, Miller said: “The ‘facts’ (in Smothers’ confession) had significant issues. There are a number of discrepancies that are well noted in (trial judge Brian) Judge Sullivan’s opinion.”

Miller provided a copy of Sullivan’s Feb. 28, 2012, order denying Sanford’s motion to withdraw his guilty plea. In his order, the judge wrote: “Smothers’ confession does not provide clear and convincing evidence of (Sanford’s) innocence.”

The judge also questioned Smothers’ statement because he said there were inconsistencies in two versions of a conversation the hit man had with Valerie Glover, the woman who hid under the bed.

However, the judge acknowledged: “Some portions of (Smothers’) statement do reflect a detailed description of the scene of the crime and a plausible version of what happened.”

Sullivan further conceded there was an “unexplained match in ballistics” regarding the Springfield .45 caliber handgun Davis allegedly used in the crime. Smothers told police exactly where the gun had been stashed in a house on Promenade. Ballistics tests proved it had been used in the Runyon killings.

Worthy used information from the same April 20, 2008, statement to charge the hit man with the eight other killings he said he’d committed. After cutting a deal with prosecutors, Smothers pleaded guilty to second-degree murder and was sentenced to 50-100 years.

Smothers claimed prosecutors offered the plea deal in exchange for his silence about the Runyon killings. Worthy denied her office made the offer. When asked why she chose to plead down a case in which the defendant had confessed, she declined to comment.