Dog owner Geneke Lyons, left, talks directly with Lucillie Strickland, far right, before he is sentenced in his dogs' killing of her 4-year-old son, Xavier Strickland on Thursday, June 30, 2016, at the Frank Murphy Hall of Justice in Detroit. Daniel Mears, The Detroit News
Fullscreen 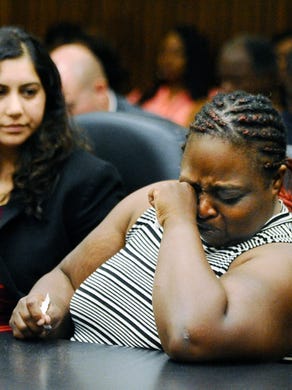 Lucillie Strickland wipes her eyes as she listens to Geneke Lyons' comments before his sentencing. Assistant Wayne County Prosecutor Parisa Kiani is at left. Daniel Mears, The Detroit News
Fullscreen

Geneke Lyons was given five years probation with nearly a year of jail time with work release for the incident. Daniel Mears, The Detroit News
Fullscreen

“I’m willing to forgive you for what your dogs did,” Lucillie Strickland told Lyons. Daniel Mears, The Detroit News
Fullscreen

Wayne County Circuit Judge James Callahan admitted that he went below the sentencing guidelines because he believed Geneke Lyons was truly remorseful for the incident and also that he had turned his life around from a previous prison term for dealing drugs. Daniel Mears, The Detroit News
Fullscreen

Detroit — A Detroit man whose four pit bulls mauled a 4-year-old boy last year was given nearly a year of jail time with five years probation Thursday for the incident.

Wayne County Circuit Judge James Callahan admitted he went below the sentencing guidelines because he believed Geneke Lyons was truly remorseful for the incident and he also had turned his life around from a previous prison term for dealing drugs.

Lyons is credited with 43 days served. He also will be on work release while in jail.

The hearing was an emotional proceeding as Xavier Strickland’s mother and Lyons faced one another as Lyons spoke to her about her loss.

“I’m willing to forgive you for what your dogs did,” Lucillie Strickland told Lyons.

Earlier during the sentencing hearing, Lyons apologized to Lucillie Strickland, saying he has a 2-year-old son and “ could not imagine the pain” she’s feeling.

Strickland said in her victim impact statement the pain of losing her young child persists.

“I wake up in the morning and I kiss his picture,” she said. “That is a part of me I can’t get back.”

Lyons faced up to 15 years in prison. He was convicted June 9 by a Wayne County jury on manslaughter and possessing dangerous animals causing death charges.

Callahan dropped a second-degree murder charge, saying the prosecution had not proven its case before jurors began deliberations.

Dog owner Geneke Lyons of Detroit was sentenced in the mauling death of 4-year-old Xavier Strickland.

Xavier Strickland was pulled from his mother Dec. 2 as they walked in the area of Baylis and the Lodge Freeway service drive on the city’s west side. They were on their way to Thurgood Marshall Elementary School.

The 28-pound boy was grabbed from his mother’s clutches by three of the dogs and pulled under a gate to the backyard of the home where the dogs were kept outside.

“The dogs grabbed his leg and started yanking him ... pulling him,” Strickland said during Lyons’ trial. “I was trying to pull back. I tried to have a tight grip. I just couldn’t. I could just grab a shoe. When they got to the gate, I was still trying to grab him.”

A fourth dog, the father of the pack, joined in the attack once the dogs pulled the youngster into the backyard.

Strickland said she ran around the corner for help as the dogs mauled her son.

A civil lawsuit is pending in the case.