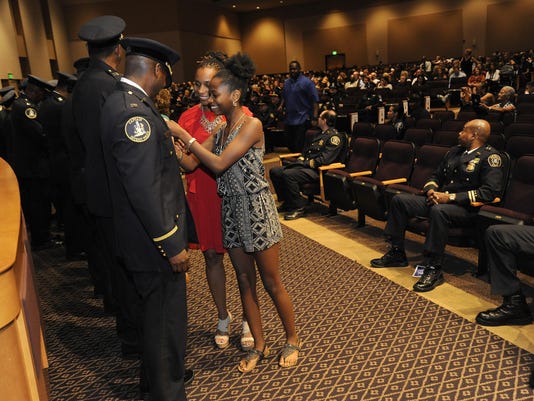 Detroit — Eighty members of the Detroit Police Department were promoted Friday at an event held at Second Ebenezer Church on the city’s east side.

The event, which was attended by more than 300 family, friends and fellow officers, was mostly filled with celebration, but also had serious moments as recent acts of violence against police were discussed. A moment of silence was also held for the police officer recently shot and killed in San Diego.

Willie Bell, chairman of the Detroit Board of Police Commissioners, acknowledged things are challenging for police officers right now, but also said that every day is a new opportunity. He also encouraged officers to respond to situations on their job, like they would want a fellow police officer to respond to a police call involving one of their family members.

Chief James Craig echoed Bell, and said as new leaders in the department, the promoted members would have to make unpopular decisions and have uncomfortable conversations.

“As leaders, you no longer get to look the other way,” Craig said. “You can’t wink or wave. We have video cameras now. We see everything.”

Craig said the department is “the paradigm for law enforcement elite,” in the country.

He also said the department has grown under his stead, adding new positions and administering the test to become lieutenants and sergeants for the first time in eight years.

“All the hours that he works, 24 to 36 hour shifts, I’m extremely proud of him because he does a dangerous job,” Robinson said of her husband. “He puts his life on the line for us and everyone in the city and for that I am truly grateful.”