Viking ship docks along Detroit River on way to NYC 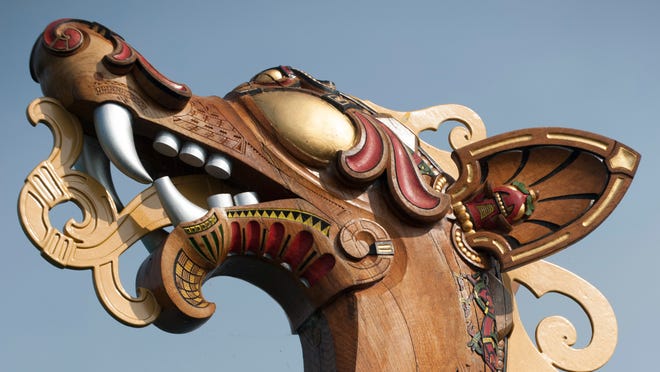 Detroit — Growing up, Jemina Soutter was always on boats in her native England and later was inspired by her mother, a sailor, to explore adventures at sea.

Soutter is now part of a 33-member crew aboard the Draken Harald Hårfagre, dubbed the world’s largest replica Viking vessel, that launched in Norway in April, sailed across the Atlantic and stopped in scores of ports along its voyage.

“This is the best job in the world,” said Soutter, who is studying navigation and martime science at Plymouth University in England, so she can eventually captain a ship. “I really really want to sail. It’s about the freedom, the places you get to go and the people you meet.”

The Draken’s vogage was aimed at retracing the Vikings’ exploration of the world a thousand years ago. Beginning in Norway, the Draken traveled to Scotland, the Faroe Islands in Denmark, Iceland, Greenland, Canada and the U.S. In recent weeks, it has been in the ports of St. Ignace, Bay City and Port Huron. It will eventually head to New York, then dock for the winter in Connecticut at Mystic Seaport, the largest maritime museum in the United States.

One of the features of the Draken are replicas of the mythological Odin’s Ravens. Known as Huginn and Muninn, representing thought and memory, the ravens fly the world in Norse mythology and bring back wisdom to the god Odin.

Wyandotte resident D. J. Holzhueder, a self-described mythology nerd, was surprised but thrilled to see the ravens on the Draken.

“They were messegners to Odin, telling him what was going on in the world,” said Holzhueder, who was wearing a t-shirt with Huginn and Muninn on it. “Vikings thought in battle if they saw ravens over a battlefield it was a good omen. They thought Odin was watching over them.”

Besides exploration, embracing the spirit of the Vikings and seeking adventures, the Draken voyage was also aimed at encouraging people to take on new challenges, said David Short, one of the crew members.

He landed on the ship four years ago after going to the Viking Ship Museum in Norway, then reading about Norwegian adventurer Thor Heyerdahl.

Most people who go the museum think it would be cool to be part of an adventure like the one Short’s been having on the The Draken. It was enthusiam and luck that lead him on his path.

“I’ve been very lucky,” Short said. “But I’ve also stuck to trying to do what I want.”