Detroit Police Chief James Craig, speaks at a memorial for Sgt. Kenneth Steil, who died a week after he was shot by a suspect he was chasing. 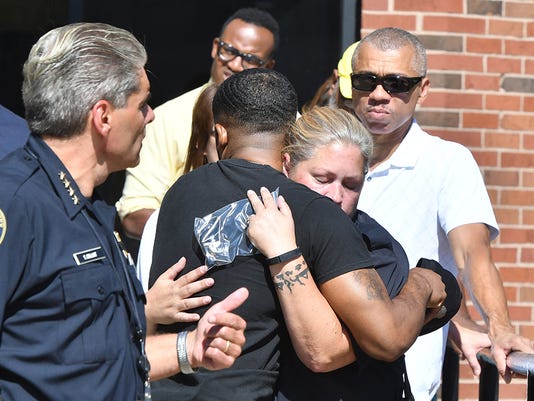 Detroit Police Officer Sergeant H. Cameron hugs Officer Kijuan Anderson before the start of a press conference and memorial for Sgt. Kenneth Steil, who died a week after being shot by a suspect he was chasing, in front of 9th Precinct in Detroit, Michigan on September 19, 2016.(Photo: Daniel Mears, Detroit News)

After he gathered himself, Dolunt explained he wanted people to know how dedicated Sgt. Kenneth Steil was by going to work every day, patrolling the city’s most dangerous area, the 9th Precinct.

Dozens of officers and citizens Monday assembled outside the east side precinct on Gratiot to pay tribute to the 20-year department veteran, a married father of two who died Saturday from a shotgun wound he sustained last week while chasing a shooting and carjacking suspect.

Steil’s squad car, No. 143811, was parked in front of the precinct flagpole, which displayed the banner at half-staff. The black Dodge Charger was draped with a black shroud and a blue ribbon.

Throughout the afternoon, as passing motorists beeped their horns, officers placed stuffed and plastic sharks on the hood, a nod to Steil’s department code name, “Shark.”

“We’ve gone into the darkest alleys together,” said Officer Kijuan Anderson, a member of Steil’s unit. “He taught me everything I know. He’d say, ‘Don’t let this job get to your head. I want you to be a loving person to your family.’

“I would do anything to have another moment with him.”

Steil is the second officer during Craig’s tenure to be killed in the line of duty in a gun-related incident.

Officer Patrick Hill died Oct. 19, 2013, after being in a coma for six months. He was struck in the head April 2, 2013, as police exchanged gunfire with 23-year-old Matthew Joseph, who was killed in the gunfight.

Before Hill’s death, the most recent Detroit cop fatally shot in the line of duty was Officer Brian Huff. He was killed May 3, 2010, as a member of a crew investigating a report of shots fired in an abandoned duplex on the city’s east side. When he walked into the duplex on Schoenherr near 8 Mile, he was shot twice in the head.

Steil is the 40th police officer nationwide to be fatally shot this year, according to the Officer Down Memorial page. That’s up 50 percent from last year.

Before the precinct ceremony, criminal charges were upgraded for Marquise Cromer, 21, in connection with Steil’s shooting.

Steil was part of a team that tried to arrest Cromer for allegedly shooting his father in the foot Sept. 11.

Cromer had fled from his family’s home around 5 p.m. Sept. 11 in the 2100 block of Dickerson on the city’s east side before police arrested him in the15000 block of East Seven Mile.

Cromer is expected to be arraigned on the new charges at a probable cause conference scheduled for 8:30 a.m. Tuesday before 36th District Court Judge Deborah Langston.

Cromer also has been charged in connection with an assault and carjacking that also occurred Sept. 11 at a car wash on Conant and Casmere in Hamtramck.

Dad of accused cop killer: ‘He had anger issues’

He’s had previous run-ins with police.

His family says he served almost three years in prison for burning down the home of his father’s girlfriend on Lappin in October 2010.

In November 2013 and January 2014 he was charged with resisting and obstructing a police officer and both times sentenced under the Holmes Youthful Trainee Act, which allows defendants ages 17-20 to avoid a criminal record, according to police and court records.

Anderson said Steil and his crew regularly confronted dangerous suspects. “If Shark had paperwork to do, he’d be back out in the street in 20 minutes. He never left us hanging.”

Anderson called Steil, “my hero ... my mentor. My life will never be the same.”

■Visitation for Detroit Police Sgt. Kenneth Steil will be from 4-9 p.m. Wednesday and 2-9 p.m. Thursday at Wujek-Calcaterra and Sons 36900 Schoenherr, Sterling Heights.

Detroit police have set up a donation page.