Jose Morales, 11, of Detroit pops a wheelie on his bicycle as he rides westbound on Vernor Avenue near Cavalry during Open Streets Detroit. Jose Juarez, Jose Juarez
Fullscreen

Sunpreet Singh spins Cds as he DJs on Michigan Avenue near the Lodge freeway, as part of the festivities during Open Streets Detroit. Jose Juarez, Jose Juarez
Fullscreen 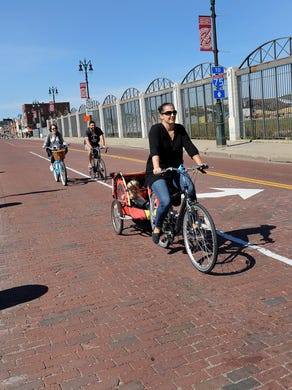 People bike westbound on Vernor Avenue near Cavalry street, as they enjoy the weather and the atmosphere of Open Streets Detroit. Jose Juarez, Jose Juarez
Fullscreen

Barber Tony Barrientos, right, gives a haircut to Pedro Blanco, 7, at the corner of Vernor and Junction during Open Streets Detroit. Barrientos works at Southwest Styles, which is located at this corner next to Duly's Coney Island. Jose Juarez, Jose Juarez
Fullscreen

People bike westbound on Vernor Avenue near Cavalry street, as they enjoy the weather and the atmosphere of Open Streets Detroit on Sunday.(Photo: Jose Juarez / Special to The Detroit News)Buy Photo

A city as auto-loving and auto-reliant as any in America put itself in park Sunday, closing down stretches of a few major streets as part of an experiment to allow pedestrians the freedom of a carless environment.

It’s early yet, but Open Streets Detroit — which closed off portions of Michigan Avenue and Vernor Highway to traffic from noon to 5 p.m. Sunday — was overwhelmingly viewed as positive in the judgment by those who walked, biked and hula-hooped on streets normally dominated by automobiles.

Sunday was the first half of a two-day open streets experiment — the next one is next Sunday, on the same streets, also from noon to 5 p.m.

“They should do this all the time; it’ll get people back in the city, get them outside,” said Barbara Carlson, 48.

Visiting from Fort Worth, Texas, Carlson and her husband, Victor Cavazos, 46, have been in Detroit since Friday.

They came to see Comerica Park — the 22nd of 30 Major League Baseball park they have visited. Having crossed a Tigers game off their baseball bucket list, they were on the way to Slows Bar BQ, except they kept being hit with detours whenever they tried to drive onto Michigan Avenue.

It wasn’t until they stopped at an information booth, located in front of what used to be Tiger Stadium, that they learned why the street was so walkable.

When the couple told friends they were visiting Detroit, the cringes and the skepticism were pretty much universal. But so far they love it. They love the People Mover — “it takes up almost no space!” said Cavazos — the Tigers, the people, and the willingness of the city to experiment.

“It’s very diverse here,” Carlson said. “But it’s like everybody’s good with it.”

Jeneka Olawale, 28, planned to drop off her daughter Roslyn, 1, to her mother at Roosevelt Park before heading to church Sunday. The detours were so severe she was forced to park east of the Lodge Service Drive, put Roslyn in a stroller, and walk.

“People are interacting who are usually inside their cars,” Olawale said.

Mounted officers from the Detroit Police Department were a crowd favorite, even if the horses did dirty the streets some. Cyclists rode without fear, without helmets, with the only vehicles in the area being ambulances that occasionally had to leave to transport patients. Families played adult-size versions of childhood favorites, including: four square, Jenga, checkers and Connect Four.

A board at Roosevelt Park asked visitors, “Where did you come from today?” Answers included far-away locales, such as New York City and Portland, Oregon, and suburbs such as Wyandotte and Sterling Heights. 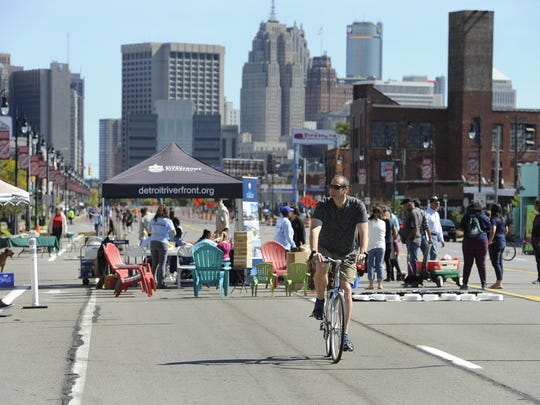 People bike and walk westbound on Michigan Avenue from Rosa Parks Boulevard as they enjoy the weather and the atmosphere of Open Streets Detroit on Sunday. The next one is next Sunday, also from noon to 5 p.m. on Michigan Avenue and Vernor Highway. (Photo: Jose Juarez / Special to The Detroit News)

A carless Michigan Avenue is far from unprecedented. Part of the road was blocked off on Labor Day for a parade.

Pat Osman, 48, manager of Nemo’s Bar & Grill on Michigan Avenue, said it was too early to tell what impact the open streets experiment had on the bar, which he said attracts a “cross-section” of Detroit, from sports fans to union members to attorneys to people stopping in for the first time.

“I think it will help the business,” Osman said. “Anything that’s good for Detroit is good for us. We have a lot of faces down here I don’t recognize.”

Nemo’s game-day shuttle to the Tigers game had to take a different route, Osman said, but he said the bar is used to making adjustments, citing construction up the road.

“Things change; we always have to adjust,” Osman said.

If all goes well during the two-week pilot, Open Streets Detroit affiliates previously told The News, it is possible the promenade experiment could expand to other streets and other parts of the city.