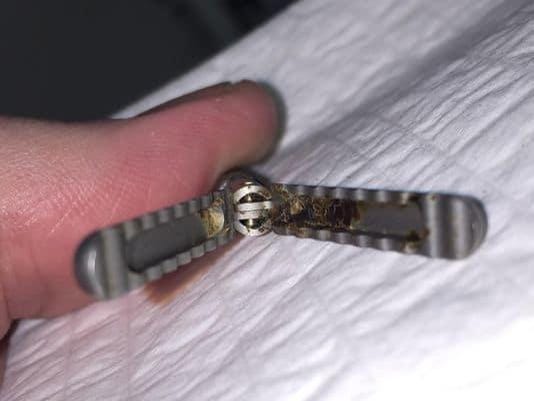 This filthy grasper interrupted an operation at Children’s Hospital of Michigan on Dec. 23, one day after state regulators concluded their probe of the DMC.(Photo: Courtesy of Amy Hicks)

The inspection was conducted by inspectors for the Michigan Department of Licensing and Regulatory Affairs and Joint Commission, a nonprofit accreditation agency, on behalf of the Centers for Medicare and Medicaid Services, a federal agency that oversees funding to hospitals.

The inspections of sterilization facilities at Children’s Hospital of Michigan, Harper University Hospital, Detroit Receiving Hospital and the Karmanos Cancer Center follow a Detroit News article this month that another operation was interrupted by an extremely soiled instrument on Dec. 23, just one day after state regulators ended their investigation of the system.

“The federal investigations into this matter are now ongoing,” Jason Moon, communications director of LARA, wrote in an email to The News, declining further comment.

Officials for both LARA and the Joint Commission were on the scene of the DMC on Monday morning.

“The surveyors are present and the DMC will work with them during the course of their survey,” the DMC wrote in a comment shortly after 11:30 a.m.

CMS officials would only confirm the inspection.

It wasn’t immediately clear what, if any, action could emerge from the inspection. Under federal rules, the CMS only can sever funding to hospitals — not fine them. The DMC receives more than $700 million in Medicare and Medicaid funding. Typically, the CMS gives hospitals it cites 90 days to to fix issues and then moves to sever funding if the problems remain following a re-inspection.

The surprise inspection comes after both state and federal officials closed their probes of the DMC late last year. Those investigations were prompted by a Detroit News investigation uncovering a decade of complaints about improperly cleaned tools at hospitals.

The News found that dozens of operations, from appendectomies to spinal fusions, were interrupted because of dirty instruments, while patients were needlessly kept under anesthesia. The News investigation focused on a sterilization department in the basement of Detroit Receiving that cleans thousands of surgical instruments per day and is plagued by dysfunction.

The latest action follows a whirlwind month for the DMC. Earlier this month, the hospitals’ corporate owner, Tenet Healthcare, announced that CEO Joe Mullany was no longer in charge of the eight-hospital system. He was replaced by Dr. Anthony J. Tedeschi. It wasn’t clear whether the dirty instrument scandal played a role in the move.

The day after the leadership change, The News reported that a gall bladder removal of an Armada teen was complicated when a surgeon spotted a filthy laparoscopic grasper that had been marked as sterile. The operation continued and the teen wasn’t harmed.

The DMC reported the incident to LARA 21 days after it happened. Hospital officials acknowledged they did so after the mother of the teen posted a public comment on a detroitnews.com story about the conclusion of the state’s investigation.

The DMC in January issued a statement saying “as part of our ongoing performance improvement efforts, we are reviewing the circumstances surrounding the event.”

Since then, more operations have been interrupted at Children’s Hospital because of dirty instruments, according to two DMC doctors who did not wish to be identified in fear of retribution.