Detroit and unions teaming up to expand jobs

Detroit and unions teaming up to expand jobs 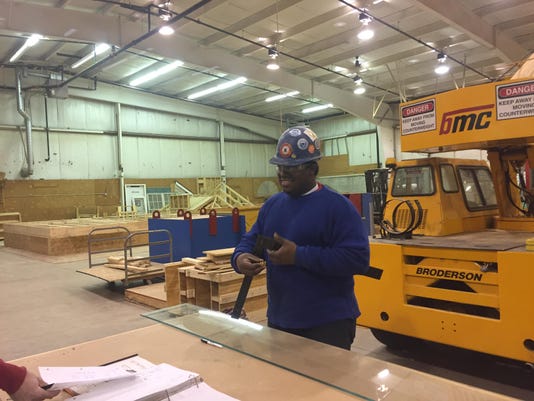 Richard Belue, 26, of Detroit, is enrolled in the Detroit Area Carpentry Apprentice Training School in Ferndale. He will complete the four-year course in June.(Photo: Christine Ferretti / The Detroit News)Buy Photo

Ferndale — The state’s largest skilled trades union on Wednesday announced a new agreement with Detroit designed to expand career opportunities in the field for city residents.

The Michigan Regional Council of Carpenters and Millwrights has pledged that 25 percent of all first-year apprentices in the training program will be Detroit residents.

“With the amount of work we see coming into Detroit, the numbers are doable,” Mike Jackson, executive secretary-treasurer of the carpenters union, said during a news conference inside the Detroit Area Carpentry Apprentice Training School in Ferndale.

“If you want to be a real carpenter today, you need real training. You need a four-year program if you are going to do the job,” he said. “It’s a perfect time to come back to the trade. We want to be a positive part of that turnaround.”

Under the agreement, the Michigan Regional Council of Carpenters Local 687, Local 1234 and Local 1045 will triple the number of Detroit residents trained to be carpenters over the next decade. Together the three unions currently represent about 4,400 members.

Today, the union’s locals have 283 members who are Detroit residents. Within 10 years, that number will expand to 849 under the agreement. The average salary for a certified journeyman is $28 to $32 per hour, plus benefits, Jackson added.

To get involved, Detroiters can be sponsored by a contractor or come into the training center in Ferndale and sign up.

Jackson said Wednesday that the carpenters union is also working to expand its training centers by adding three more in the state, including one in Detroit.

“This agreement is the most comprehensive plan in the state to train residents for careers in the skilled trades,” Mayor Mike Duggan added in a statement released Wednesday. “Detroit residents should directly benefit from all of the construction in the city.”

The new partnership is part of the Detroit Skilled Trades Employment Program. The city intends to partner with local unions and their Joint Apprentice Training Committees to set annual goals to increase the number of Detroit members.

Richard Belue, 26, of Detroit, is slated to complete his four-year training program at the Ferndale center in June and become a journeyman. The new commitment to bring in more Detroit residents is sorely needed.

“It’s going to open up a lot of doors for a lot of people that didn’t have that opportunity,” said Belue, who has been working on construction tied to the Little Caesars Arena project downtown. “The most important thing is to give those people a chance.”

Duggan first unveiled the new effort to ensure Detroiters apprenticeship spots in December. At that time, Plumbers Local 98, the Mechanical Contractors Association of Detroit and the Joint Apprenticeship Committee announced that at least 25 percent of all new apprentices to Local 98 will be Detroit residents.

The program was introduced as a solution to hefty fines brought against contractors who failed to meet requirements laid out in an executive order from Duggan, which stated at least 51 percent of the workforce on construction projects funded by more than $3 million of public money must be “bona-fide Detroit residents.”

The city’s Department of Human Rights, which oversees that order, will also monitor compliance with unions participating in the skilled trades employment effort.

Contractors and subcontractors using participating locals will not be subject to noncompliance fees that have been assessed in the city for major development projects not meeting hiring requirements, namely the arena project, said Portia Roberson, who heads the city’s human rights office.

In the last 18 months, the city has collected close to $1 million in fees for noncompliance. Those dollars go into workforce training efforts, Roberson said.