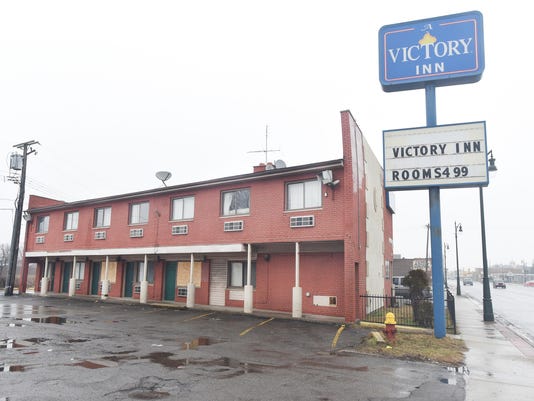 On the same day a fire tore through the shuttered Victory Inn in Detroit, federal officials indicted three more people accused of taking part in a drugs-and-prostitution operation allegedly headquartered there.

Janette Gaggo, Terry Pruitt and Harold Lashawn Nero were named in an indictment filed Wednesday in U.S. District Court in Detroit tied to the criminal enterprise that authorities allege enslaved 14 women and turned the motel on Michigan Avenue into a drug-ridden brothel.

A probe was launched Sept. 16, when a suspected human trafficking victim was taken to Detroit Receiving Hospital after ingesting heroin, court records show.

During a Jan. 12 raid, nearly 200 law enforcement personnel descended on the business in one of the largest federal sweeps in Detroit history.

Federal investigators have described the spot as a “den of iniquities” where the cocaine, heroin and flesh were sold with help from motel staff.

Investigators allege they used the motel and other nearby locales to coordinate their activities.

Deploying hotel video surveillance and human lookouts for monitoring, the group also “distributed high volumes of cocaine base and heroin to customers, and allowed customers to use those illegal narcotics within various rooms,” investigators wrote.

Some of those dealings were connected to injuries or deaths, assistant U.S. attorneys claim.

Bell, Pruitt and Nero have not yet been caught. Gaggo was arrested Thursday and arraigned in federal court. She is being held without bond temporarily and faces a court hearing on April 3.

Convicted sex offender Bryant Daugherty, an eight-time felon, and Randol, both of Detroit, were arrested in January. They were being held without bond.

Avery, the operation’s alleged lieutenant, was arrested March 17 after a weeks-long manhunt. He later briefly appeared in federal court and agreed to be locked up pending trial.

Last week, the alleged pimp leading the enterprise was identified as Bell, a convicted killer and six-time felon known as “Tone.” He has eluded federal investigators since the January raid.

Shortly after the sweep, Wayne County Circuit Judge Robert Colombo Jr. declared the Victory Inn a public nuisance and ordered the motel shuttered for one year.

But on Wednesday night, a fire ravaged several rooms there, displacing at least two people who’d been squatting inside, the Detroit Fire Department said.

The fire broke out about 11 p.m. on the second floor, and the blaze reached anywhere between four to six rooms before it was extinguished. Firefighters spent about 90 minutes putting out the fire.

The cause of the fire is unknown.

Despite the judge’s order, Deputy Fire Commissioner Dave Fornell said there is “evidence scrappers had been in the building.”

There were also two squatters on the first floor, Fornell said. One was taken to a hospital for non-fire-related injuries. That person’s gender was not immediately known, nor was their condition.

Fornell said he wasn’t sure what became of the second squatter, whose gender was also unknown.