The grant will “support thousands of Detroit high school graduates” over the next three years, officials said 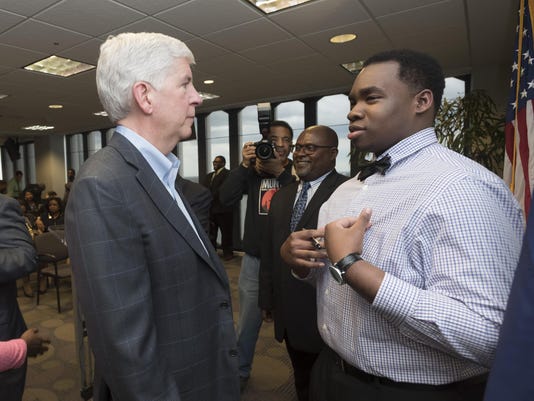 Gov. Rick Snyder, and Jonathan Land, an O.C.C. student, chat during the event Monday to announce the grant from the W.K. Kellogg Foundation to Detroit Promise.(Photo: David Guralnick / The Detroit News)Buy Photo

Detroit — A scholarship program that aims to give Detroit high school students a tuition-free path to higher education is receiving a $3.5 million gift.

Gov. Rick Snyder joined local leaders Monday to announce the grant from the W.K. Kellogg Foundation to Detroit Promise. The funding, officials said, will help support thousands of Detroit high school graduates with tuition and services as they pursue a college education over the next three years.

Detroit Promise provides free two- and four-year degrees to qualifying Detroit high school graduates who attend school and live in the city. Students can use the scholarships to support attendance at 22 participating colleges.

“This is another step forward in this process and it’s been building for a number of years,” Snyder said during a Monday news conference inside the offices of the Detroit Regional Chamber on Woodward. “We’ve been fortunate. We’ve had some great supporters already in this process.”

“We’re very proud of the fact that Detroit became the first large city in America to guarantee every one of our residents who graduated from a Detroit high school two years of community college,” Duggan added.

These five “success coaches” meet regularly with the students to help them reach their academic goals.

The coach program began this year with incoming community college freshman. Officials said about 250 are actively enrolled and participating.

“Roughly about a third of students in community college return for a second year, that’s the number we’re really trying to drive up,” Baruah said. “That’s why this campus coach program is so important.”

Scantlebury’s message on Monday was directed toward students the program is designed to serve.

“This is about all of us, saying to all of you ‘we need you to succeed, we need you to thrive and we believe that you can,’” he said. “Thank you for letting us have an opportunity to join with you Detroit and young people, it’s on you. We got you.”

Program coach Ashley Robinson serves students at Schoolcraft and Oakland community colleges and regards herself as a “motivator” who is “always in my student’s ear.”

So far, it has helped keep 18-year-old Johnathan Land on track. The Detroit teen said he wasn’t motivated after high school. But working with Robinson at OCC has helped him sort out financial aid paperwork and his options.

“At first I felt like I wasn’t going to go to college. Having this program really motivated me,” he said. “It really helped me with my life and my college career.”

Detroit Promise helps students fill financial gaps left after they have exhausted other options for aid. More than 700 students this year received two-year or four-year “last dollar” scholarships, which cover tuition and other mandatory fees not covered by federal or state grant sources, officials said.

Baruah said about 750 students are going to school under the Promise program. Each year, between 500 to 550 enter the community college and 260 others are enrolled annually in the four-year program.

Kellogg’s grant is part of a $30 million campaign by the Michigan Education Excellence Foundation, which was created by Snyder to fund the community college portion of what is now known as the Detroit Promise. Snyder on Monday said the Kellogg gift brings the effort near the $10 million mark toward its overall goal.

“We’re on our path and we’re going to continue this path,” Snyder said Monday.

Detroit Promise initially helped fund two-year associate degrees and technical certificates but was expanded last year to include the University of Michigan, Michigan State University and other four-year institutions.

Officials hope the program will eventually be funded in perpetuity through the Detroit Promise Zone Authority, launched by Duggan in March 2016 to dedicate a portion of tax dollars generated by that entity to funding the scholarships.

Detroit Promise is modeled on a similar program in Kalamazoo, which gives students the promise of a higher education thanks to an anonymous donor.

The Kalamazoo Promise, which covers tuition for the city’s high school graduates at four-year Michigan colleges and universities, inspired dozens of other communities nationwide to work on guaranteeing that students could afford higher education.

The foundation for the Detroit Promise was laid in 1989 with the Detroit Compact, which helped students pay tuition and fees at community colleges that weren't covered by Pell Grants, university awards or other scholarships. It was catapulted by Snyder's 2011 announcement that he wanted to see more Promise programs based in Michigan.

Years ago, the students who qualified for the Detroit program came from a limited number of schools in Detroit — mostly neighborhood public schools. Today, the scope has widened to include all public, charter and private schools in Detroit.

The program is open to any Detroit high school student who graduates with a 3.0 grade point average or better and scores more than 21 on the ACT or 1,060 on SAT. They also must attend college full-time.

Registration is open for Detroit high school seniors slated to graduate in this spring, with a June 30 deadline for community colleges. The university deadline was Feb. 1.

Students can visit the Detroit Regional Chamber website for information on eligibility and to register.