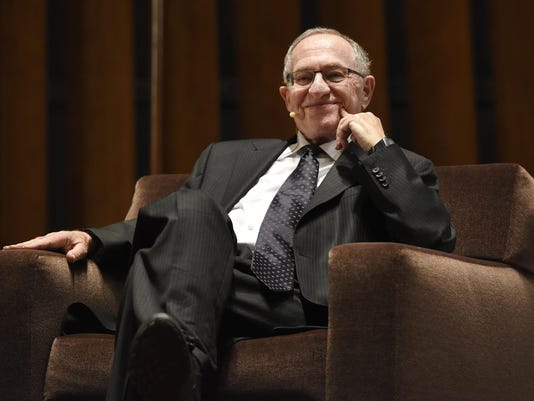 The move adds legal firepower to a defense that appears to be focused on First Amendment issues and religious freedom. Federal prosecutors allege two 7-year-old girls who were brought to Metro Detroit earlier this year suffered illegal genital mutilation but defense lawyers say the girls underwent a benign religious procedure.

Dershowitz and prominent Birmingham defense attorney Mayer Morganroth were hired about three weeks ago by the Dawat-e-Hadiyah, an international religious organization overseeing a small sect of Shia Muslim mosques around the world.

“They hired us to protect the people charged and represent the religious organization,” said Morganroth, who has represented numerous high-profile clients, including ex-Detroit Mayor Coleman A. Young, auto executive John DeLorean and Jack Kevorkian.

“I’m sure Alan will show up,” for court hearings, Morganroth said.

Their hiring by the religious organization does not indicate leaders are targets of an ongoing grand jury investigation, Morganroth said.

“No more than the Vatican would be exposed to something done in a local church,” Morganroth said.

Three people have been charged in a case that is raising awareness about a procedure practiced by some members of the sect, the Dawoodi Bohra, a religious and cultural community based in India.

Some members of the community who have spoken against the practice said female genital mutilation is performed to suppress female sexuality, reduce sexual pleasure and curb promiscuity, according to federal court records.

The procedure has been illegal in the U.S. since 1996 and there are no health benefits for girls and women, according to the World Health Organization.

Dr. Jumana Nagarwala of Northville is accused of mutilating the genitalia of two girls from Minnesota on Feb. 3 at a Livonia clinic owned by Dr. Fakhruddin Attar. The Farmington Hills man has been indicted along with his wife, Farida Attar, who is accused of helping arrange the procedure and being in the examination room during the procedure.

All three are members of the Dawoodi Bohra community. They are being held without bond pending an Oct. 10 trial in federal court in Detroit.

Fakhruddin Attar, 52, and Nagarwala, 44, face up to life in prison if convicted of conspiracy to transport minors with intent to engage in criminal sexual activity.

Farida Attar, 50, faces up to 20 years in prison if convicted of conspiring to obstruct the investigation.

The trio is accused of committing female genital mutilation, trying to cover up the crime and conspiring to cut girls as part of a procedure practiced by the Dawoodi Bohra.

Locally, most members of the sect belong to the Anjuman-e-Najmi mosque in Farmington Hills.

Defense lawyers say the procedure performed on the girls was not female genital mutilation and that the government is overreaching.

The procedures were benign, legal and religious, defense lawyers have said.

Nagarwala’s lawyer Shannon Smith said the doctor merely removed mucous membrane from the girls’ genitalia, placed the material on gauze pads and gave it to their families for burial.

Lawyers for the Attars attacked some of the government’s evidence, especially dark and blurry FBI surveillance footage from a secret FBI camera mounted outside the Livonia clinic.

The footage shows the Attars, Nagarwala and the victims at the clinic Feb. 3, the government claims.

The Attars’ lawyers said the poor quality of the FBI surveillance video prevents identifying anyone.