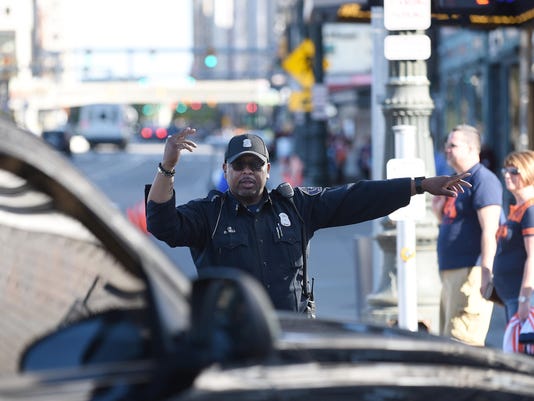 The number of overtime hours worked by Detroit police officers has skyrocketed in recent years, costing taxpayers tens of millions of dollars — but Detroit’s mayor and top cop say it’s worth it, insisting there’s a price to sustaining double-digit crime reduction.

Union officials disagree, pointing to a steady loss in staffing over the years that has forced officers to work extra shifts. They say that puts overworked cops and citizens at risk, although Police Chief James Craig said there’s a cap on how much overtime officers may work.

Detroit officers from the rank of lieutenant down who are eligible for overtime logged 765,881 overtime hours during fiscal year 2015-16, according to data obtained by The Detroit News under the Freedom of Information Act. That’s a 69 percent increase from 2012-13, when officers logged 454,136 hours of OT.

The spike in overtime has been accompanied by a drop in crime: From 2013, when Craig became police chief and enacted policies he said have led to the increase, to 2016, violent crime dropped 11.8 percent, while property offenses plunged 27 percent, according to Detroit Police statistics.

“There’s a cost of doing business, and when you talk about improving service and driving down crime, which we’ve done during this time period, I say it’s worth it,” Craig said.

Craig said there is an ongoing internal affairs investigation into overtime abuse by Detroit cops. The probe was launched in November 2014 after a supervisor in the department’s Homicide Section, Lt. Joseph Tiseo, reported officers were charging the city for time they hadn’t worked.

Seven officers are under investigation for falsely reporting overtime, Craig said. “I don’t think it’s a widespread problem,” he said. “Seven cases is a drop in the bucket.”

Union officials insist a staffing shortage is the main reason for the overtime spike. The police officer ranks fell from 1,986 in 2012 to 1,590 in 2016, a 20 percent drop. The force has about 1,700 officers, although only about 1,500 are on the street, with about 200 recruits still in the police academy, said Mark Diaz, president of the Detroit Police Officers Association.

“The bulk of our overtime issue is due to the need for more officers, and to stop the bleeding from people leaving the department for better pay and benefits,” Diaz said, adding the department loses about 20-25 officers per month in large part because Detroit pays its officers a starting annual salary of $36,000.

“The overtime issue won’t be remedied until we fix the pay and benefits issue,” he said.

Mark Young, president of the Lieutenants and Sergeants Association union, said working too much overtime can pose a safety risk.

“Some overtime is good, because it allows the officers to make extra money, and they need to with the salaries they make,” Young said. “But they also need downtime — they’re human beings working a highly stressful job. When you have tired officers, that’s a danger to them and the citizens.”

Police Commissioner Willie Burton also expressed concern too much overtime might pose a danger. “Working all that overtime is a temporary solution to the reduced manpower, and it’s working for now, but long-term, the officers won’t be able to keep it up because they’ll get burned out.”

Craig said he’s taken measures to ensure that doesn’t happen. “Most of the overtime is voluntary,” he said. “And we’ve put a cap on how many hours officers can work.” Craig said officers may not work more than 17 hours in one 24-hour period.

Craig also noted if a shift needs to be filled, he relaxed the rules to allow officers from all precincts to volunteer for the extra time, meaning officers aren’t ordered to work overtime.

Craig said as of June 2, the department was short 126 budgeted positions. “That’s good news because we’re closing the gap,” he said. “Last year, we were down 300.”

John Roach, spokesman for Mayor Mike Duggan, said in a statement: “We agree with the chief’s approach on this and believe the increased overtime is necessary. DPD is adding about 30 officers a month to the force and has the budget to add a total of 300 more officers in the next year. As staffing levels increase, the department will continue to track overtime and manage it to an optimal level based on public safety needs.

“It’s also important to understand that despite the additional overtime, DPD’s expenses this year are projected to fall within its budgeted amount and the city is projected to have an overall budget surplus for the third consecutive year when the fiscal year ends on June 30th.”

Craig acknowledged the staff shortage is one element that’s contributed to the overtime increase, but said a number of other factors are driving it.

“A year after I got here (in 2013), we created a minimum staffing deployment,” he said. “We wanted to make sure we were meeting our response-time goals. In order to do that, we had to ensure that we met minimum staffing.

“Staffing was dictated by priority calls handled, crimes, geographic footprint of a particular precinct; we came up with a formula for each precinct. When we created that — which is the way policing is done — there’s a cost. If a command does not meet minimum staffing, they’re authorized to fill that car with overtime.

“Minimum staffing requirements weren’t in place when I got here; that’s why we had a one-hour response time.”

The chief said response time has been whittled to 12 minutes, although the decrease is partially due to Craig changing the way response time is calculated.

A $75 million budget cut to the police department in the 2012-13 fiscal year — which represented 18 percent of the total budget — forced the department to shed 380 officers. In 2012, then-Mayor Dave Bing tried to offset the cuts by closing police precincts from 4 p.m.-8 a.m., creating “virtual precincts” and requiring officers to work 12-hour shifts.

When Craig assumed command of the police department the following year, he was given the power to make unilateral decisions by Emergency Manager Kevyn Orr. Among the new chief’s first moves was to restore police precincts to 24-hour service and put officers back on eight-hour shifts.

Craig also got rid of police districts, a model implemented in 2005 by former Mayor Kwame Kilpatrick, in which multiple precincts were combined to cut costs. Craig restored the 12 individual precincts, which he said better serve the community.

“I didn’t think the district model facilitated neighborhood policing, so we went back to what I refer to as neighborhood precincts,” Craig said. “And the 12-hour days were killing morale among the officers.”

Craig also created new ranks, including detective and corporal, which he said is a morale-booster because it gives cops a chance to advance.

“Since I got here, I’ve done 822 promotions,” he said. Prior to his arrival, the department hadn’t offered a promotional examination for eight years.

“Police officers want advancement, but they weren’t getting the opportunity before,” he said. “Well, all that costs money.”

Craig said officers on mandatory standby now are paid overtime, which he said wasn’t being done when he took over.

“It’s the law: If you want someone on mandatory standby you’ve got to pay them one hour of overtime for every eight hours they’re on standby,” Craig said. “When I got here, the way it was done was, if you wanted to work in those specialty units like homicide, you didn’t get that money, and if you wanted to stay in those units, you didn’t complain.”

Diaz said only a small number of officers are on standby duty. “I don’t think that’s a big factor,” he said.

“We had a good year last year, and so far this year, we’re trending below that,” Craig said. “As of June 4, overall crime is down 9 percent. That’s phenomenal. But there’s a cost to sustaining that downward trend. It’s worth the tradeoff.”