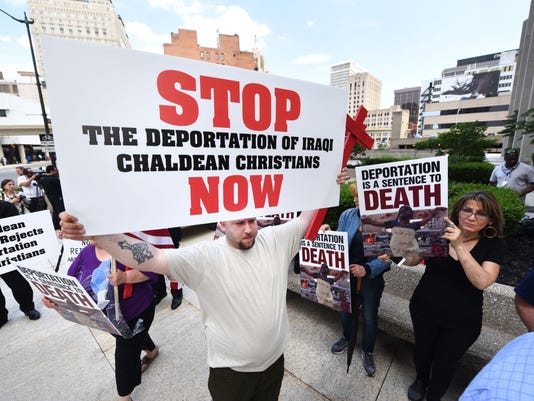 Jeremiah Suleiman of Sterling Heights holds a sign in protest of the deportation of Iraqi-American immigrants.(Photo: Max Ortiz / The Detroit News)Buy Photo

Detroit –  Detained Iraqi immigrants won another legal victory Tuesday when a judge ruled that federal courts have jurisdiction to delay their deportation.

U.S. District Judge Mark Goldsmith during a review of removal orders issued by the government granted an injunction against deporting more than 1,400 Iraqi nationals nationwide who face removal, including 114 Iraqis arrested last month in Metro Detroit.

Goldsmith also ruled that a stay halting the deportations will remain in force until July 24.

In his ruling, the judge said “the substantiated risk of death, torture or other grave persecution” to the detainees outweighs Congress’ authority to bar federal district courts from jurisdiction over “the kind of habeas claims that Petitioners assert here challenging their repatriation to Iraq.”

Goldsmith said that to enforce the congressional mandate that federal district courts lack jurisdiction “... would effectively suspend the write of habeas corpus, which the Constitution prohibits,” he wrote. “The Supreme Court has instructed, ‘It must never be forgotten that the write of habeas corpus is the precious safeguard of personal liberty and there is no higher duty than to maintain it unimpaired.’”

Kary Moss, executive director of the American Civil Liberties Union of Michigan, which filed a class-action lawsuit in June to halt the deportations, said in a Facebook post the ruling means Goldsmith will keep the case in his court “instead of sending it to immigration courts” as he considers the legal claims of the immigrants.

The arrests of the Iraqi nationals occurred after a March agreement between the U.S. and Iraq that said Iraq would accept deportees for the first time in seven years. They are being held at a detention center in Youngstown, Ohio. Immigration officials have said those targeted in the raids committed crimes, some as serious as murder and rape, and they have forfeited their right to remain in the U.S.

The Department of Justice has argued Goldsmith lacks jurisdiction and that requests to bar deportation of the detainees should be heard by federal immigration courts.

“This case pits the power of Congress to control the jurisdiction of the federal courts against the Constitution’s command that the writ of habeas corpus must be preserved,” Goldsmith wrote. “Both sides in this clash are right, in part. The Government is correct that Congress meant to strip federal district courts of jurisdiction to entertain the kind of habeas claims that Petitioners assert here challenging their repatriation to Iraq. But Petitioners are correct that extraordinary circumstances exist that will likely render their habeas claims meaningless, unless this Court intervenes to stay their deportation while review of their removal orders proceeds before the immigration courts and the courts of appeals.”

Rula Aoun, director of the Arab-American Civil Rights League, said the court decided it needs time to pursue the Iraqis’ motions to remain in the U.S. because it would violate the Constitution not to. “The court has realized it’s not a realistic possibility to have these motions opened before the detainees are deported and there’s no doubt it would take more than a year,” Aoun said Tuesday.

The ruling was welcomed by activists working to help the Iraqis stay.

Crystal Kassab Jabiro, a volunteer with Code Legal Aid, a nonprofit organization helping the immigrants with legal counsel, said the group is constantly updating families on action in the case.

“I tell families what today means is the judge has ruled ...  that he has the right to rule before anyone’s deported,” Kassab Jabiro said. “He’s going to let them hear their cases.

We know it’s a limited relief and we are telling everyone that. It doesn’t mean that it’s over.

“Overall, it’s a great triumph for the ACLU of Michigan, for those detainees and their families.”

She added that community members remain apprehensive and afraid to ask questions about their loved ones because they are stymied by the legal process.

U.S. Rep. Sandy Levin applauded the district court’s assertion of jurisdiction because of the extraordinary danger of returning the detainees to Iraq.

“This order will allow the court to learn all of the facts related to these individuals who were arrested for deportation after living in the U.S. for many years, and in some cases, decades,” said Levin, D-Royal Oak, in a statement.

Nathan Kalasho, an advocate for  immigrant families at Key Grace Academy, which he operates in Madison Heights, said the academy has become a hub for members seeking counsel.

“Several of my students are Chaldean-American and have been affected by this,” he said. “These motions can cost upwards of $80,000 ... The judge ruled that these people are able to (pursue) due process and sometimes that takes some time.”