He said advertising slogan has been killed. 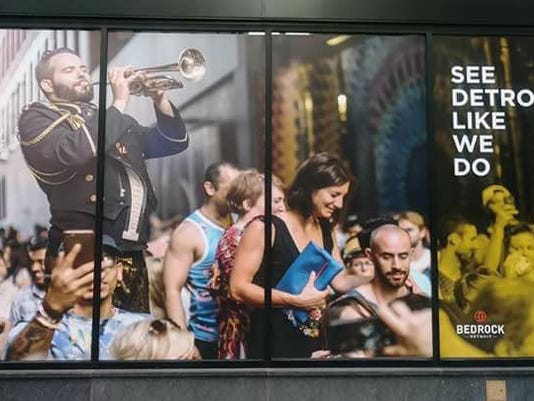 Dan Gilbert has issued an apology for an advertisement on a downtown Detroit building that ignited a social media firestorm.

He also said his Bedrock Detroit commercial real estate firm has killed the “See Detroit As We Do” marketing slogan.

“We screwed up badly the graphic package that was partially installed on the retail windows of the first floor of the Vinton Building, in downtown Detroit, a structure we have been rebuilding for over two years and is nearing completion,” the Detroit businessman and billionaire said in an open letter posted late Sunday on Bedrock Detroit’s Facebook page.

“Although not intended to create the kind of feelings it did, the slogan/statement we used on these graphics was tone deaf, in poor taste and does not reflect a single value or philosophy that we stand for at Bedrock Development or in our entire Family of companies,” the letter said. “We have killed the ‘See Detroit As We Do’ campaign.”

Bedrock Detroit also tweeted out a link to Gilbert’s apology.

The display was installed Friday on the building, located on Woodward Avenue at Congress Street, Gilbert said.

It quickly drew criticism on social media for only depicting white people and not including any people of color. Detroit’s population is 82.7 percent African-American, 10.6 percent white and 6.8 percent Hispanic, according to the U.S. Census.

“Wow. @BedrockDetroit get it together. This is not a representation of my city. Do better,” one person Tweeted Sunday about the display.

Gilbert said the advertising wasn’t finished when the controversy erupted.

“This past Friday, the installers of the graphic package put up just a portion of the entire installation. The graphic that was completed Friday was unfortunately, not diverse or inclusive when looked at by itself. The remaining graphics were scheduled to be installed and completed early this upcoming week.

“As soon as we realized on Saturday that the partial installation would completely distort our vision for the finished project, we removed it so it would not cause further misinterpretation and confusion.”

Gilbert concluded his message by saying the finished display “would have been in line with our strong beliefs that all of our advertising and marketing reflect the communities where we do business and our work force, we have still tabled this particular campaign and will take the feedback and lessons learned here to even further examine our content, processes and even installation schedules to improve in all that we do. We'll be better at this next time.”

Based in Detroit, Bedrock specializes in developing urban downtown areas and owns more than 90 properties that covers more than 15 million square feet. It boasts being “the largest real estate partner in downtown Detroit with a strong presence in Cleveland.”