The technology, known as CLEAR, uses a fan’s biometrics — their fingerprints — to verify their identity 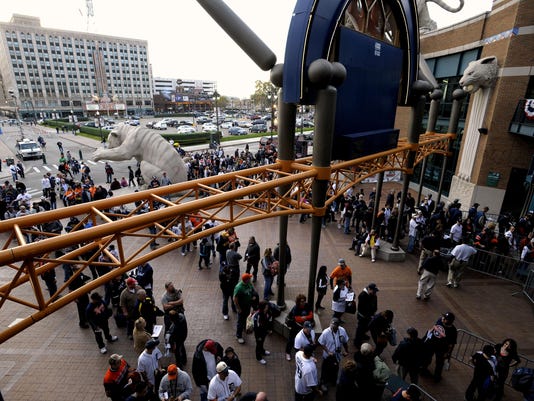 With the touch of a finger Tigers fans will be able to speed up entry at an exclusive gate at Comerica Park starting Tuesday. The technology, known as CLEAR, uses a fan’s biometrics — their fingerprints — to verify their identity.(Photo: Todd McInturf / Detroit News file)

With the touch of a finger Tigers fans will be able to speed up entry at an exclusive gate at Comerica Park starting Tuesday.

The technology, known as CLEAR, uses a fan’s biometrics — their fingerprints — to verify their identity.

Fans will still have to go through security and show their game tickets. However, for those willing to scan their fingers at Gate A, they’ll have access to shorter lines.

“It’s an added layer of security and the benefit is passed back to the fans who want to sign up for the faster VIP lines,” said Ed O’Brien, head of sports for CLEAR, based in New York. As fan interest increases, more lanes will be added, he said.

Here’s how it works: a fan walks up to the CLEAR kiosk and scans his or her fingerprints, then proceeds to a security check. Fewer people using the lane speeds up the process.

O’Brien said the park can use the scanned information to track who is entering the park and at what times.

“As we continue to identify opportunities to enhance the game day experience, CLEAR provides us with an enhancement whereas patrons can enter Comerica Park in a quicker and convenient manner, without compromising their safety and security,” said Mike Healy, vice president of ballpark operations for Comerica Park.

Ron Colangelo, vice president of communications for the Tigers, said it’s hard to anticipate how the system might speed up lines at the park.

“Closest to the first pitch is going to be a little longer line,” he said. “It all depends on attendance as well. Some gates have higher traffic than others.”

Colangelo said the system is the latest in technological enhancements the park has made in recent years including a high definition video board in left field and Wi-Fi installation.

In the future, CLEAR officials say they have plans to add information to customer profile’s such as game tickets.

“What else can we process where an identity or transaction is needed?” O’Brien said. “We’re in discussions with ticketing companies. People could possibly get into the stadium and never have to pull a ticket out of their pocket.”

Comerica Park is the seventh major sports venue to provide the service. The others are Coors Field in Denver, AmericanAirlines Arena and Marlins Park in Miami, AT&T Park in San Francisco and Citi Field and Yankee Stadium in New York.

Starting Tuesday, Tigers fans can enroll in the system for free at the ballpark with a state-issued driver’s license. The process takes less than five minutes and can be used immediately.

For $15 a month, an account holder can upgrade to use their account at 23 airports including Detroit Metropolitan Airport, which began the service in October. Travelers use their fingerprints or an eye scan to verify their identity.

Erica Donerson, spokeswoman for Detroit Metro Airport, said Monday she did not have information on CLEAR’s impact on wait times. She said CLEAR customers are still required to go through TSA screening.