Duggan, Young accept invite to debate each other

Duggan, Young accept invite to debate each other 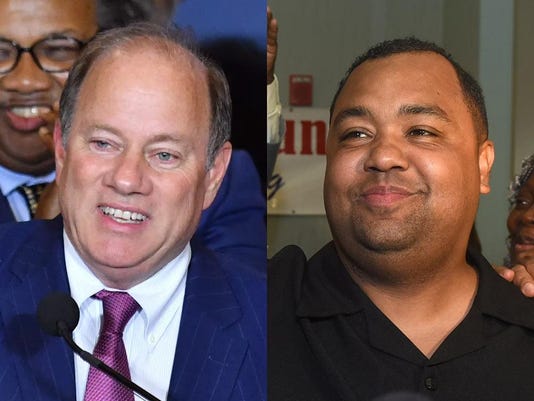 Detroit — Mayor Mike Duggan and state Sen. Coleman Young II have agreed to debate each other this fall.

Both campaigns confirmed Thursday they had accepted the invitation for the debate which will be held in the WDIV-TV (Channel 4) studio. The debate will be sponsored by The Detroit News, WDIV-TV and WTVS-TV (Channel 56).

It is tentatively scheduled for 8 p.m. Oct. 25, the date proposed by organizers, but Young’s campaign manager, Adolph Mongo, said Thursday that the candidate had agreed to a debate but not the date.

Duggan campaign spokeswoman Sharon Banks said both Duggan and Young’s campaigns will look to negotiate topics of discussion and rules of engagement prior to the debate. The mayor’s participation is contingent upon both campaigns agreeing to the terms, she said Thursday night.

“We’re looking forward to the debate and working out the details, format and structure,” she said.

The debate comes after Young and his campaign called multiple times for the mayor to come together with Young to publicly discuss their plans for Detroit.

Young has criticized Duggan for neglecting neighborhoods and a federal criminal investigation into the city’s demolition program.

“We want to talk about the neighborhoods,” Young’s campaign manager, Adolph Mongo, said Thursday. “Because they have been invisible to the city.”

Duggan, who is seeking a second, four-year term, has said his campaign will stay focused on building a unified city and that he won’t be engaging in mudslinging with Young.

Duggan received 69 percent of the vote in the August primary to 27 percent for Young, son of Coleman A. Young, the city’s first black mayor, according to unofficial results.

Duggan also secured the vast majority of the prominent endorsements and raised more than $1.6 million compared with Young’s $22,000.