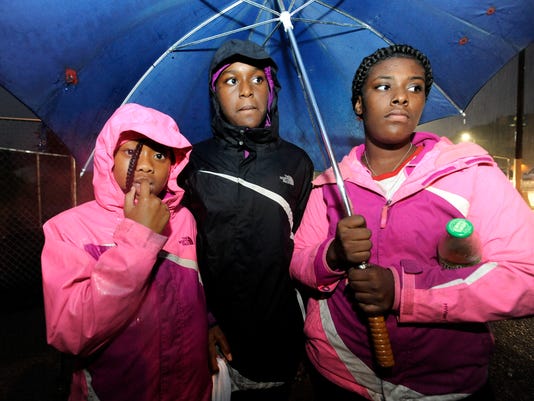 Even though the candlelight vigil for Demond Grimes was postponed Tuesday because of the rain his friends, including left to right, Jamira Stokes, 11, Makalia Hamilton, 12, and her sister Natavia Hamilton, 13, all of Detroit, talk about Grimes on Rossini Drive, just west of Gratiot in Detroit, Monday night.(Photo: Todd McInturf, The Detroit News)Buy Photo

Detroit — Police have launched an investigation into a police pursuit Saturday that ended when a state trooper used a stun gun on a 15-year-old ATV driver, who crashed into a pickup and died.

Demond Grimes was killed about 5:30 p.m. Saturday at Rossini and Gratiot on Detroit’s east side. State police, who patrol the 9th Precinct as part of the Secure Cities partnership, say Grimes was driving the ATV on the street, which is illegal, so the trooper ordered him to pull over.

State police Lt. Mike Shaw said Grimes didn’t comply, so the trooper pursued him. At some point during the chase, the trooper deployed his Taser, striking the boy, who then drove the ATV over a curb and slammed into the back of a pickup.

Troopers rendered first aid before medics arrived and began treatment. Grimes was transported to St. John Hospital, where he died. Shaw said the pursuit was over within 49 seconds.

The trooper was suspended Sunday, with Shaw adding: “We had to look at the facts before making a decision (to suspend the trooper).

“We’ll do our own investigation, which we’ll forward to the prosecutor,” Shaw said. “If there’s a determination that a crime or a felony took place, his status will change.”

Shaw added the trooper was suspended because he violated a policy forbidding using a stun gun in a moving vehicle.

Shaw said state police are using troopers from the 1st District in Lansing for the agency’s internal probe. He said investigators are looking into why the trooper deployed his stun gun.

Craig said he decided Monday to launch his inquiry.

“Anytime we have a situation that involves a death with another police agency involved, it warrants an independent investigation,” Craig said. “This in no way suggests any impropriety on the part of the Michigan State Police.”

The Wayne County Prosecutor’s Office would evaluate the recommendations from the separate police probes as part of its own investigation.

Several law enforcement agencies patrol Detroit, all with their own policies governing vehicle chases. Detroit police restrict chases to violent felons, and even then there isn’t always a pursuit, Craig said.

“Even in the case of a felony, there are a lot of factors to consider: Time of day, road conditions, what impact there might be to the public,” Craig said. “I’m a firm believer that in the event of a pursuit, particularly one that causes a danger to the public, our airship should monitor it.”

Craig added most situations don’t call for chasing someone — “particularly when you talk about a traffic infraction or a misdemeanor,” he said.

State police follow the agency’s own chase policy, even if they’re patrolling in cities that have differing rules, Shaw said.

“Our policy is also very restrictive,” Shaw said. “We teach troopers to take numerous things into (account): what the speed is, age, weather conditions, danger to public. Our helicopters often fly over Detroit, but in this case, it wouldn’t have mattered because the incident was over so fast.”

Meanwhile, friends and others gathered Monday night near the crash scene for a vigil that was postponed because of rain.

“We never thought we would lose someone so important to us to the police,” said Natavia Hamilton, 13, a longtime friend who turned out to honor her friend before she learned the vigil was postponed.

The death highlights a need for policy change, said Sam Riddle, who is active with the National Action Network.

“No one’s life was in danger but his,” he said near the crash scene Monday night. “There must be a policy in Detroit that addresses this and the inhumane manner of outside police agencies using Detroiters for target practice.”

Police chases have proven deadly throughout the years.

In January, two men were killed when Detroit officers from the 10th Precinct chased a minivan after a traffic stop. The minivan crashed into another vehicle, resulting in both deaths.

In June 2015, Makiah Jackson, 3, and Michaelangelo Jackson, 6, were killed while Detroit police chased parole absconder Lorenzo Harris, who drove his car 95 mph through an east side neighborhood as he tried to elude officers. He was convicted of two charges of involuntary manslaughter and sentenced to 30-50 years in prison.

Both Craig and Shaw said ATVs are a growing problem in Detroit and nationwide.

“We’re aware of complaints of young people who engage in ... racing (ATVs),” Craig said. “In the 9th Precinct, they would taunt the police, doing wheelies in front of police cars.

“But it amounts to a misdemeanor at best, so our officers know not to pursue. It’s too much risk.”