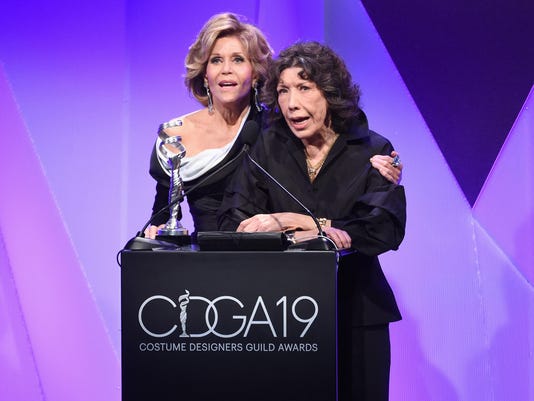 Correction: This story has been updated to correct the Michigan minimum wage.

Actors Jane Fonda and Lily Tomlin, stars of the Netflix comedy/drama “Grace and Frankie,” are touring the state promoting the One Fair Wage campaign along with Restaurant Opportunities Centers United.

The women are speaking at Wayne State University Thursday, Sept. 14, from 1-2 p.m. in the General Lecturers Room 150 at 5054 Anthony Wayne Drive in Detroit.

On Friday, they’ll be at the Power Center for the Performing Arts on the campus of University of Michigan, 121 Fletcher in Ann Arbor, from 1:30-3 p.m.

Tickets are not required for either event. A third event was held Tuesday morning at Kalamazoo College. Visit rocunited.org for more info.

Fonda, Tomlin and the ROC United are trying to drum up support for a statewide ballot initiative to raise the minimum wage of restaurant workers from $8.90 to $12 an hour in 2022.

According to the Associated Press, organizers need hundreds of thousands of signatures from voters to get the initiative on the ballot.

Tomlin is a Detroit native. Both award-winning actresses are known for their political activism.