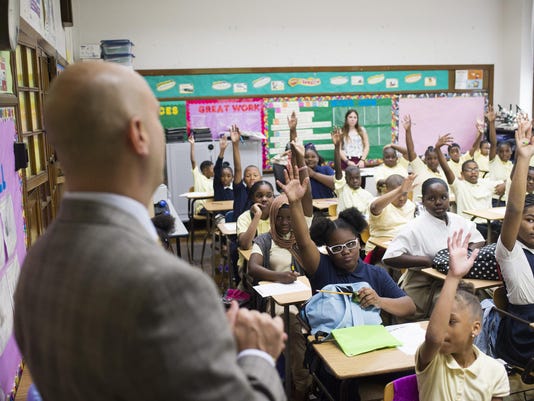 Nikolai Vitti, superintendent of Detroit Public Schools Community District, left, asks students to raise their hands if they attended Bagley last year as part of his visit during the first day of school on Sept. 5.(Photo: Rachel Woolf / Special to The Detroit News)Buy Photo

Detroit — The Detroit Public Schools Community District has hired an additional 56 teachers in the last two weeks, reducing its teacher shortage to 194 vacancies, but its superintendent said he will continue to search for and hire teachers until that number is zero.

The district is using substitute teachers while it looks for candidates, Vitti said, and has only hired certified teachers to fill vacancies. This week, district officials will review teacher allocations and make adjustments at schools where enrollment is lower than expected, he said.

“We are continuing to hire until we eliminate vacancies,” Vitti said. “After leveling occurs, we will begin to address larger class sizes. The challenge in this area is not funding additional teachers but hiring them.”

Vitti says he hopes he can attract more teacher candidates with the district’s approved three-year contract for teachers and staff at the Detroit Federation of Teachers.

There will be no reduction in salaries, wages or other forms of compensation for members for the 2019-20 school year, union officials said, and there is a potential for an additional wage increase in the third year.

Union officials said the contract provides raises for the first time in a decade and unfreezes steps.

Student enrollment as of Friday was 47,811, Vitti said. The number of students enrolled via the district’s database was 55,874 on the first day of school. The district had budgeted for 48,524 students.

Vitti said new students continue to enroll and will continue to show up for school during the next few weeks, as is the norm in the district.

“We are continuing to trend positively, even as compared to last year, but actual enrollment numbers will not be verified until count day and week, which will be in early October. As I indicated, many students in Detroit historically enroll after the first day until count day/week. However, all signs point to meeting or nearing our enrollment projections for this year’s budget,” he said.

This is the first full school year that DPSCD has a locally elected school board and a superintendent after being under state control for nearly a decade.