Albert E. Cobo campaigns for governor in 1956. The Detroit mayor was a frequent target of civil rights groups.(Photo: File photo)

Detroit — Some say his “divisive” policies fueled the city’s racial divide. Others insist he acted with a central goal of improving Detroit.

The legacy of the late Detroit Mayor Albert E. Cobo is coming under renewed debate amid a call to rename the downtown convention center that bears his name.

The Republican businessman has been heavily criticized for spearheading urban renewal projects that razed black neighborhoods. He was lambasted throughout his career by civil rights groups that accused him of moving too slowly in response to harassment and police brutality against the city’s black residents and for continuing the city’s longstanding housing segregation policy.

One of Cobo’s granddaughters, Sally Collman McMillan, acknowledges Detroit’s segregation issues during that period but said it doesn’t mean her grandfather was a “racist.”

“In all those years, I never ever heard him say anything negative about anyone because of their race,” she said.

Cobo, she said, was a hard-working man. He was intelligent and “put himself completely into what he did,” said McMillan, 74, of her maternal grandfather.

“He was a man who cared very much for his city and did what he thought was best to make it a place to live in and come back to. It’s obvious you don’t always make everybody happy. In his heart, I think he felt he was doing what was best for the city of Detroit. That to him was so important.” 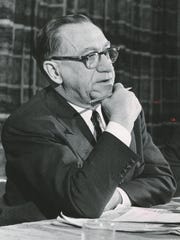 Recent calls to purge Cobo’s name from the facility come as cities across the country debate the fate of controversial statues in public places. At the same time, the convention center’s board said it has independently been exploring the option of marketing naming rights for nearly a year.

Detroit Mayor Mike Duggan has insisted Cobo’s tenure was about “government by exclusion,” and criticized his predecessor during a speech at the Mackinac Policy Conference in May.

Duggan recently raised the prospect of renaming Cobo Center with the Detroit Regional Convention Facility Authority, which oversees the facility.

Detroit historian Ken Coleman said Cobo, a former candy store owner who served seven terms as city treasurer before being elected mayor, was no friend to the city’s black community.

“I was born 10 years after Cobo died, so I have to rely on what people who were around back then said about him, and Dr. Arthur Johnson (longtime head of the Detroit NAACP) called him a racist twice in his memoir,” Coleman said. “And a federal judge in 1954 said Detroit’s Housing Commission was practicing racial discrimination.”

Shortly after Cobo began his first term as mayor, he and the Housing Commission were sued in federal court by black veterans who said they were barred from moving into all-white public housing projects.

Four years after the suit was filed, federal Judge Arthur Lederle in 1954 ordered the city to end a longstanding policy of public housing segregation.

When asked about a magazine article that said Cobo had lost his battle to maintain housing segregation, Cobo replied: “We couldn’t lose the fight because we didn’t ask for segregation,” according to the Aug. 1, 1956, Detroit Free Press. “The NAACP took us to court and we asked for time to (desegregate public housing) in a reasonable way.”

U.S. District Judge Avern Cohn, whose father was friends with Cobo, acknowledged the former mayor “wasn’t forward-looking in terms of racial relationships — (but) nobody else was either.”

Longtime Michigan political analyst Bill Ballenger, who was a teenager when Cobo was in office, said historical perspectives have dramatically changed in the past 60 years and the attacks on Cobo’s character are unfair.

Ballenger noted Cobo, who did not pursue a fourth term, instead became the GOP’s draft candidate for governor in the 1956 election against Democrat G. Mennen Williams.

“I find it hard to believe that ... there was a widespread perception that he was a racist and it somehow is a badge of shame for Detroit to have his name on Cobo Center,” Ballenger said.

“Obviously, he was well-enough thought of as a former mayor to have Cobo Arena named after him.” 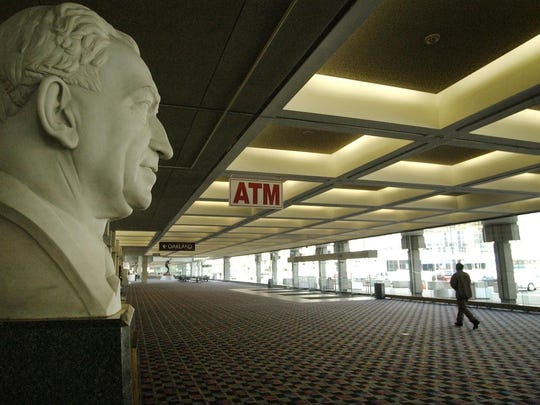 Some want Cobo Center to drop the name of the mayor, whose bust adorns its hallway. (Photo: John T. Greilick / The Detroit News)

“By the 1950s, Detroit was a tinderbox of racial tension,” said Sugrue, who authored “The Origins of the Urban Crisis: Race and Inequality in Postwar Detroit.”

“It was a period when the deep racial tension over territory of turf was playing out on a daily basis in Detroit.”

Cobo threw his hat into the mayoral race in 1949 against Democrat George Edwards, president of the common council (now City Council), who had the support of the city’s unions and black leadership.

Although some accounts claim Cobo ran one of Detroit’s most racially divisive mayoral races in the city’s history, he courted the black vote in some election documents.

According to an Oct. 29, 1949, Michigan Chronicle article, Cobo was asked at a campaign event what he would do if whites objected to African-Americans moving into their communities.

“I believe housing can be built without moving large groups of people into other neighborhoods,” Cobo said. “I think the city of Detroit can go a long way toward clearing the slums. I think we can build a beautiful environment for the people of these areas without the necessity of moving them into outlying districts.”

“You can look at the ’50s in Detroit for people of color as its very own version of Jim Crow,” she said.

After Cobo trounced Edwards in the election, a columnist for the black weekly Detroit Tribune said a portion of the black community supported Cobo. At the time, Detroit was 83.6 percent white and 16.2 percent African-American, according to U.S. Census figures.

“Even though the Negro vote was not as heavy in their biggest districts for the election of ... Cobo ... the Negro did play a large and active part in the election,” wrote Tribune columnist Ulysses W. Boykin, who later became a vice president at WGPR-TV. “Their work was responsible for Cobo’s gain in the predominantly Negro districts.”

In one correspondence reviewed by The News, Cobo defended his treatment of African Americans, writing to a resident in 1950: “Of course, Negroes are human beings and the great majority of them are good people and good citizens. You may be sure that they will continue to be treated fairly as long as I am Mayor.”

But Sugrue said Cobo weakened the city’s Interracial Committee, which was responsible for addressing racial tensions and investigating violence against blacks in Detroit, by replacing panel members with political appointees. Cobo complained the committee failed to dispel “untruths” being spread that his slum clearance program was driven by race.

The development of freeways, Sugrue said, “followed the path of least resistance,” in areas whose mostly black residents had “little power and little political voice.”

Duggan has said the convention center, built in 1960 and renovated in 2015, is an “international symbol” and he felt “something should be done.” The authority, he noted, needs the revenue, and encouraged the board to “make it a short process.”

Earlier last month the authority chairman told The News a name change could take two years to carry out.

June Manning Thomas, a professor of urban and regional planning at the University of Michigan Taubman College of Architecture and Urban Planning, said she doesn’t think purging Cobo’s name from the facility is a priority.

“I’d say if they had an opportunity to name it after someone more acceptable to everyone, such as Joe Louis, that would be splendid,” she said. “But I’m not losing sleep over this at night. I feel more strongly about Orville Hubbard in Dearborn.”

Urban renewal, the land redevelopment program that intensified in the 1940s in areas of moderate to high-density urban land use, was already in process when Cobo took office, Thomas noted.

McMillan said she realizes Cobo Center has been losing money in recent years and understands selling the naming rights might be necessary.

“But to turn around and turn it into a racial issue is what has me upset,” she said. “It’s upsetting to call someone racist when they aren’t here to defend themselves.”