Detroit — FBI agents spent years listening to the phone calls of more than a dozen people, including some politicians and businessmen, as part of a widening investigation of public corruption in Metro Detroit, according to sealed federal court records.

The latest in a series of sealed records obtained by The Detroit News shows FBI agents tapped at least a dozen phones during a probe that led investigators to start orbiting the lucrative world of municipal sewer projects and former Macomb County Public Works Commissioner Anthony Marrocco.

The records offer insight into potential new targets and illustrate how the FBI built a case that’s led to charges against 18 people so far and more than a dozen convictions.

A chronology of events outlined in sealed wiretap records shows that by late summer 2014, investigators had started tapping three phones so they could listen to conversations involving Marrocco, a manager employed by a Macomb Public Works contractor and a county employee who worked in the public works office. Marrocco has not been charged with a crime.

“If you’re someone’s lawyer, you have to be deeply concerned when you see how long the government has been wiretapping people,” said Peter Henning, a Wayne State University law professor and former federal prosecutor. “Wiretaps are such powerful evidence because they are unguarded statements by potential defendants and, oh god, do the f-bombs fly.”

An FBI spokesman could not be reached for comment Thursday.

The FBI investigation is detailed in an application to continue tapping the cellphone of Detroit towing titan Gasper Fiore. The 2016 affidavit by FBI Special Agent Robert Beeckman was temporarily unsealed in federal court and obtained by The News before a judge resealed the document.

A court filing by Assistant U.S. Attorney Michael Bullotta from 2016 said there was probable cause that the target subjects “are engaged in the payment and receipt of bribes and corrupt payments.”

The list of target subjects included Fiore’s daughter, Jennifer. After The News published the list of names, the U.S. Attorney’s Office notified her lawyer, Christopher Andreoff, that Jennifer Fiore, sister Jessica Lucas, her husband Michael Lucas and Jennifer Fiore’s mother Joan Fiore, were not targets of any federal investigation.

The records, for the first time, publicly mention Marrocco in a criminal investigation that has led to charges against his former right-hand man, Dino Bucci.

By summer 2016, the FBI had tapped at least 10 phones, and separate court records indicate agents also tapped the phone of Marrocco’s former top aide, Bucci. Bucci was indicted in November and accused of receiving hundreds of thousands of dollars while extorting engineering contractors who wanted public contracts, forcing county employees to drive his child to school and plow snow at his home.

The indictment and court records portray Bucci as a bully who used a disposable burner cellphone commonly used by drug dealers to evade law enforcement surveillance. FBI agents learned about the burner phone and tapped it, according to court records.

The wiretaps started as early as August 2014. That’s when FBI agents obtained a court order to tap the phone of Paul Modi, a Macomb County engineering contractor.

What led agents to Modi, 48, is unclear but investigators had analyzed incoming and outgoing messages and focused on several contacts to determine if any were involved in bribery or corruption, according to the government.

The short list of people in contact with Modi that drew FBI attention, according to the court filing, included Bucci and Marrocco, a once-powerful political figure who helped award work worth millions of dollars to firms that bid or received contracts from the public works office.

One such firm is Motor City Electric, a Detroit company that installed and operated electronic controls for Macomb County’s sanitary sewers. In the last two years, the firm has been paid approximately $1.3 million — including a $750,000 no-bid contract to upgrade the system last year, according to public works spokesman Dan Heaton.

“The contract was never sent out for bid,” Heaton said Thursday. “That was awarded, ultimately, by Marrocco.”

Marrocco, who left office in January, could not be reached for comment. 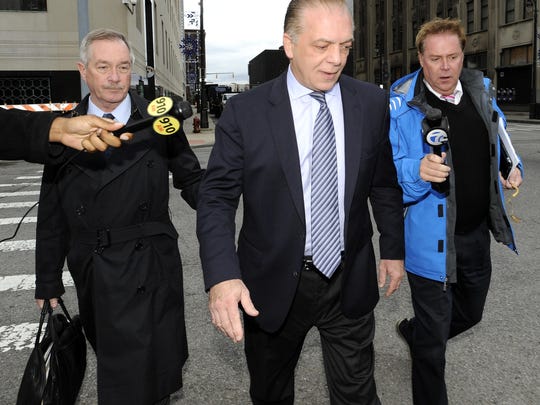 Motor City is not named by the FBI agent in the sealed filing, but one of the company’s managers is Robert Maechtle, 47, of Sterling Heights.

Maechtle was the liaison between the company and Marrocco’s office, according to the county spokesman. Maechtle’s name appears in federal court records among a list of people in communication with Modi’s phone that FBI agents intended to intercept.

“Motor City Electric respects the federal investigation and is thankful that the hard work is starting to clean up corruption in Macomb County,” company lawyer Todd Flood told The News. “We will continue to support Mr. Maechtle and work with the government if called upon. Motor City Electric will continue to set the gold standard for both work quality and ethics in the industry.”

Agents also wanted to intercept any communication between Modi and Jason Matteo, according to court records. That’s the same name of the former chief engineer in Marrocco’s office.

Matteo, 41, of Shelby Township, was chief engineer for three years until resigning in April 2016.

Weeks later, Matteo was offered a consulting contract with Marrocco’s office, but the deal was never signed, Heaton said. The reason: County rules bar employees from being paid as consultants for 12 months after they leave.

Matteo did not respond to a message seeking comment Thursday.

The Modi wiretap lasted until September 2014. Modi was charged almost three years later with one count of conspiracy to bribe a Washington Township public official, struck a plea deal and agreed to cooperate with investigators.

In October 2014, one month after Modi’s wiretap ended, FBI agents started listening to another phone.

The phone belonged to engineering firm owner Fazal Khan, 56, of Troy, according to court records.

The Khan wiretap lasted until November 2014.

That month, FBI agents tapped the cellphone of Maechtle, the Motor City Electric manager. Investigators wanted to listen to conversations between Maechtle and several people, including Bucci, Marrocco, Modi and Matteo.

The list also included James Pistilli, 68, of Holly. Pistilli worked for the engineering firm Giffels Webster, a company that has numerous municipal contracts in Metro Detroit.

Pistilli was charged in federal court in September and accused of funneling bribes to a Washington Township official. He later struck a plea deal and is awaiting sentencing.

Pistilli previously worked for Marrocco as Macomb County’s chief engineer. His successor: Matteo, according to the county spokesman.

The Maechtle wiretap ended in January 2015.

“Mr. Maechtle’s phone was the subject of a federal wiretap for a very short time,” his defense lawyer, John Shea, said Thursday. “It is our understanding that nothing of value was obtained. Mr. Maechtle, otherwise, has been fully cooperative with the government.”

After Maechtle’s wiretap ended, investigators obtained another court order to listen to the cellphone of Clinton Township Trustee Dean Reynolds. The wiretap lasted for four months until October 2015, one year before Reynolds was charged and accused of pocketing bribes.

Investigators wanted to listen to phone calls between Reynolds and several people, including Bucci and Macomb County trash hauler Chuck Rizzo, 47, of Bloomfield Hills, according to court records.

The wiretaps led to one apparent dead end.

In December 2015, the FBI tapped the cellphone of Florida trash businessman Curtis Agius, a Rizzo friend and former colleague.

The wiretap lasted for a few weeks before being discontinued in February 2016. That year, Agius recalls, FBI agents arrived at his house for an unannounced visit to talk about Rizzo.

“Guilt by association, I guess,” Agius, 47, said Thursday, laughing. “The FBI came to my house, I came down in my T-shirt and underwear and sat at the table and had coffee and we talked. After about five or six questions, they left.

“I got nothing to hide, come on in. If you live a clean life, you don’t have to worry about anything like this.”