An irate customer who was upset about the price of an item started trashing a northwest Detroit Marathon gas station last month, prompting manager Sadek Kaid to dial 911.

When the police didn’t respond after several minutes, Kaid said he hit redial and asked why.

“The dispatcher said, ‘It’s because you don’t have the Green Light,’ ” Kaid said. “The customer was in here destroying the store, throwing everything off the shelves. He was here for almost an hour before he left. When the police finally came, they told us the Green Light locations get priority.”

Businesses pay between $4,000 and $6,000 to join Project Green Light, a program that allows police to monitor businesses’ video surveillance feeds in real time. The cost covers installation of high-definition cameras and lighting. There also is a monthly fee of up to $150 for cloud-based video storage.

In exchange, participating companies are given Priority 1 status on police dispatches — but some business owners who don’t participate feel they’re being treated like secondary citizens.

“It’s not fair,” said Abdo Nagi, owner of a 76 gas station on Grand River on Detroit’s west side that is not part of the program. “We should all be equal. I pay high taxes already. Now I have to pay extra to get the police to come?

“Don’t get me wrong: If someone has a weapon and we call the police, they get here fast,” Nagi said. “But with other things, it takes a long time. There were kids in here beating up another kid last year, and by the time the cops got here, they were gone.”

Police Chief James Craig insisted officers are not neglecting non-Green Light businesses, adding the delay in responding to the calls from Kaid and Nagi was “concerning.”

“With crimes in progress, we should have responded quickly whether they were Green Light locations or not,” Craig said.

“If you don’t sign up for Green Light, we’re not going to ignore you, but we do expect if you don’t join the program, you should have a relationship with the neighborhood police officers, because it’s their job to work on quality-of-life and crime issues for all businesses, Green Light or not,” Craig said.

City officials, police and business owners have touted the success of Project Green Light since its 2016 launch. The program, which has grown from 87 participating sites on Jan. 1, 2017, to 231 a year later, has contributed to the recent citywide drop in crime, police and city officials said.

Craig said the program is largely responsible for a 41 percent drop in carjackings over the past two years. Police statistics show there was an 11 percent decrease in violent crimes at or near Green Light locations in 2017 over the previous year.

A flashing green light outside the businesses lets people know the area is being monitored at the Detroit Police Real-Time Crime Center, which Craig said is a deterrent to lawbreakers.

“When a criminal sees that green light, it makes them think twice about committing a crime there,” Craig said.

Police said they gave 40,471 special attention runs to Green Light locations in 2017 — an average of 111 per day. That represented about 6 percent of all officer runs, according to Detroit police data.

Priority 1 runs are given precedence over other emergency calls, although Craig said Green Light runs don’t trump violent crimes. But per the agreement with the city, if there are simultaneous calls from two business owners reporting similar crimes, police prioritize calls from the Green Light locations.

The Detroit News reported in June that city officials are considering making Green Light mandatory for all businesses that serve the public and are open after 10 p.m., although Mayor Mike Duggan said last week that likely won’t be implemented until at least 2019.

“It’s not even a front-burner conversation,” Duggan said.“We’re a year away from focusing on it.”

When told some business owners feel they’re being slighted because they already pay taxes and shouldn’t have to pay extra for prompt police response, Duggan said: “I’m not getting that.

“The level of enthusiasm is so high,” he said. “Our resistance comes almost entirely from people who appear to have a relationship with the people up to no good in their parking lots.”

Jesus Hernandez, owner of Abby’s Party Store on Michigan Avenue in southwest Detroit, said his resistance to signing up isn’t that he’s allowing crime to fester around his store — it’s that the price tag is too high.

“It sounds like a great idea, but I just can’t afford it,” said Hernandez, who has owned the store for 20 years. “If the city makes it mandatory, I’ll just have to close at 10. That won’t make a big difference during the week, but on the weekends I’ll lose money.” 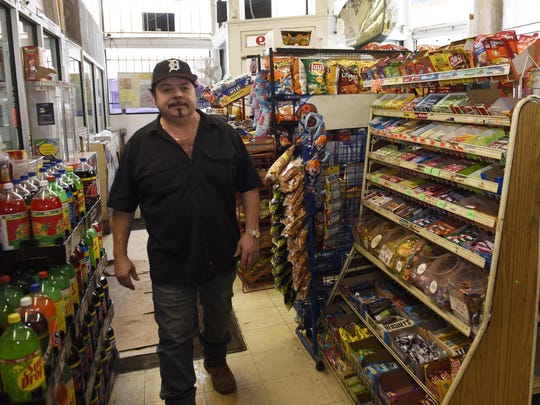 Jesus Hernandez, owner of Abby’s Party Store, said his resistance to signing up for Green Light is because of the high price tag. (Photo: Clarence Tabb Jr. / The Detroit News)

Participating business owners, including Mike Saad, have raved about the program.

“It’s going great,” said Saad, owner of Starters, a bar and grill on Plymouth in northwest Detroit. “Our customers have told us they feel safe when they see the green light, and that’s the most important thing: for our customers to be happy and feel safe.”

Ali Oukalled, owner of a BP gas station in northwest Detroit, said he’s planning to sign up for Green Light.

“My customers have asked, ‘Why don’t you have the Green Light?’ I’ve talked to other business owners who say it’s been great, and their customers tell them they feel safer,” Oukalled said. “So I’m going to get it soon.”

The News reported in October that Detroit police plan to integrate facial recognition software into the Green Light program, although officials insist it will only be used to investigate violent crimes.

“This is about creating safe places in our neighborhoods,” Craig said. “Why does someone get an alarm on their house in a neighborhood where they already have private patrols? It’s an extra layer of protection. That’s what Green Light is.”

Craig said police have been able to solve several crimes because the high-definition cameras allowed them to identify criminals. He also said the “virtual patrols” conducted by officers and civilians monitoring the Real Time Crime Center have led to arrests.

The Rev. Horace Sheffield said crime has disappeared around a “problem gas station,” a Marathon location at the corner of Grand River and Wyoming.

In April, Sheffield’s community group, the Detroit Association of Black Organizations, which is headquartered across the street from the Marathon, offered to help pay for the station to join the Green Light program, after residents complained about open drug-dealing and violence outside the business.

“That’s made a big difference,” Sheffield said. “I can’t think of a single incident since they put in the cameras, and this was an area where there were all kinds of problems.”

The owner of the gas station did not return phone calls seeking comment.

Craig and Duggan said they hope to have 400 businesses signed up for Green Light by the end of the year — but Craig said that will necessitate hiring more people for the Real Time Crime Center.

“There’s no question we’ll need more people to staff that,” he said. “We’re planning for it.”

Nagi said he hears positive things about the program from fellow business owners, but feels he’s being shorted by the city.

“With Green Light, it’s like they’re making us pay extra taxes for something we should be getting anyway,” Nagi said. “Why are those businesses Priority 1? I want to be Priority 1, too.”