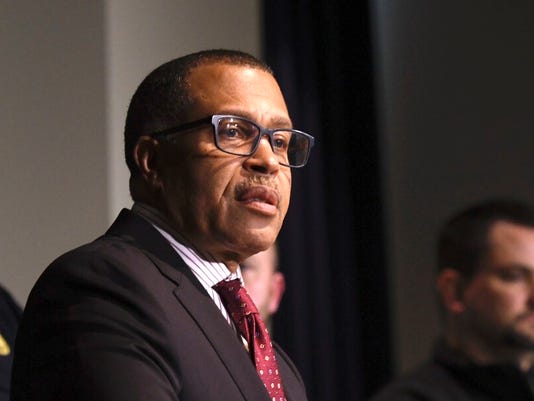 When news first broke about Detroit police Officer Darren Weathers’ death in a car crash Tuesday, his colleagues outside the hospital described the incident as a tragic accident related to a training exercise.

Chief James Craig walked back the claim on Wednesday, saying the 25-year-old officer might not have been part of the training. A witness reported that he ran a red light, while speed and loss of control appeared to be factors in the crash near Clark, Craig said.

As the Detroit Police Department has launched two probes into the accident and training procedures, some question the idea of a police exercise on a busy street.

“What training can merit that type of speed? I don’t understand it,” said Police Commissioner Willie Bell, a 32-year veteran of the department before retiring as a lieutenant in 2003. “I don’t see the necessity.”

Though Weathers had been on the job less than two years, his skill led him to an assignment on the Police Department’s Integrity Unit, part of the Professional Standards Bureau that investigates officers accused of misconduct in office, Craig told reporters Wednesday.

“Part of their duties are to surveil,” Craig said. “This was a training exercise in surveillance.”

Weathers may or may not have been part of that exercise, Craig said, or he could have been trying to catch up with the group.

The chief said the Professional Standards Bureau had not approved surveillance training on Michigan Avenue.

“I don’t condone training in uncontrolled environments,” Craig said. “The work we do is already high-risk. Surveillance is not high-speed.”

New perspective on the crash was derived from a colleague who was behind Weathers, witnessed the crash and called 911, Craig said.

Authorities initially believed Weathers, who was alone in an unmarked police car, hit a metal pylon, but the chief said the officer ran a red light, struck a vehicle turning left, then hit a wall before splitting in two.

“This training exercise should not have happened,” Craig said.

Detroit Police investigators at the scene at Clark Street and Michigan Avenue as a Detroit officer was injured in a collision on Tuesday February 13, 2018 in Detroit. (Photo: Max Ortiz, The Detroit News)

Mark Diaz, president of the Detroit Police Officers Association, said losing an officer in a training-related crash is a first in his 24 years with the department.

“We have a firing range that we visit multiple times per year for training,” Diaz said. “No one’s ever died doing that, despite hundreds of thousands of rounds being fired.”

Craig said two investigations are underway: the department’s Fatal Squad is probing the crash, while an internal probe is reviewing the decision to conduct training in an uncontrolled environment where streets were not blocked off.

“We’re less than 24 hours out” from the incident, he said. “Give us a chance to do a thorough investigation.”

Some clues might not be available. Because of the Integrity Unit’s work, its participants do not drive vehicles with dash cameras or wear body cameras, Craig said.

“We’re coming to terms with it but still trying to answer that underlying question of why,” Diaz said, adding his union would closely monitor the internal affairs investigation into the decision to train on Michigan Avenue.

Diaz said losing an officer to gunfire gives the police community someone to blame — the person who pulled the trigger. But Weathers’ death makes him ask: “How did we miss this?”

“We want to make damn sure nothing like this happens again,” Diaz said.

His death a day after two officers and a Detroit Public Schools Community District police officer were shot by a barricaded gunman and weeks after Officer Glenn Doss’ death after a  shooting during a domestic violence run is a “1-2-3 punch,” Diaz said.

Weathers, also known as “Lucky,” was not on a permanent assignment and might have been seeking a spot in the major crimes unit, Craig said — a request the chief would have approved.