Plan in motion to save Ulysses S. Grant home 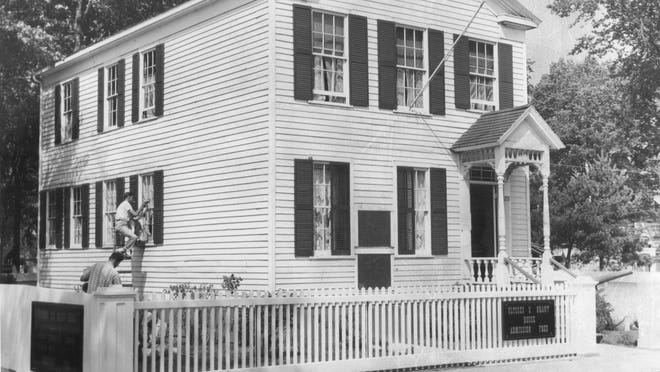 Correction: This story has been updated to reflect that Presidents Ulysses S. Grant, Gerald Ford and George H.W. Bush all lived in Michigan.

In the bedroom of the Detroit house where Civil War hero and U.S. President Ulysses S. Grant lived in the mid-1800s, there’s now a dirty waterbed.

Plywood covers the windows of the two-story white clapboard house at the former Michigan State Fairgrounds near Eight Mile and Woodward. G

rant lived in the house as a young officer prior to the Civil War. The historic home, which was moved to the fairgrounds in 1936, is in disrepair, with holes in the

walls and piles of trash in rooms.

But plans are in the making to move the home of the 18th president of the United States to the Eastern Market area near the Dequindre Cut pedestrian and bicycle path. It would be renovated to become an education center run by Michigan’s Department of Natural Resources, said Sandra Clark, director of the Michigan History Center in Lansing. The remodeled home would have some historical programming and serve as a community space.

And because it would be located in the Eastern Market district, there could be a garden aspect, too. “Grant had a kitchen garden. We’d like to have that,” Clark said.

For years, historical preservationists and others have attempted to find a way to restore and find a new location for Grant’s home. It should become clear by the end of the month whether the new plan will become reality.

“It’s one of the oldest surviving structures in the city of Detroit,” said Dan Austin, author of several books about Detroit history and founder of the website HistoricDetroit.org. Grant is one of three presidents known to have lived in Michigan. The others are Gerald Ford and George H.W. Bush, stationed briefly at Naval Air Station Grosse Ile at the end of World War II.

The idea is to move the home to the city’s Eastern Market area at the Wilkins Street bridge, which is next to the Dequindre Cut. The DNR runs another education center nearby on Detroit’s downtown riverfront.

Officials for Eastern Market Corp. and the state Michigan Historical Commission — which advises the DNR — confirmed the plan but stressed that funding and other approvals have not been finalized.

“I hope we can say something publicly by the end of the month,” said Dan Carmody, president of Eastern Market Corp. “This is a complicated deal with a lot of moving parts.”

Grant, who was born and raised in Ohio, lived in the home with his wife, Julia Dent, from April 1849 to May 1850. It was built either in 1836 or 1837 — historical references differ — and its original location was at 253 E. Fort, near Russell and Rivard streets in the area now known as Lafayette Park. At the time Grant lived there, military barracks were located at Russell and Clinton.

The home was saved from demolition in 1936 when the Michigan Mutual Liability Co. insurance company bought it and presented it as a gift to the fairgrounds. The home was relocated in 1958 within the grounds to its current spot. It was open to the public for years but it eventually was closed and mainly was used as storage facility, Clark said.

“That’s how that waterbed somehow got in there,” she said. Historical items from the house was moved to the historic Fort Wayne when the state fairgrounds closed, she said.

Past efforts to find new life for Grant’s home have not succeeded.

There were talks to move the home to Belle Isle and Historic Fort Wayne, Austin said. Greenfield Village declined an offer to take control of the home several years ago.

In 2015, the state and Eastern Market thought they had a deal to move the house to the Detroit Edison Public School Academy’s campus on St. Aubin, near Gratiot. That’s also near Dequindre Cut and close to the site for the current plan, but that didn’t pan out.

The potential deal comes as the state fairgrounds is about to change ownership hands. Last month, it was announced the city of Detroit would buy roughly 142 acres of state fairgrounds land. The city wants to buy the site for $7 million from Michigan’s Land Bank Fast Track Authority. Detroit City Council, which must approve the deal, is expected to take up the issue soon.

Another 16 acres of state fairground land will be sold to Magic Plus, LLC, a development company with ties to NBA Hall of Famer Magic Johnson.