U.S. Secretary of Education toured the floor of the FIRST Robotics Championship at Cobo Center 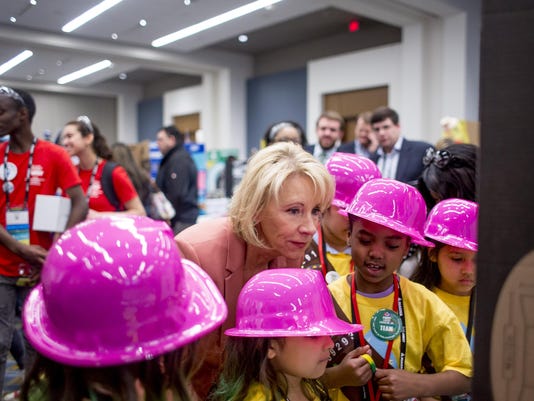 U.S. Secretary of Education Besty DeVos visits a team of Girl Scouts of Southeastern Michigan at the FIRST Championship in Detroit on Friday.(Photo: Anthony Lanzilote / Special to The Detroit News)Buy Photo

Detroit — Robotics student Samantha Parrill was on her feet and ready to talk about her team’s biodegradable paper straw that filters water Friday when U.S. Secretary of Education Betsy DeVos came by for a visit.

“It’s an affordable option for people in other countries who can’t afford clean filtration options,” Parrill, 15, from Louisville, Nebraska told DeVos on the floor of the FIRST Robotics Championship at Cobo Center.

DeVos, a West Michigan native who became President Donald Trump’s education secretary in 2017, came to Detroit to get a close look at the global robotics competition that had drawn more than 15,000 students from around the world to Cobo Center.

DeVos peppered the all-girl team called “Designing Dream Makers” with questions about their side project, asking them what their next steps will be with the invention, which has interested the American Red Cross.

The straw is a side project many robotics teams do as a way to fuel their curiosity in the fields of science, technology, engineering and math. Parrill admitted she did not know who DeVos, a member of President Donald Trump’s cabinet, was, but she enjoyed the spontaneous conversation and the chance to talk about the team’s project.

As loud music thumped overheard, DeVos stood in the pits and watched a live robotics match as a student ambassador explained the game. Behind DeVos, the crowd roared when their team’s robots moved cubes onto the scale.

She also walked the fields speaking to students with Gov. Rick Snyder, who has championed robotics across Michigan as a way to expand the STEM workforce.

DeVos said this was her first global robotics competition experience. She walked over to a group of students in the FIRST Lego League Junior for grades K-4 and asked questions about their project.

“What’s your name? I’m Betsy,” DeVos said to a young student who was part of the Beluga Builders team of Ann Arbor whose focus was on water conservation.

“We know kids are born very creative. We have to just encourage and help them grow their creativity,” DeVos said. “Opportunities like this one are especially great to unleash and unpack a lot of their potential. It’s great to meet these guys.”

Parent and coach Frank Tappen watched as DeVos crouched down to speak to Lego League Junior students and looked closely at a water conservation project. He coaches the Eaglets from Hartland, Michigan.

“I don’t think the kids know who she is, but the adults are getting a big kick out of it,” he said. “The kids are just excited that someone is taking an interest in their project.”

DeVos said watching the students work and talking to them about their robots and projects was inspiring. She hopes to spread robotics programs to more schools across the United States.

“Do I think I could build a robot? I think given enough time and enough help from others who know how to do things, I would be very into it actually,” she said.