Detroit in full control of self for 1st time in decades

Detroit in full control of self for 1st time in decades

Mayor Mike Duggan talks about how he and the city council worked together to free the city from state financial oversight three years after going through bankruptcy. 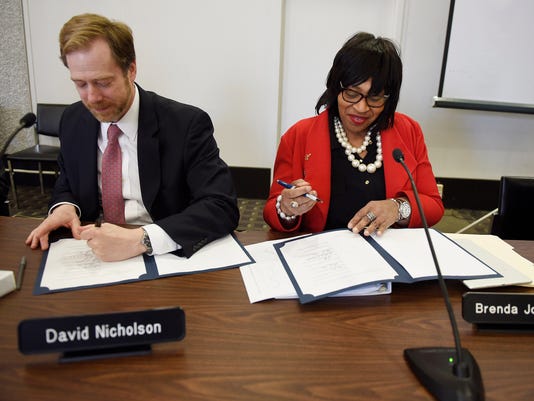 Detroit — The city emerged from state oversight Monday in a historic milestone that ends the last vestige of Detroit’s bankruptcy and marks the first time in four decades that the city has full control of government operations.

The restoration of local control comes as Detroit touts stabilized finances with a projected $36 million surplus in fiscal year 2018, increasing property tax revenues and a plan to have $335 million set aside by 2024 when the city resumes pension payments.

The nine-member financial review commission voted unanimously Monday to release Detroit from the state’s oversight. Since 2014, the commission has had the final say on all city budgets, collective bargaining agreements and contracts larger than $750,000.

“Today is one of the most important days that I’ve had since I’ve been on council,” Council President Brenda Jones said after the commission meeting. “It’s an important day for the history of the city of Detroit.”

Jones, who also sat on the commission, praised Mayor Mike Duggan for not vetoing any city budgets and made a promise to continue delivering quality city services to Detroiters. Under the state’s watch, Detroit posted three consecutive budget surpluses, which was a major threshold to regaining independence.

“This is the earliest we could have done it,” said Duggan, who also sat on the commission. “Today, we have returned self-determination to the people in the city of Detroit.”

Finances in Detroit were the last remaining operation under oversight by state or federal officials. The water and sewerage department was placed under oversight in 1977 for more than three decades over violations of the Clean Water Act.

Other city departments that have been regulated by state and federal entities in the last 40 years include the housing commission, police department, transportation department and assessing department.

While the financial review commission won’t have active oversight, it will still have a “passive monitoring” role, officials say. The city will be required to submit monthly financial reports, along with its adopted budget and four-year financial plan to the commission each year.

The commission will vote on a waiver annually to continue local control in the city. If the city continues to balance its budget and meet fiscal requirements for 10 straight years, the commission will dissolve, officials say.

“This is a day that we all had hoped would come,” Hill said of the exit from state oversight. “Nobody knew that it would come this quickly.”

Hill said the city has been working to address the biggest long-term financial risks of its future, such as its pension contributions and debt service expenses.

The funding plan that helped the city exit bankruptcy in December 2014 relieved Detroit of most payments to its two pension funds through 2023. But in 2024, the city will have to start funding a substantial portion of the pension obligations from its general fund for the General Retirement System and Police and Fire Retirement System.

It’s unclear how much those payments will be, Hill said, but the city’s Retiree Protection Fund should have collected $335 million, plus interest, by 2023. So far, $105 million has gone to the fund.

The city’s four-year financial plan from 2019-22 includes a provision of $170 million for the pension funds.

Detroit is also taking action to reduce recurring debt service expenses. The city has used $30 million from surplus to pay down part of its exit financing debt and $52 million of surplus to redeem outstanding C-notes among other actions.

“Our biggest obstacle to dealing with these issues is time,” said Hill of the pension funding. The city has started planning early so there is “a longer period of time in order for us to put whatever plans in place to deal with those financial issues,” he said.

While elected officials celebrated their independence Monday, some residents said Detroit has not progressed in all areas.

Russ Bellant, who was among residents who filed a lawsuit in 2013 challenging the constitutionality of the bankruptcy, said retirees are in a “crisis” following the restructuring.

“The city can claim success, but it’s still on the backs of people who were victimized by the bankruptcy,” he said.

Bellant, a community activist, said the city continues to focus on the development of downtown.

“That part is good, but that’s masking the neglect to the neighborhoods, the neglect of the retirees and the loss of assets that we will never get back.”

Resident Helen Moore said she was glad the city exited state oversight but still believes there are “two Detroits.”

“We don’t live downtown, we live in the neighborhoods, and we are not getting what we deserve,” Moore said during the commission meeting. “I am hoping that all of you here, when you disburse ... will understand that Detroit is in terrible shape.”

City and state officials have predicted for months that Detroit would emerge from state oversight this spring. Duggan credited his administration and the City Council with getting Detroit’s finances back in order.

The city filed for bankruptcy in the summer of 2013 and officially exited on Dec. 10, 2014, with a plan to shed $7 billion in debt and pump $1.7 billion into restructuring and city service improvements over a decade.

In approving a deal that would be known as the “grand bargain,” which helped pave the way for the city to exit bankruptcy in December 2014, Michigan legislators required that a financial review commission oversee the city’s finances, including budgets, contracts and collective bargaining agreements with municipal employees.

The commission was established as a condition of a financial aid package approved by the state Legislature to defray cuts to Detroit retiree pensions and shield the Detroit Institute of Arts collection from bankruptcy creditors.

“I am confident the city will continue on its path of a balanced budget, strategic investments, improved services and progress in paying down the city’s debt,” Khouri said. “So I am pleased to say this financial emergency is resolved, and I look forward to the city’s continued success.”