Restoration scheduled to be completed at St. Joseph Oratory church by late summer

The bell tower and steeple at St. Joseph Oratory in Detroit. A $2.5 million Historic Renewal campaign launched in October 2017, will help pay to return the structure to its original form.(Photo: Robin Buckson, The Detroit News)Buy Photo

Here's the church and here's the steeple, which is getting some much-needed TLCfrom a dedicated group of people.

The effort to restore the 200-foot steeple and bell tower of the historic St. Joseph Oratory church began Monday. Church officials said the work should be finished by late summer.

The work is part of the three-year, $2.5 million historic renewal campaign the church launched in October 2017.

"Today is a historic day," said Canon Michael Stein, the church's pastor. "The grandeur of the moment must not be lost on us. This is the first construction project on the building of the church since 1892.”

The priest made the remarks during a news conference held in the parish’s social hall across the street from the church.

He was joined by church officials, parishioners and dignitaries from the community.

Located on Jay Street near Detroit's Eastern Market, the Catholic church and its bell tower were built in 1873. At the time, it was the city's tallest building.

“This restoration is historic in many respects,” Stein said. “It provides a real and visible sign of the parish’s lasting commitment to its faithful and the community. Second, it sets a high bar for all future church restoration.” 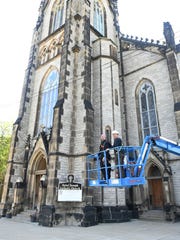 Kurt Hesse, owner of Detroit Cornice & Slate, right, takes Canon Jonathon Fehrenbacher up in a lift to get a closer look at the bell tower and steeple. (Photo: Robin Buckson, The Detroit News)

Stein said the church’s 200-foot steeple is a symbol of the  Catholic faith.

“It is an architectural reflection of us reaching up to the heavens, glorifying God,” he said. “It’s a reflection of our souls ascending to God through the liturgy and the sacraments.”

The church is managed by the Institute of Christ the King, a 28-year-old society of priests, sisters, and oblate brothers within the Roman Catholic Church. The Institute worships through the traditional Latin mass with Gregorian chant.

Parishioner Julie Parthum, 37, of  Redford Township, said the restoration work is  very emotional for her.

A project to restore the steeple and bell tower of the historic St. Joseph Oratory church near Eastern Market in Detroit began May 21, 2018. (Photo: Charles E. Ramirez, The Detroit News)

Parthum said her ancestors sold the property the church sits on to the Archdiocese of Detroit in the 1860s.

She said she hoped this day would come, but there were times when it looked like it wouldn’t happen.

“Until the Institute came, it didn’t look like it was going to happen,” she said. “With a lot of prayers to St. Joseph, anything is possible.”

Also that year, heavy winds severely damaged the steeple and the church. The building was closed for a few months until temporary emergency repairs could be made.

Detroit Cornice & Slate, founded in Detroit in 1888, is performing the restoration work under a $680,000 contract.

The church will remain open during construction and maintain its parish schedule.

A piece of the original decorative copper from the steeple at St. Joseph Oratory in Detroit. (Photo: Robin Buckson, The Detroit News)

Meanwhile, church officials said the parish will continue its campaign to raise money to pay to restore the church's stonework, roofing and electrical systems. Officials said they have already raised about $750,000 towards the entire project.