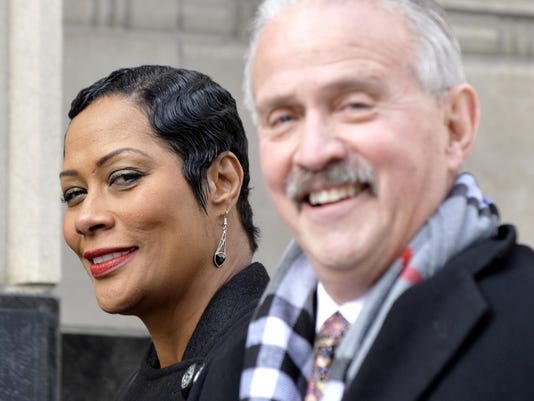 Monica Morgan-Holiefield walks into the federal court building with her attorney, Steve Fishman, before pleading guilty to a tax crime but blamed others for a $1.5 million corruption.(Photo: Todd McInturf / The Detroit News)Buy Photo

Detroit — Monica Morgan-Holiefield, the widow of former United Auto Workers Vice President General Holiefield, should be spared prison time for a tax crime because she has repaid more than $100,000 and is unlikely to offend again, her attorney said Friday.

The request comes two weeks before the 55-year-old Harrison Township resident will be sentenced for filing a false tax return. She pleaded guilty in February in exchange for federal prosecutors dropping a five-year conspiracy charge and other counts stemming from a $1.5 million corruption scandal involving the United Auto Workers and Fiat Chrysler Automobiles NV.

The ongoing federal investigation has led to criminal charges against seven people, caused upheaval at the top ranks of the auto industry and raised questions about the sanctity of labor negotiations.

Morgan-Holiefield should be held responsible for the tax crime, not the sins of her late husband or conduct that was detailed in a conspiracy charge dropped by prosecutors, defense lawyer Steve Fishman wrote in a sentencing memorandum Friday.

"This is an extremely difficult case," Fishman wrote. "On the one hand, Ms. Morgan has committed a serious offense by filing a false tax return. On the other hand, as shown in both the pre-sentence report and the supporting letters received by the court, she has led an exemplary life in this community and has endeared herself to a cross-section of people for a variety of reasons. The wild card, of course, and one which defense counsel fervently hopes this court will ignore, is the drumbeat from the media wishing and hoping for a prison sentence."

The plea marked a stark downfall for Morgan-Holiefield, a celebrated photographer who portrayed a lavish lifestyle on social media and in society columns – a lifestyle prosecutors said was secretly bankrolled by money that was supposed to help train blue-collar UAW workers.

Terms of the plea deal call for Morgan-Holiefield to spend more than two years in federal prison and pay almost $191,000 restitution to the government. She already has paid $102,984, Fishman noted.

She will be sentenced July 13 by U.S. District Judge Paul Borman.

The court could sentence Morgan-Holiefield to time in a halfway house or subject her to electronic monitoring, Fishman noted.

"It could also require her to perform community service, perhaps by teaching photography to aspiring students," Fishman wrote. "These options short of prison would recognize both the seriousness of the offense and Ms. Morgan’s favorable history, characteristics, and community support."

Morgan-Holiefield has an otherwise unblemished record and history of community involvement, Fishman said.

She is suffering from mental health problems and lingering effects of being accidentally shot by her late husband in 2013, her lawyer wrote.

"Ms. Morgan’s physical and mental health are somewhat precarious . . . " Fishman wrote. "She was the victim of an accidental shooting which led to a host of other health issues, including a colostomy. She has suffered from fibromyalgia for over twenty years and has also been diagnosed with sleep apnea."

She retains the support of numerous community members, Fishman said, including public officials, pastors and others.

Morgan-Holiefield was indicted last year in a case that offered a detailed look at how, according to the government, officials at Fiat Chrysler tried to tilt contract negotiations in the automaker’s favor by lavishing labor leaders with first-class airfare, expense accounts and hundreds of thousands of dollars in illegal payments.

Some of the illegal payments to Morgan-Holiefield coincided with 2011 labor negotiations between Fiat Chrysler and the UAW, and were hidden behind an alias and sham companies, including a fake hospice, according to the government.

"In this particular case, Monica Morgan intentionally took funds which were intended to train hard working men and women," Manny Muriel, special agent in charge of the IRS Criminal Investigation division in Detroit, said in a statement after Morgan-Holiefield pleaded guilty.

The dismissed conspiracy charge, and related conduct alleged by the government, should not be considered at sentencing, Fishman wrote.

". . . the government had the opportunity if it so chose to take Ms. Morgan to trial on the far more serious count . . . ," Fishman wrote.