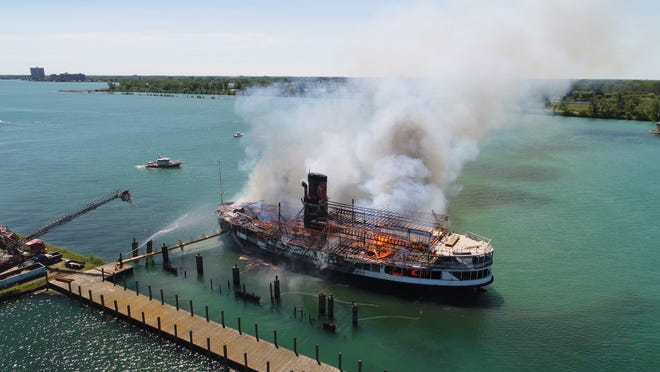 Detroit — Generations of Metro Detroiters recall cruising aboard the Boblo boat SS Ste. Claire, but those cherished memories went up in flames Friday as the historic steamship caught fire while docked along the Detroit River it plied for nearly 90 years.

The boat, which was tied up at Riverside Marina, is feared to be a total loss, but owners Ron Kattoo and Saqib Nakadar vowed to rebuild the iconic vessel if possible.

"It's heartbreaking," Kattoo said as he watched giant water hoses from the Detroit fireboat douse the smoldering, mostly wooden craft.

The men said they were restoring the boat and had plans to turn the ship into a dockside attraction for public tours as well as a Halloween haunted house.

"We know everyone loved it and we're going to do everything we can to bring it back," Nakadar said

A welder working on renovations for the boat may have sparked the fire, officials said.

"Welding is being considered as one of many possible causes. The arson team is still investigating but at this particular point, we know there were welders on the boat before the fire started," Fornell said. "It appears to be accidental, however, the investigation is not over yet."

Mike Nevin, president of the Detroit Fire Fighters Association union, said calls came in around 11:45 a.m. and firefighters got to the boat as soon as they could. Fornell said those dispatched "went on the defensive," because fire made the vessel unsafe to board.

The Detroit Fire Department also dispatched its fireboat on the river to put out the blaze. Firefighters who man the fireboat are also tasked with operating a fire station, and that could have delayed the fireboat's arrival.

Detroit security guard Cliff Jones said he called 911 when he saw the flames. He said it took about 20 minutes for ground forces to arrive and about 45 minutes for the fireboat to get to the scene. Jones said within 10 minutes, the fire had already spread, devastating the 25,000-square-foot vessel.

Emergency responders and onlookers alike lamented the likely loss of a beloved symbol of Detroit's heritage.

Detroit Police Chief James Craig, addressing media members nearby, said he remembers the popular Boblo rides his own family took when he was a kid.

“It’s an iconic piece of history,” Craig said. “A lot of history.”

Kevin and Cindy Duda of Wyandotte were visiting Belle Isle Friday when they heard of the fire and rushed to the scene.

“It’s so sad,” said Cindy Duda, 57. “I remember when both my grandparents were at Wyandotte Hospital, I used to watch the boat go up and down the river admiring it as a little girl. Later, my husband and I rode the St. Claire to go to the Island.”

Lori Feret, a Madison Heights resident who'd worked through the years to save both the Ste. Claire and her sister ship, the SS Columbia, called Friday "a sad day."

"I was like 'Oh my God, it finally happened,'" Feret said.

The SS Ste. Claire and its sister ship, the Columbia, are among the oldest steamships in the country. The ships ferried people to the Boblo Island amusement park on the Detroit River for 89 years until they ceased operation in 1991. Boblo officially closed in 1993.

While the Columbia was saved and moved to Buffalo, New York, to await restoration in 2015, the future of the Ste. Claire had been uncertain for years.

The Ste. Claire had been left tattered, but floating, for years in various spots along the Detroit River. Most recently, the ship was stuck in shallow waters near Riverside Marina after being towed from a spot on the Rouge River in Dearborn roughly two years ago.

Kevin Duda said he was at the marina in November and stopped to take a photo of the St. Claire.

“I was just here to drop off lumber to Brooks Lumber for work and the boat was sitting here looking so nice ... never thought it would be the last sight of her,” he said.

Bill Worden, a maritime historian and the man formerly in charge of historic designations within the city, said fire was the biggest risk for the antique vessel.

"I'm not especially surprised," he said. "A lot of people think of sinking as the biggest risk. Fire is really the big risk. It's been 27 years. The loss of a national historic landmark is never a good thing. She and the Columbia together are the last classic excursion boats in the nation. They're really the last of their type."

Both Worden and Feret said they hope the assumed loss of the Ste. Claire spurs action for the Columbia, which is awaiting transport to New York City to be restored.

"We're all in love with the whole memory of Boblo Island," Feret said. "This is a very sad end for the poor old Ste. Claire."