DeShawn Reed, exonerated after eight and a half years in prison for a crime he didn't commit, bought and reopened a coney island in his community.

DeShawn Reed greets supporters outside D's Coney Island on July 31, 2018 in Detroit after being released 9 years ago for being wrongfully incarcerated. Reed, is reopening a coney island in his community after the former owner was shot and killed in 2016.(Photo: Max Ortiz, The Detroit News)Buy Photo

In fact, it wasn't possible. At the time, he was still serving a prison sentence for a crime he didn't commit.

Now, Reed is preparing to open D's 24 Hour Coney Island in southwest Detroit to give back to the community and honor the restaurant's former owner, who was shot and killed during an attempted robbery at the building on Sept. 1, 2016. The grand opening is set for 5 p.m. Saturday.

Reed said he hopes to show people that anybody can overcome tough circumstances and thrive.

"So the kids, when I see they face and they come up here, talk to me and I see they faces that just make me feel good because they see that they can do it, too," Reed said.

The restaurant at 2626 Schaefer Highway, formerly known as Detroit Coney Island, was owned by Frano Juncaj, an Albanian immigrant from Montenegro whom the locals called Frank, before his death. He, his brother and uncle opened the restaurant in 1980 and ran it for 36 years, his son Nicholas Juncaj said. 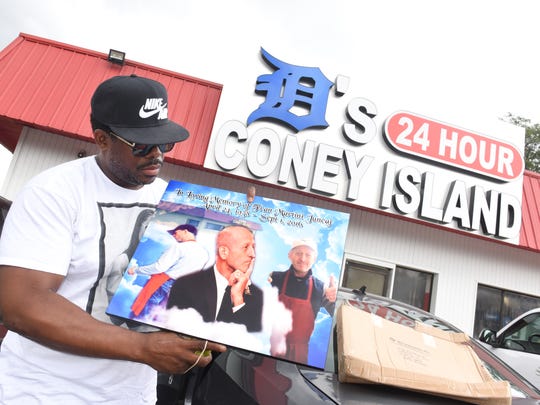 DeShawn Reed holds a photograph of former owner Frank Juncaj outside D's Coney Island in Detroit on July 31, 2018, Reed has purchased the Coney Island after being released 9 years ago for being wrongfully incarcerated. Reed, is reopening a coney island in his community after the former owner Frank Juncaj was shot and killed in 2016. (Photo: Max Ortiz, The Detroit News)

The road leading Reed to become a restaurateur wasn't easy. Even purchasing the building was a difficult task. Reed spoke with the realtor and agreed to buy it, but another nearby coney island owner had made a verbal agreement with Juncaj's family to buy it.

Reed offered the buyer $20,000 to let him purchase the building instead, but he turned him down. When that didn't work, Reed approached Juncaj's son. The two "had a heart-to-heart" and the family decided to sell it to him. Reed added the $20,000 that the other buyer refused onto the original asking price.

"I hope that he’s successful and I hope that it stays there for another 36 years," Nicholas Juncaj said.

Reed said he plans to work just as hard as Juncaj did to make sure the restaurant is a success.

"I will be here all the time, every day. Because that’s what I picked up from Frank and them," Reed said.

"I just want to be here to greet everybody and just make sure everybody is comfortable and everybody getting the best service ever."

When Juncaj was killed and the coney island shut down, fewer people came through the area, which meant fewer customers for local business owners, according to Justin Drew, owner of D & J Tires and Towing across the street from the coney island. He's glad to see the restaurant opening again.

"It’ll bring a lot more people back here, help other businesses out," Drew said. "Somebody will stop in, want to get their car fixed, they’ll go get something to eat while they wait. They got somewhere to be comfortable at."

Zaid Misho, store manager at the MetroPCS nearby, said the coney island's reopening should bring the community closer.

"It used to be a nice spot for people to come together," Misho said. "We need it out there, that’s for sure."

After making the purchase, Reed said his first priorities were to make the building beautiful, colorful and safe. Having repainted the outside red, white and blue and the inside the same with splashes of yellow, he has managed to accomplish the first two.

In light of Juncaj's tragic death, Reed is stepping up security at the coney island.

He had a privacy fence put up around the drive-thru to create a barrier between it and a nearby alley. The restaurant will also be a part of Project Green Light, the partnership program between the Detroit Police Department and local businesses signified by a blinking green light on the building. That program includes real-time security cameras linked to the police headquarters, but Reed will also be adding his own security cameras and more lighting outside.

"I’ve been born and raised around this neighborhood so when anybody get hurt — shot, killed or whatever the case may be — it hurt me, period," Reed said. "I don’t care who it is. We’re just trying to put a stop to all of it, you know, do what we can."

On March 12, 2000, a shooting in Reed's neighborhood changed his entire life. He and his uncle, Marvin Reed, were accused of attempting to murder a man who was shot in the neck and left quadriplegic while driving through Ecorse. 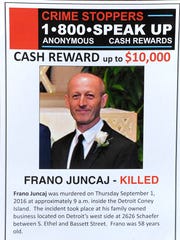 The victim told police that Reed had committed the crime. It was enough to put Reed behind bars.

Reed was found guilty by a judge and sentenced on August 27, 2001, to 20 years in prison for attempted murder and a felony firearm charge, based primarily on the victim's testimony. He said things were "looking shady" until the University of Michigan's Innocence Clinic took on the case in 2009 and helped free the Reeds.

David Moran, co-founder and director of the Michigan Innocence Clinic, said Reed and his uncle were the first two individuals exonerated by the clinic.

Since its inception in 2009, the clinic has exonerated 18 people who are all doing well now after being proven innocent.

"I knew since he got out that he was real interested in business and particularly real estate and now the restaurant business," Moran said. "So I’m not surprised at all, but it’s very gratifying to see our clients get on with their lives and try and make up for lost time."

At the Michigan Innocence Clinic, students work on all of the cases, from investigation to the court room. In the Reeds' case, Moran said students called for witnesses in court that proved the men were innocent and a student made the closing argument to the judge who eventually granted a new trial.

The clinic is also a non-DNA innocence project, meaning they look for other types of evidence.

"For example, in the Reeds' case, we were relying on new testimony from multiple witnesses who established that it wasn’t the Reeds and in fact identified who the real shooter of the victim was," Moran said.

The victim also recanted his testimony, admitting that he never saw who shot him.

Reed spent a total of eight and a half years in prison before the charges against him were dismissed. He was released on July 31, 2009. Reed and his uncle filed a lawsuit against the City of Ecorse and four police officers involved in their case and received a settlement of around $1.57 million each before legal fees. 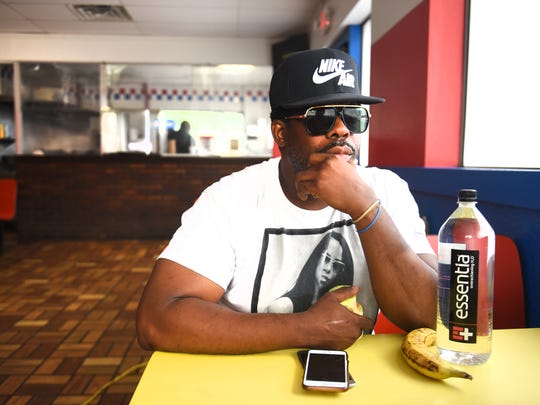 DeShawn Reed inside D's Coney Island on July 31, 2018 in Detroit after being released 9 years ago for being wrongfully incarcerated. Reed, is reopening a coney island in his community after the former owner was shot and killed in 2016. (Photo: Max Ortiz, The Detroit News)

"I’m living comfortable now. I don’t have to look over my shoulders no more," Reed said. "I can just be a family man, a businessman and be affecting my community and that’s just what it is."

Reed has invested in houses and apartment buildings in southwest Detroit, but now he is set to open his first restaurant on the same week as the ninth anniversary of his release from prison.

The grand opening for D's 24 Hour Coney Island will feature  bounce houses, face painting and snacks for kids. There will also be a stage where local radio hosts and a live band will perform. The event will honor former owner Juncaj with a balloon release, memorial t-shirts and words from his family members.

Nicholas Juncaj said he hopes selling the coney island to someone in the community might encourage any witnesses to come forward with information in his dad's case. He said he doesn't blame the neighborhood for what happened to his father.

"I had a lot of people tell me 'Hey, please don’t judge the community differently because it wasn’t the community that did it. We loved him just as much as you, it was just one person.' And they’re right," Nicholas Juncaj said.

Frano Juncaj will always have a place at the coney island. Reed had a memorial collage made, featuring photos of him and the building when he owned it, to hang on the wall inside.

Reed envisions his coney island as a safe haven and place of fellowship in the area. He wants families to come from all over southwest Detroit, dine in and meet each other. He hopes it will contribute to ending violence and crimes among young people.

"If we bring our kids in here and we eat together and we introduce our kids, we could put a stop to that," Reed said.