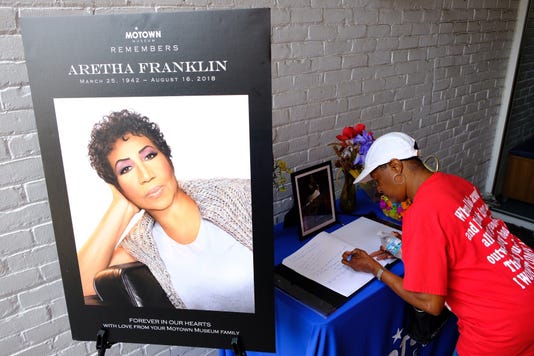 Donna Elsberry, 65, signs a book to be given to Franklin's family.(Photo: Sarah Rahal, The Detroit News)Buy Photo

Detroit — Fans gathered at the Motown Museum on Saturday to pay their respects to the late Queen of Soul Aretha Franklin.

Her voice could be heard down the street as visitors danced to her tunes outside the museum along West Grand Boulevard.

The museum will play Franklin's hits Saturday and Sunday to pay tribute to Franklin and her contributions to music, said manager Shawntel Nelson. While she was never signed to the Motown label, the museum considers her a part of the extended family.

"We've been getting many inquiries, people keep calling, but I don't think they realize Aretha shot down Berry Gordy to explore her gospel sound," Nelson said. "But she was good friends with many of the original Motown singers and we consider her part of the extended family."

After some years performing and recording gospel music with her father in the ’50s, Franklin was signed to Columbia Records in 1960, considered the crown jewel of classy American pop and jazz. It was at Atlantic Records, where she signed in 1966, that she changed the course of popular music with her gospel-infused recordings that included “I Never Loved a Man (The Way I Loved You),” “Respect” and “Chain of Fools.”

Nelson said the administrative staff put together a memorial to give her fans the opportunity to express their condolences. Outside, there is a guestbook available through Sunday for visitors to sign that will be given to Franklin's family. 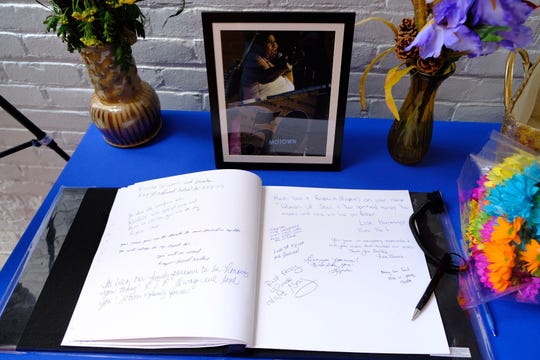 The Motown Museum had a guest book available for visitors to sign and share their condolences to Aretha Franklin's family. (Photo: Sarah Rahal, The Detroit News)

"He saw her, got off stage and gave Ree-Ree a hug and said she was his first love and the crowd gave her a standing ovation," said Elsberry, from Detroit. "My son Jared and I are here to pay our respects to her. She's been number one in our community ever since 'Respect' hit the radio."

Many gathering at the Motown Museum to pay respects to Aretha, who administrators say “wasn’t a Motown artist, but was a part of the Motown extended family.” pic.twitter.com/U4S9Cy4i7r

Nelson said while the museum's tours are sold out every weekend, Saturday they were particularly busy with visitors.

"Right now, all we have of Aretha is this video clip of her signing with the Four Tops playing on a loop and her songs playing outside," she said.

Ingrid White traveled from Toronto with family and friends to sign the guestbook and visit the Charles H. Wright Museum of African American History, where Franklin will lie in repose 9 a.m. to 9 p.m. Aug. 28 and Aug. 29.