'This has created a very big hole in firefighter family,' colleague says after body of Jack Wiley Jr. found in home on 15000 block of Penrod 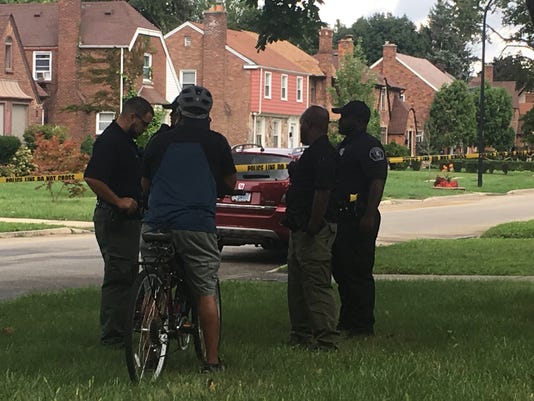 Jack Wiley Jr.'s friends and co-workers say he was a good-natured public servant who had many reasons to live.

The second-generation Detroit firefighter was set to turn 30 in 10 days. He had recently been reassigned to the Detroit Fire Department's Engine 57 on Burt Road, and was in the process of fixing up a brick home he'd moved into a few months ago.

On Tuesday, Wiley's sister reportedly found his bloodied body inside his home in the 15000 block of Penrod on Detroit's west side. He had been shot.

The grisly discovery was made about 9:15 a.m., Detroit Police Chief James Craig said.

"It's still a fresh case and information is sketchy at this point, but this was definitely a murder," Craig said. "The sister came to her brother's house and saw a lot of blood. Right now, it's difficult to say much more because this is all preliminary information. The investigation is still new."

Wiley's car had been stolen, but it was recovered a few hours after police were called to the scene, Detroit Police Sgt. Nicole Kirkwood said.

Because the case involves a crime, Detroit fire officials referred questions to the Police Department.

The victim, who joined the Fire Department in November 2014, followed in the footsteps of his father, a retired Detroit Fire Department senior chief of the same name, acquaintances and co-workers said. He was described as a dedicated firefighter who was proud of his family's legacy of public service.

"Jack was a tall, friendly, outgoing young man," said neighbor Martin Rucker, who is also a Detroit firefighter. "This has created a very big hole in the firefighter family."

When asked if he'd ever noticed problems at Wiley's home, Rucker, a 19-year fire department veteran who lives down the block, said: "He hasn't been there long enough for there to be any trouble. Jack just moved here on the block a short time ago, and was fixing up his house."

Rucker said he believed Wiley lived alone. "The only time I recall seeing anybody there was people helping him with the renovation," he said.

"He had four years in the department, but had only been on the street for a few months," Rucker said.

Mike Nevin, president of the Detroit Fire Fighters Association Union, said he was furious about the killing.

"Members of the Fire Department are pissed off, to be honest," Nevin said. "This is the second firefighter we've had murdered in three years."

Nevin was referring to the December 2015 slaying of David Madrigal, who was bludgeoned with a gym weight after he was set up for a robbery by three acquaintances. Timmy Soto, Christian Rasnick and Nicole Oneill were convicted in Madrigal's death.

"It doesn't matter that he was a firefighter; this is yet another Detroit murder statistic," Nevin said. "(Wiley) was a guy nobody had a bad word to say about. This is not right — no matter what he did for a living. We need more police and firefighters in Detroit. The city is growing, and we need more bodies on the street."

Residents of the block, which mostly consists of brick homes with manicured lawns, said violence is unusual in the area.

“It’s very unsettling because this is a great neighborhood,“ said Jim Westphal, who lives down the street from the crime scene. “This neighborhood has really come back since the recession. There are fair number of firefighters and police officers who live around here.“

Nevin said the killing was particularly tragic because it came 10 days before the victim's 30th birthday.

Rucker, who struggled to hold back tears, said he and his fellow firefighters will try to heal in the wake of the killing.

"Jack, just know that we love you, and we'll surround you with our love, and come out to support you," Rucker said. "It's hard, but we'll pull together as a department."