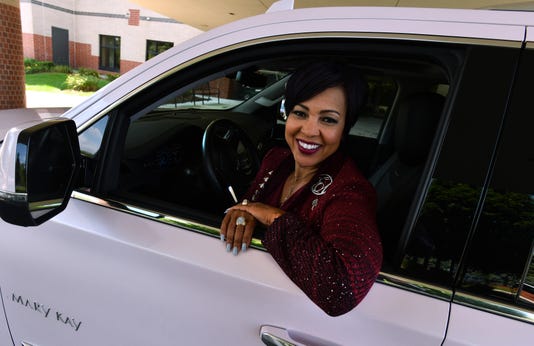 In her hit song “Freeway of Love,” Aretha Franklin joyously sang about  cruising in a pink Cadillac.

To honor the Queen of Soul at her Aug. 31 funeral, pink Cadillac owners have been called to line their rosy vehicles along Seven Mile near Greater Grace Temple in Detroit. More than 100 pink Caddies are expected to file in outside the church at 8:30 a.m., and owners will be permitted to attend the private funeral, the church’s first lady Crisette Ellis said.

Ellis said it was her husband and the church’s pastor, Bishop Charles H. Ellis III, who sparked the idea to have pink Cadillacs at Franklin’s service. Their church has hosted many high-profile funerals, including those of fallen police officers. (The service for Wayne County Sheriff Sgt. Lee Smith is set for Thursday.) Police officers and mounted forces from various law enforcement agencies typically line their vehicles along Seven Mile in front of and near the church.

More: 3rd viewing of Aretha Franklin will be at New Bethel Baptist Church

Ellis, who drives a pink Cadillac Escalade, said she “got on the bull horn” to spread the word and create an online form for  pink Caddy owners to sign up. She said the response has exceeded her expectations.

“It kind of took on a life of its own,” said Ellis, a national sales director for Mary Kay. “I put the clarion call out and before I knew it, there were people from Dallas, Omaha (Nebraska), Chicago, you name it ... some people are driving 15 hours, 18 hours.  Everybody is just so excited that they could be a part of Aretha Franklin’s homegoing.”

Besides Franklin, the woman most commonly associated with pink Cadillacs is the late Mary Kay Ash, founder of the multilevel marketing company Mary Kay. Ash was famous for awarding top employees with pink Cadillacs (and other vehicles). Mary Kay, which was founded in 1963, states on its website that today there are more than 4,500 “career cars” on the road, and more than 1,000 of those are the iconic pearlized pink Cadillac.

The majority of the vehicle owners who are participating own the new model pink Mary Kay cars, but Ellis is open to including pink classic Cadillacs that have no affiliation to the cosmetics company. She said she’ll keep the registration open for the time being. Interested car owners can visit http://bit.ly/freewayoflove.

“It almost doesn’t get any bigger than Ms. Franklin,” Ellis said. “Her genre of music has transcended time and people have been inspired all over the world because of her, but I also think it’s so fitting because she was a part of the civil rights movement. ... She was a such a charitable woman giving anonymously. She had such a big heart.”

Franklin’s 1985 song “Freeway of Love” — which featured record producer Randy Jackson (of “American Idol” fame) on synth bass and Clarence Clemons from the E Street Band on saxophone — hit No. 1 on the Dance Club and Hot R&B/Hip-Hop charts and No. 3 on the Hot 100.

Franklin’s fun and funky video for “Freeway of Love” is an homage to Detroit, filled with shots of the city’s skyline, the Uniroyal Tire, the Motown Museum, local interstate  signs and car factory images. The black-and-white video ends by turning to color as Franklin, wearing white fur and winking at the camera, drives off in the passenger seat of a pink classic Cadillac convertible with a blue Michigan license plate reading “RESPECT.”