Brian Kischnick, 50, was charged with bribery of federal funds, which carries a sentence of 10 years in federal prison and a $250,000 fine 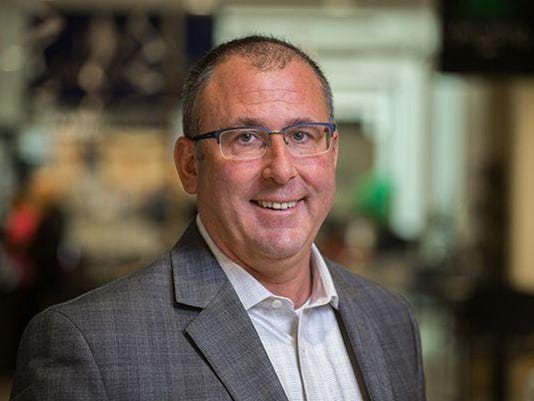 Kischnick, 50, was charged with bribery involving federal funds, which carries a sentence of 10 years in federal prison and a $250,000 fine. He pleaded guilty to soliciting $15,000 and receiving $5,879. Of that amount, Kischnick received $3,000 cash, free meals and alcohol from DiLisio Contracting of Clinton Township, his lawyer said.

The former city official was accused of pocketing more than $20,000 from the city contractor and charged in a criminal information. Bond was set at $10,000 and is restricted from leaving the country.

Prosecutor Dawn Ison said in three years as city manager, Kischnick accepted a free apartment, utilities and furniture rental, totaling more than $42,000, in exchange for influencing the City Council in contracts to improve roads outside an apartment complex in Troy ahead of schedule. Kischnick also accepted a free driveway removal worth $3,500 from DiLisioin return for using the contractor for developments, she said.

Ison said the contractor is not being charged.

Kischnick's defense lawyer Anjali Prasad said the incident was a set-up by the contractor and Kischnick is only at fault for accepting $3,000.

"This is all over $3,000 a snitch put in his hand while he was wearing a wire," said Prasad. "I'm speculating, but the contractor got in trouble and feds said 'what can you do for us?' and they said 'we'll give you Kischnick.' This was never about Brian Kischnick, but about something much bigger."

On Thursday, DiLiso Contracting Inc. officials issued a statement in response to Kiscnick's plea. The company said it has provided concrete services to the city of Troy for 10 years long before Kischnick was its city manager and that all of its contracts with the city were publicly bid.

It also said the former city manager attempted to extort money from the company.

"DiLisio Contracting has never participated in any 'pay-to-play' scheme or bribery to receive contracts in the City of Troy or elsewhere," it said. "As a victim, DiLisio Contracting worked closely with, and followed the direction of, the Federal Bureau of Investigation and the Department of Justice throughout their investigation."

The bribery charge against Kischnick came months after he was fired from his $161,000-a-year job following a checkered stint that included allegations of domestic violence and questionable expenses. The expenses included thousands of dollars spent on personal meals, pricey cellphone accessories that he passed out as gifts to workers, and passes he arranged that permitted selected nonresidents and their families to use city recreational facilities.

Troy hired Kischnick in 2012 after he served as Tittabawassee Township manager. His contract as Troy’s city manager had been extended a year ago. He was accused of accepting more than $20,800 in cash and items from a representative of an unidentified contractor between 2015 and March, when he was fired.

"In December 2017, I did accept $1,000 in meals at Fogo de Chao, $2,000 from contractors out of Troy's roadwork, $2,379 from the contractor in meals and alcohol," Kischnick said to Judge Nancy Edmunds. "I was the city manager and did make recommendations to city council. The contractor did provide the driveway, which I didn't pay for, but I should have."

Prasad said Kischnick was not the only city official at the Christmas meal at Fogo de Chao and he's being unfairly treated.

"Kischnick came to lawyers before he even hired me and told them what he did was wrong and now they are trying to pin unrelated things from years ago against him," said Prasad. "I can tell you he wasn't the only official at the meal -- elected and nonelected officials indulged, too."

The guilty plea comes three months after, Kischnick was sentenced in a separate case to 15 months reporting probation, a 40-week domestic violence program and substance abuse monitoring for tackling his 28-year-old girlfriend and driving her face into the ground outside her Clawson address during a March 9 argument.

Kischnick will return to court for sentencing at 10 a.m. on Dec. 13. The government is seeking a prison sentence of 46-57 months, while Kischnick's attorney is requesting a term of 27-33 months.

Officials say the city has completed an audit of security systems and access to critical accounts. No evidence of any unknown data breaches was discovered.

Current TroyCity Manager Mark Miller said city officials will move forward with plans for a forensic audit of finances and other measures to ensure professional and ethical employee behavior.

“Mr. Kischnick victimized Troy residents and employees with his criminal behavior,” Miller said in a statement Thursday. “We are taking action to ensure that the City of Troy is free from corrupt and unethical behavior now and in the future.”

"The City is cooperating with the ongoing FBI investigation into this matter, including a dinner at a local restaurant that was allegedly attended by other employees and elected officials," Miller said. "If any additional wrongdoing is revealed by this investigation, City leadership will take action."