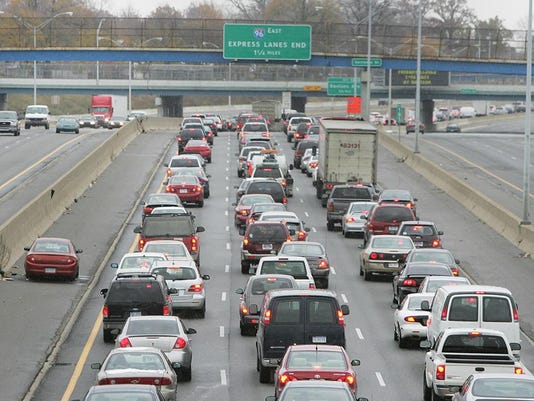 The proposal is the latest attempt to change no-fault auto insurance rules in Michigan, which is the only state in the country that requires unlimited lifetime medical coverage for all drivers. Michigan is routinely among the nation's most expensive states for auto insurance rates.(Photo: Robin Buckson / The Detroit News)Buy Photo

Detroit — Mayor Mike Duggan and a group of Metro Detroit residents have filed a federal lawsuit over Michigan's no-fault auto insurance law, asking the court to give the state six months to come up with a fix for the act they contend is "unconstitutional."

The lawsuit, filed Thursday in U.S. District Court on behalf of Duggan and eight residents who have faced financial hardships over auto insurance premiums, alleges that the state's mandatory no-fault auto insurance system has led to "excessive" rates and “violates the constitutional rights of Michigan’s citizens."

“The No-Fault Act has failed Michigan residents at every turn,” the suit contends, noting the plaintiffs are seeking a declaration that the law is unconstitutional. “The State should be given 6 months to repair the automobile insurance scheme. If that deadline is not met, the No-Fault Act should be deemed null and void and the tort system, used by a significant majority of states, should be reinstated.”

After Michigan lawmakers passed the No-Fault Act in 1972, the Michigan Supreme Court ruled that because the state chose to make no-fault insurance compulsory for all motorists, it must ensure that the coverage is available at "fair and equitable" rates, the suit notes. If it becomes excessive, unfair or inequitable — which the plaintiffs contend has happened — the law becomes unconstitutional, the lawsuit argues.

"It is beyond dispute that Michigan’s insurance rates have become unconstitutionally excessive, unfair, and inequitable," the lawsuit reads. "Michigan residents universally pay more for auto insurance than do residents of any other state."

The suit names Patrick McPharlin, the director of Michigan’s Department of Insurance and Financial Services, as the defendant. The department he oversees is responsible for regulating and enforcing the state’s no-fault insurance system.

Andrea Miller, a spokeswoman for the department, said in an email Thursday that officials needed time to review the complaint and could not comment.

Duggan joined the other plaintiffs “to protect the rights of all Detroit residents who are being charged excessive, unfair and inequitable premiums," the lawsuit says.

“This law is causing thousands of people across Michigan to break the law by driving without insurance because they simply can no longer afford it,” Duggan said. “Because the Legislature has not shown the leadership to address the issue, we are asking the court to provide residents the relief they need from these unjustifiably high insurance rates.”

The federal filing says the state’s average auto insurance premium of $3,059 is more than double the average premium in neighboring states, according to the online database ValuePenguin.

The suit cites United Way data from 2016 that found 15 percent of Michigan households live below the federal poverty level and another 25 percent live above it but still struggle to afford basic needs like childcare, food and transportation.

With the highest auto rates of any city in the nation, Detroit drivers pay an average of $6,197 for auto insurance coverage, the suit says, noting the rate is four times the national average.

The excessive insurance premiums have a "catastrophic impact for many Detroit residents,” the lawsuit contends, nearly 40 percent of which are living in poverty.

Auto insurance is unaffordable in every Detroit zip code, based on Federal Insurance Office standards, the complaint says.

Michigan lawmakers have spent years debating various reforms to the state’s no-fault auto insurance law, which is the only one of its kind in the country that requires unlimited lifetime medical benefits for catastrophic injuries.

Most Republicans and Democrats agree the status quo is not working, citing car insurance rates that routinely rank among the highest in the nation, but they have failed to agree on a solution amidst intense fights involving powerful insurance, trial lawyer and hospital lobbies.

The plan failed amid opposition from some Republicans and most Democrats, who defended guaranteed benefits in current law and questioned provisions they said could allow insurers to skirt cost-cutting requirements.

Some Detroit lawmakers complained the legislation did not prohibit “red lining” by insurers who are allowed to charge higher rates based on zip codes and other non-driving factors. Duggan vowed to continue fighting for reform despite the failed vote and told reporters he was proud of the four Detroit Democrats who supported the plan, saying they “stood up to enormous pressure from special interests.”

Detroit's Chief Operating Officer Dave Massaron said the Thursday lawsuit will run parallel to the mayor's efforts in the Legislature.

"We still believe the Legislature needs to act and with this lawsuit, the remedy asked for is for the court to order the Legislature to act," he said. "It's the exact same purpose, just different means."

Gideon D'Assandro, a spokesman for Leonard, said Thursday that "lowering rates is still a top priority" for the House speaker but he needs to review the suit before weighing in on it.

State Rep. Sherry Gay-Dagnogo, who chairs the Detroit Caucus, noted Thursday a bipartisan plan to lower rates has sat untouched by House Republican leadership for the past 10 months.

"If the mayor is serious about the need for action, he will join me and members of the Detroit Caucus in calling on his Republican allies to hold a hearing on the Fair and Affordable No-Fault Reform package," she said.

Thursday's lawsuit says the No-Fault Act has not achieved the statewide cost savings that supporters promised in the 1970s. Instead, the costs of litigation and premiums have become "out of control."

Detroit resident Gladys “Peggy” Noble is among the plaintiffs. The 76-year-old retired social worker is driving a 16-year-old vehicle but pays $210 per month for basic coverage — nearly 20 percent of her monthly income, she said.

Noble, who lives on a modest pension and Social Security check that provides her with less than $2,000 per month, says at times she's had to forgo driving because she couldn't afford to pay her auto insurance and basic needs like food, clothing or medication.

"I have been driving over 60 years. I have a squeaky clean driver's record. I have never had a car accident," said Noble, who is covered by Progressive insurance and drives a 2002 Chevrolet Impala. She has no-fault insurance without collision coverage.

"I may eventually have to drop this insurance so I can keep food on my table. There's no one here but me. Sometimes I have to go to a food pantry to get some food. That, to me, is embarrassing and it's not fair," she said. "They need to take a look at this. More and more folks need to stand up."

A second plaintiff, Haley Roell, is a University of Michigan student who is paying $1,400 annually for coverage on her 2007 Chevy Cobalt.

The 20-year-old has a discounted rate through her temporary employment with the university. She's unsure she'll be able to cover the cost, which last year was quoted between $300 and $400 per month, once the employment ends, she said.

"I'm definitely nervous that I'm not going to be able to afford the insurance because it's an insane amount of money per month just to insure the car," she said, saying it'll be a factor in deciding where to take a job after she finishes college. "For young people who are trying to move forward with their career, it's a huge burden."

Others represented in the suit include:

♦Carrol Lockett, a 69-year-old church volunteer from Oak Park who pays an insurance premium of $329 per month, despite a clean driving record and no auto accidents in over 20 years. The payment, the suit contends, is nearly 15 percent of her monthly income.

♦Joseph Vaughn, 53, of Detroit, a business owner, is uninsured because he cannot afford insurance and was recently quoted $4,000 for six months of coverage.

♦Eastpointe resident Stephanie Huby, 49, pays $250 per month for  insurance -- a cost higher than the monthly lease payment for her vehicle. She's been forced to let her insurance coverage lapse because she could not afford the monthly payments.

♦Jacintha Pittman of New Haven, a 39-year-old mother of three, is driving a 2008 Saturn Vue and pays $325 per month for her insurance. She says she's never been ticketed or involved in an accident.

♦Clayton Wortmann of Detroit is a 25-year-old respite care provider who drives a 2015 Chevy Cruze. He's paying $280 per month for insurance.

The suit says that No-Fault is "constitutionally unaffordable," because it mandates unlimited personal injury protection benefits, has no fee schedule for auto accident related medical services and allows medical providers to charge exorbitant fees for medical procedures, among other things.

A coalition of consumer advocacy groups and health care professionals who have opposed Duggan's legislative effort called the lawsuit a "political stunt." The group contends it would adversely affect citizens across the state and allow insurance companies to sell lower-quality plans with no guarantee of a reduction in rates.

“Instead of holding insurance companies accountable for their discriminatory rate-setting practices and sky-high premiums, Mayor Duggan is once again blaming a law that has been a lifesaver for thousands of Michigan families over the last five decades," John Cornack, president of the Coalition Protecting Auto No-Fault, said in a statement.

Pete Kuhnmuench, executive director of the Insurance Alliance of Michigan, said the group agrees with Duggan that the Legislature should "enact real reforms to fix the broken, outdated auto no-fault system to bring much-needed relief to Michigan drivers.”

The No-Fault Act took effect in October 1973, with Michigan being among 19 states to adopt the policy by 1976. It set out to provide victims of auto accidents with faster and more adequate compensation than what was offered under the prior, common law tort system.

No-Fault abandoned the common law fault determination, eliminating the right to sue the responsible party in most vehicle accidents. But it allowed accident victims to seek compensation through their own insurance companies.

After Michigan adopted the No-Fault Act, the state Supreme Court ruled that because the state chose to make no-fault insurance compulsory for all motorists, the state must ensure that coverage is available at fair and equitable rates.

The high court ruled in 1978 that Michigan motorists are constitutionally entitled to have no-fault insurance made available on a "fair and equitable basis."

While the act was generally constitutional, the court found it was rendered unconstitutional by its failure to ensure that rates would be fair and equitable.

Despite that, the court did not strike down the law. Instead, the state legislature and governor were given 18 months to correct the constitutional deficiencies. In response, they passed the Essential Insurance Act of 1979.

The court, however, never evaluated whether the statutory changes corrected the constitutional deficiencies of the No-Fault Act, because, at the time, there was no further challenge to the law.

Bloomfield Hills-based attorney David Fink, who filed the suit on behalf of the plaintiffs, said Thursday's action is the "most significant" effort since that time to directly address affordability.

"This is the first (lawsuit) to accept the invitation of the Supreme Court to come back if insurance rates are not affordable," Fink said. "We're excited to finally be getting this constitutional issue back in court."