Funeral to be held Wednesday for Jack Wiley II, who was found murdered in his house last week. 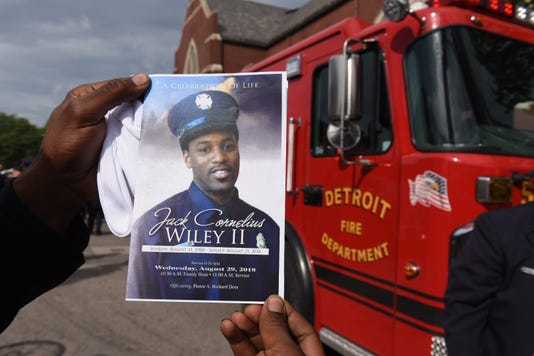 Visitation services will be held 4-8 p.m. Tuesday today for a Detroit firefighter who was found slain in his home last week, city officials said.

The services for Jack Wiley II will be held at the Clora Funeral Home, 18957 W. Warren Avenue in Detroit, Fire Chief Robert Distelrathsaid in a statement.

“The Department wishes to express its sincere condolences to the family of Jack Wiley II," Eric Jones, Executive Fire Commissioner, said in a statement. "We wanted the public to have an opportunity to participate in the services and support the family of (Wiley), who was an outstanding man, fire fighter and public servant.”

Wiley was found slain Tuesday in his home on the 15000 block of Penrod on the city's west side by his sister, according to police. His vehicle had been stolen.

Two 18-year-old men have been charged for Wiley's murder and robbing his home, officials said.

Authorities allege that Carter and Walker went to Wiley's home to rob him, and shot and killed him during that robbery.

The suspects allegedly took items from his home and set fire to what they stole, in what authorities believe was an attempt to conceal the theft.