Supporters fight for a cure while raising funds to support victims

Detroit — Aretha Franklin's 'I Say A Little Prayer' could be heard throughout the streets of New Center on Saturday as marchers in green and purple walked in support of Lupus victims and their families.

About 750 people gathered in New Center Park for Detroit Lupus sixth annual Walk for Warriors, a fundraiser supporting Lupus victims and their families. 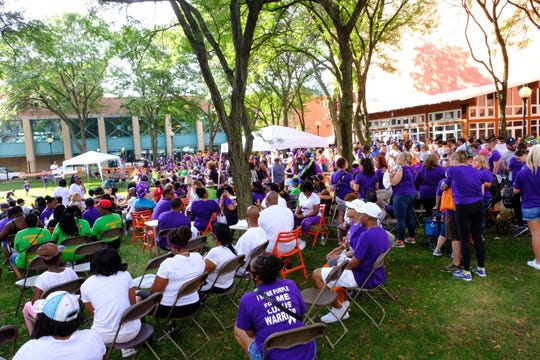 Organizer Sharon L. Harris, from Detroit, started the organization in 2012 and raised $34,000 on Saturday, but hopes to continue fundraising online.

"We raise money for emergency financial grants and scholarships and through those, we're able to help struggling families," said Harris, 39. "Lupus Detroit has a great community of people who are active and supportive of others with lupus."

Harris was diagnosed in 2002, a month after graduating from a Florida university. Her mother noticed her nose, eyebrows and ears had turned the same color as the inside of her hands and she consulted with a dermatologist, who confirmed the diagnosis.

"I've had two strokes in a year, my knuckles were so swollen I couldn't put rings on, I couldn't walk for six months," Harris said. "I've always had support, but after hearing about others who didn't, I started Lupus Detroit to generate a community to help."

Lupus Detroit doesn't have a paid staff or a building, but they have raised more than $125,000 at past walks, helping many families in the Metro Detroit area, Harris says.

Lupus is an inflammatory disease caused when the immune system attacks its own tissues. It can affect skin, joints, kidneys, blood cells, brain, heart and lungs.

Symptoms include fatigue, joint pain, rash, and fever, which periodically get worse or flare-up and then improve. 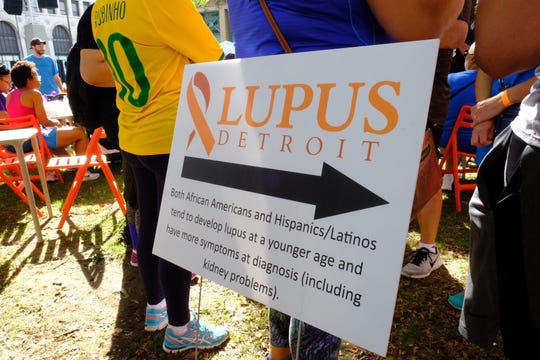 Both African-Americans and Hispanics tend to develop lupus at a younger age, research shows. (Photo: Sarah Rahal, The Detroit News)

There is no cure for lupus; however, treatments can help and patients like Christen Rouseall focus on minimizing flare-ups, including taking medicine daily, dieting and avoiding the sun.

"It's hard to gain attention for lupus because we don't look sick," said Rouseall, 40. "It's very difficult because you can't be in the sun, always tired and your body is constantly fighting a battle and you have to decide if you're willing to fight... you have to have a positive mindset, a warrior mindset."

Rouseall was diagnosed on Sept. 7, 2001, while she was working at Wayne State University. She says she could no longer work because she kept falling asleep and couldn't get out of bed some days. In the past, she was hospitalized for 30 days multiple times and had to do speech therapy after being comatose.

"I've bounced back. The fact that I can get up and drive and be here to support others is a great and shows I'm well," said Rouseall, a Detroit native who lives in Macomb. "I'm fortunate because I was diagnosed within six months, for some others, it take years."

Todd Russell Perkins lost his wife in April 2016 from lupus and on Saturday, he and their two children ran the 0.8 mile walk alongside other families.

"She was diagnosed in the beginning of 2010, 18 months after giving birth to our daughter, Kennedy... she was normally a healthy person, but noticed inflammation," said Perkins, from Detroit. "She lived six years after being diagnosed and died when she was 43."

Todd Russell Perkins and his two children join the walk for their mother, who died from lupus in 2016. (Photo: Sarah Rahal, The Detroit News)

Since her death, Perkins self-funds a scholarship through Lupus Detroit each spring. This year, it helped four students. He said they didn't know about the community while his wife was still alive, but wishes they had.

"Had she known these other fighters, it would have helped her battle," said Perkins. "This disease lays dormant in many people and we need to continue fighting for a cure." 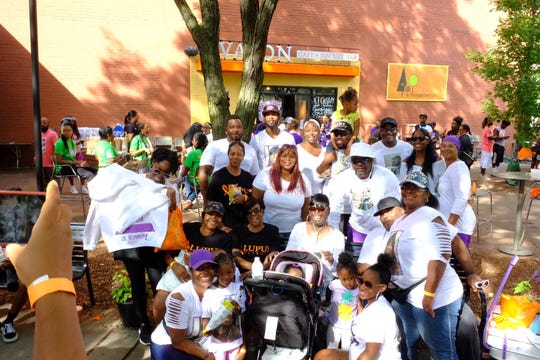