State Sen. Bert Johnson talks with reporters at the Michigan Capitol on Tuesday, March 28, 2017, about the FBI raid of his home and office.

Council member Janee Ayers said she’s into “no-nonsense governing” and believes residents see her “hard work and integrity.” Her team, she said, strives to be in the community and responsive.(Photo: David Coates, The Detroit News, file)Buy Photo

The letters were made public four days after Johnson was sentenced to 90 days in a county jail for stealing more than $23,000 from taxpayers by adding a ghost employee to his senate payroll. U.S. District Judge Matthew Leitman cited the letters, saying that without the personal appeals, he would have sentenced Johnson to as much as 12 months in federal prison.

Johnson received support from numerous Democratic Party heavyweights and a broad cross-section of the community: local and state politicians, a lobbyist and relatives who backed a corrupt politician with a rap sheet, a chronic list of bad debts and the worst attendance record in the state Legislature.

“In my conversations with Bert he realizes he made a mistake, but I hope you will exercise the greatest level of leniency in your sentencing of Mr. Johnson," Benson wrote. "Even though a sever (sic) lapse of judgment has occurred, Bert is not a threat to society and his community can best be served by him remaining free."

Ayers called Johnson one of her best friends.

“Bert has been a mentor and a strong pillar within the community that he represents and throughout the state," Ayers wrote.

In an interview Monday, Ayers said she didn’t think there was anything wrong with using city letterhead since the letter was coming from two vantage points; in her official capacity as a council person as well as on a personal level.

Bing, meanwhile, wrote that Johnson was a hard-working legislator who fought for constituents.

“I am aware that Bert has pleaded guilty; but would hope that his political background, his public service, as well as his overall commitment to his community be considered and, therefore, allow for leniency regarding his sentencing," Bing wrote.

“Please do not allow this recent indiscretion tarnish the good that Mr. Johnson has done as a state representative and senator," Highland Park Mayor Hubert Yopp wrote on city letterhead.

“It is times like now when we need powerful, respected leaders in our nation, I believe it would be a disservice to the public to lose a gladiator like Bertram Johnson," Jones wrote. "Godspeed!” 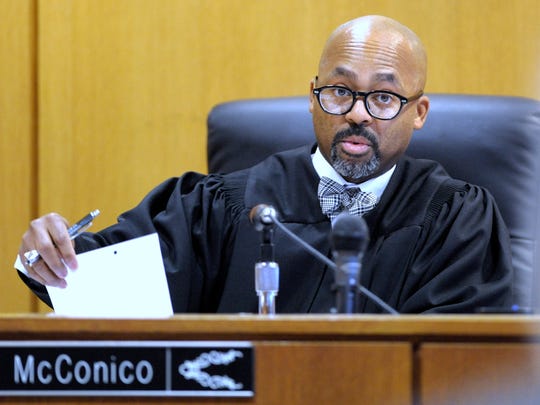 36th District Court Judge William McConico hears the case of Mark Bessner, who waived his preliminary hearing on second-degree murder charges, Thursday morning, February 1, 2018. Bessner, a former MSP trooper, allegedly Tazed Damon Grimes from his MSP scout car while the teen was riding his ATV on the east side of Detroit in late August of 2017. The teen lost control and died from head injuries after crashing into the back of a flat-bed truck. Bessner is currently out of jail after posting a $1 million bond a few days ago. (Photo: Todd McInturf, The Detroit News)

“I ask you to take into account that Bert is much more of an asset within the community than away from it,” McConico wrote.

“I believe that Bertram Johnson is truly remorseful for any wrongdoing,” Cavanaugh wrote.

Speaking directly to the camera at some point after his indictment but prior to his conviction, Johnson says he went to the Capitol “every day trying to make a difference, trying to make a change” and help constituents.