Residents of a Detroit senior apartment building complain of persistent crime, but police insist most problems stem from conflicts between residents

Tenant Katherine Tiller gets a hug from Detroit Police Commissioner Willie Burton as she recounts a violent incident she experienced in the elevator inside the Parkview Place apartments in Detroit. At right is Katherine Richardson, president of the tenant council for the building.(Photo: David Guralnick, The Detroit News)Buy Photo

But police officials insist most of the problems at the Parkview Place apartments stem from conflicts between residents. They say officers often are called to the building to negotiate disputes.

Tenants of the 199-unit facility at 1401 Chene, about a mile east of downtown, last year petitioned the facility's management to join Detroit's Project Green Light because they said there was rampant crime in and around the facility.

The problems continue 10 months after the building became a Green Light location, some residents say.

"It hasn't gotten better," said Katherine Richardson, 66, president of the Parkview Place Tenant Council, who has lived in the building for 10 years. "We've had four attacks in the building in the past month. We shouldn't have to be afraid walking in our own building."

While most Green Light locations are restaurants, bars and stores, a handful of residential facilities have joined the program, including Parkview, the Seven Mile Apartments on Detroit's east side, and the Carlton Lofts in Brush Park.

As part of Project Green Light, high-definition cameras and lighting are installed in and around stores, gas stations and other establishments. Video from the cameras is piped live into the Detroit Police Real Time Crime Center, where police and civilian employees monitor the feeds.

Parkview Place residents complain about strangers trying to get into the building — and, once inside, sleeping in the corridors and stairwells — along with harassment by other tenants.

There has been a significant increase in police runs to the building since management joined Project Green Light in November 2017, said Detroit Police Cmdr. Charles Mahone of the 7th Precinct. 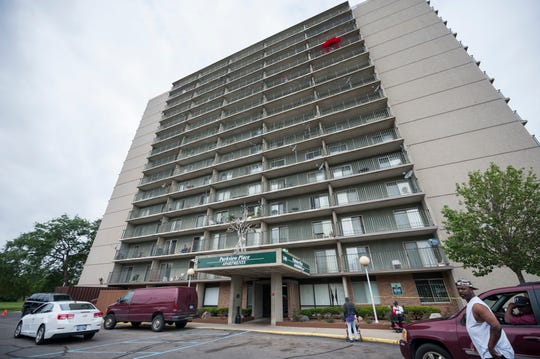 In the 302 days before the building joined Green Light, Mahone said there were nine calls for disturbances there. In 302 days since joining the program, there were 35 calls, he said.

Mahone attributed the spike in calls to the Green Light program.

"I don’t look at the increase in calls as a negative; I look at it as our citizens are reaching out to us more since the building joined Green Light, and we educated the residents about the program," he said. "They know they can call us if they have problems, so they do. But most of the calls are about disagreements between tenants and their visitors."

Project Green Light was launched in January 2016 and has 383 participating businesses, according to the city's website. The city announced in its Strategic Plan for Transportation it plans to install green lights at bus stops.

Richardson agreed many of the problems at Parkview Place involve fellow tenants and visitors. She wrote a July 11 letter, addressed to building management, which discusses "the violent attack of a young lady visiting (a building resident)."

In the letter, Richardson said a neighbor told her a woman had been assaulted by her son. "The lady had big (bruises) on her face, her face was swollen ... it looked like she had been punched in the jaw ... (it) was very big," she wrote.

Mahone said: "We have had a couple assault and batteries at the building. One was a mother and daughter who didn’t want to prosecute.

"But mostly we get called for things that aren't really crimes; it's just two people disagreeing," he said. "We'll tell them to go back to their apartments and try to stay away from each other."

"The building security and management are the best we've had in the 12 years I've lived here," Shirley said. "It's not perfect, but I think they're doing a good job."

Some crime up in area

On an online crime map, Detroit police data show that within a one-mile radius of the building, some reported crimes rose while some fell after Parkview Place management signed up for Project Green Light. For privacy reasons, the city obscures the exact addresses of incidents on its crime map.

"We've had our struggles with some issues at (the 7th Precinct), but this building is not part of that, thankfully, because it's a senior facility," Mahone said. "But even seniors have conflicts.

"We can’t control who calls 911, but we’re going to service that run, whether it’s a Green Light property or not," he said. "Especially when it involves seniors — we invest a lot of time in our seniors."

"This is a situation where better control needs to be put in place to handle the ingress of people in the building," he said.

Daran Carey, security director for Continental Management, said residents often allow others to "piggyback into the building when they come in."

"We've stopped a lot of people from getting in that way, but sometimes they get in because the residents let them in," Carey said.

One of the problems at Parkview Place, residents say, is security guards only patrol the building from 8 p.m. to 3 a.m.

"The freaks come out at night," said Richardson, who said she has complained about the building's problems at two meetings of the Detroit Board of Police Commissioners. "A lot of bad things happen after 3 in the morning."

Carey said: "We cut back on security because we have Green Light now. I think the program has been a success."

"They need 24-hour security," Burton said. "These are seniors we're talking about. I've gotten reports of assaults, vehicles being vandalized, people's doors being kicked in. I wouldn't want this to happen to my grandmother or anyone else's grandmother."

Katherine Tiller, 54, cried as she recounted a Labor Day incident in which she says she and her sister were harassed by a fellow tenant inside one of the building's elevators.

"He was coming out of his apartment, drinking," Tiller said. "He tried to stop my sister from getting into the elevator. We got on (the elevator), and he also gets on. He starts hollering crazy stuff, like he's going to kill us, and blow us up. He wouldn't let us off the elevator."

Tiller said she and her sister eventually escaped and informed building security, who told her to call police if the man approached her again.

Carey, a Detroit police officer for 29 years before retiring four years ago, said security staff investigated the incident, and determined the man to be at fault.

"He's in the process (of being evicted)," Carey said.

Shirley said while she feels Continental Management has kept problems to a minimum, issues persist.

"I feel safer outside than I do in the building, because there are people sleeping in the hallways," she said. "So I don't feel safe sometimes, but it's better than it was when I first moved in."

"Do I feel safe? No, sir. There have been a lot of bad situations here," she said. "I don't travel the halls without an escort, who is my caregiver. Even if I'm checking the mail or taking the trash out, I won't go alone.

"There's one gentleman who lurks in the halls, harassing people," Davis said. "I have complained (to building management) about being afraid. They said they're aware of some of the problems and are addressing them."

Richardson said she obtained a concealed pistol license and bought a .38-caliber handgun to protect herself.

"I don't want to have to use it, but I like having it just in case," she said. "People are doing crazy things."