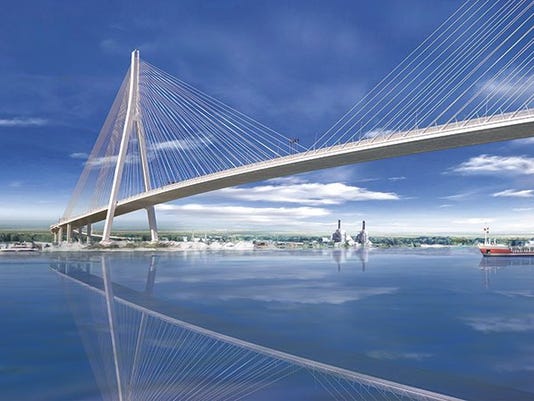 Canada is paying to build the bridge and expects to recoup its investment through tolls charged to cross the international bridge.(Photo: Windsor-Detroit Bridge Authority)

The official construction cost and targeted opening date for the Gordie Howe International Bridge, the second international crossing between Detroit and Windsor, will be released next week, a spokesman for the Windsor Detroit Bridge Authority said Friday.

"The announcement is imminent, by the end of the month," said Mark Butler, spokesman for the agency overseeing the long-anticipated bridge project. Butler declined to give a specific date for the announcement, but, it is in line with earlier statements by project officials that construction could start in October.

Earlier this month the construction group selected to build the bridge said it expected the project to cost an estimated $2.68 billion, which amounts to $3.46 billion in Canadian dollars. Construction could begin as soon as Sept. 29. and the target opening date was November 2024, according to the construction group.  That's two years later than previous estimates given by bridge supporters.

Canada is paying to build the bridge and expects to recoup its investment through tolls charged to cross the international bridge. The bridge will connect Detroit and Windsor by linking Interstates 75 and 96 in Michigan with the new extension of Highway 401 in Ontario. The bridge will be owned by the Canadian government and the state of Michigan.

The planned new bridge across the Detroit River will be the longest "cable-stayed" bridge in North America at 2,798 feet, officials have said. A cable-stayed bridge has one or more towers from which cables support the bridge deck. A distinctive feature of such bridges is the cables form a fan-like pattern.  Six lanes are planned, including a pedestrian and bicycle path.

Meanwhile, Ambassador Bridge owners have not given up opposition to the public bridge. The Ambassador Bridge, about two miles east of the Howe bridge, is owned by Manuel "Matty" Moroun. Moroun is a billionaire who, along with his son Matthew, control trucking and logistics firms in the United States and abroad.

Representatives for the Moroun family bought a commercial on Fox News, urging President Donald Trump to revoke the permit to build the publicly owned bridge based on Trump's "America First" policies.

The Ambassador Bridge owner plans a second span next to its existing bridge. The Morouns overcame a major hurdle by gaining approval from the Canadian federal government to build the second span.

The approval came with a list of conditions, including acquiring more Windsor properties and demolishing the existing Ambassador Bridge within five years of the replacement span opening.

Canada is the largest market for U.S. exports, taking in 15 percent of American goods and services worth $337 billion annually. The Detroit-Windsor border constitutes the busiest trade crossing along the U.S.-Canada border, with more than one-fourth of all goods exchanged between the countries using the route.