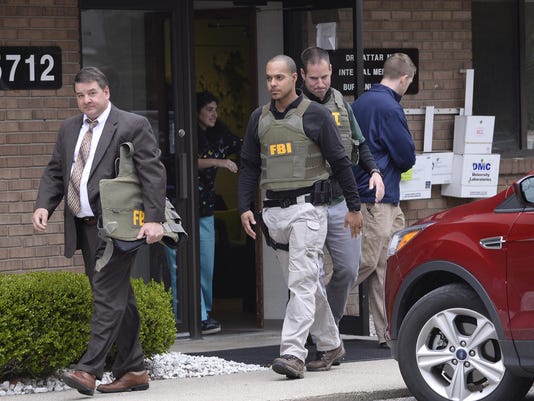 FBI agents leave the office of Dr. Fakhruddin Attar, Burhani Clinic in Aprial after completing a search for documents in the on going investigation of Jumana Nagarwala of Northville who is charged with female genital mutilation of two 7 year old girls. Livonia(Photo: Clarence Tabb Jr. / Detroit News)

Detroit — Grooms pay more money for brides who have undergone female genital mutilation, a religious practice central to a rare criminal case involving a small Muslim sect from India, according to a victims' rights group.

The claim was included in a brief filed in federal court Monday by the nonprofit New York-based AHA Foundation, which is trying to bolster a criminal case pending in federal court against eight people accused of participating in a conspiracy to cut prepubescent girls.

The brief is intended to support the government's contention that female genital mutilation is inextricably linked to commerce — making it a federal crime — because doctors who perform the illegal procedure are often paid and the procedure increases the "bride price" of mutilated girls.

"FGM is also linked to commerce in one further insidious way: as a means of increasing the money received by victims’ families upon marriage," foundation lawyer Mark Franke wrote. "This is not an incidental feature. In many communities, custom dictates that the parents of the bride receive a “bride price,” i.e., a payment in exchange for their daughters, upon marriage."

"I believe the court will find the arguments have no merit and do not apply to our case in any way," said Shannon Smith, an attorney for one of the defendants, Northville Dr. Jumana Nagarwala. "I will give them credit for creativity; however, some of the claims are so ridiculous it’s hard to believe they were presented to a court."

So far, eight people have been charged with participating in a conspiracy that prosecutors say lasted 12 years and led to mutilating the genitalia of girls as part of a religious procedure practiced by some members of the Dawoodi Bohra.

Locally, most members of the sect belong to the Anjuman-e-Najmi mosque in Farmington Hills.

His wife, Farida Attar, and Tahera Shafiq of Farmington Hills helped Nagarwala during the procedures, according to the federal indictment. Two mothers from Minnesota — Haseena Halfal and Zainab Hariyanawala —and two from Oakland County — Farida Arif and Fatema Dahodwala — are all  parents of minor girls who arranged for the procedure to be performed by Nagarwala, according to the government.

A new indictment issued earlier this month alleges nine girls from three states underwent the illegal procedure at the Livonia medical clinic since 2015. One girl was drugged, according to the indictment.

Defense lawyers say the procedure performed on the girls was benign and not female genital mutilation. They accuse the government of overreaching.

There are four major types of female genital mutilation, including a partial or total removal of the clitoris.

Prosecutors have alleged that two girls’ clitorises were completely removed but the evidence is lacking for at least one girl, Smith said.

"The primary purpose of FGM is to control a woman’s sexuality by removing her ability to enjoy sexual intercourse," Franke wrote. "... that lack of enjoyment is meant to increase the victim’s chastity and virtue — in other words, to keep her faithful to her husband. FGM thus robs victims of their bodily integrity, autonomy and self-determination. In other words, it turns them into slaves."

The case is being closely followed in India, where the Dawoodi Bohra are based, and by international human rights groups opposed to female genital mutilation, a federal crime since 1996.

One defense argument is that Congress lacked authority to enact the female genital mutilation law under the Commerce Clause of the Constitution because the procedure has nothing to do with interstate commerce.

Prosecutors argue Congress can regulate female genital mutilation because it is a service.

"Like child pornography and marijuana, an interstate market exists for FGM that Congress has sought to regulate and eradicate," prosecutors wrote in a court filing. "Congress made clear its intent for the United States to contribute to international efforts to stop the harmful practice of FGM generally and ensure it does not occur within the United States."