Detroit — A campaign staffer for City Councilman Gabe Leland was charged in federal court Wednesday with joining a conspiracy to bribe an unnamed Detroit politician with thousands of dollars in cash and valuable items.

Elisa Grubbs, 53, is expected to plead guilty amid a federal grand jury investigation targeting Leland, who was first identified as being under investigation last year after The News obtained sealed FBI wiretap documents.

Leland is not named in the criminal filing but a Detroit businessman identified the councilman as the recipient of a $7,500 bribe delivered to a woman in an envelope last year.

The charge marks the next phase of a crackdown on public corruption that emerged two years ago in Macomb County before spreading to Detroit. The crackdown has yielded charges against more than 20 people, including politicians, a deputy police chief and businessmen, including trash mogul Chuck Rizzo and Detroit towing titan Gasper Fiore.

Fiore, who was sentenced to 21 months in prison in August, was cooperating with corruption investigators, who tapped his phone while targeting Leland, former Macomb County Public Works Commissioner Anthony Marrocco, and others. A document describing the extent of Fiore's cooperation is sealed in federal court.

“It’s not surprising this investigation has gotten as large as it is,” said Peter Henning, a Wayne State University law professor and former federal prosecutor. “What typically happens is the government starts out with evidence of one bribe and that unlocks the door to a lot more.”

Leland did not respond to a message seeking comment Wednesday.

Grubbs was charged 11 months after she leveled claims of inappropriate sexual behavior against then-U.S. Rep. John Conyers, a claim that contributed to the political titan's downfall after a 53-year career in public service. Grubbs, who said she worked for Conyers from 2001-13, claimed she was touched by him inappropriately and that he appeared naked in front of her. 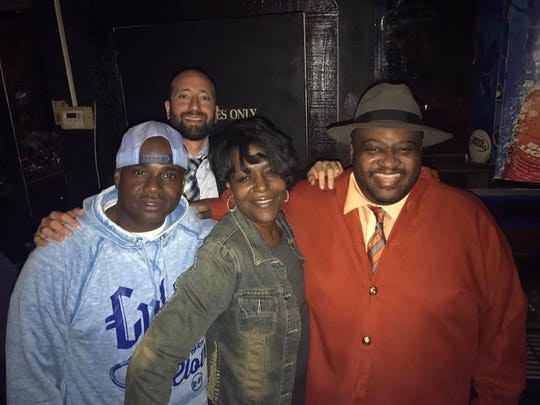 Elisa Grubbs (front row) attended an event at Mr. Mapp's Lounge in Detroit with City Councilman Gabe Leland (back row) in July 2017, one month before prosecutors say she delivered a bribe. (Photo: Facebook)

Grubbs' court-appointed lawyer did not respond to a message seeking comment Wednesday.

The city official who received bribes from Grubbs is not identified in court records. Instead, investigators refer to the politician as "City Official X."

The conspiracy outlined by the government involved "City Official X" receiving bribes in exchange for the city official using their official position to help an unnamed business owner.

In May 2017, "City Official X" met with an unnamed business owner and discussed helping the businessman in exchange for thousands of dollars.

On Aug. 4, 2017, Grubbs met the business owner and accepted thousands of dollars on behalf of "City Official X," according to federal court records. That same day, Grubbs gave the money to the city official.

The allegation and dates in the criminal case against Grubbs match a claim involving bribes and Leland in a civil lawsuit in federal court.

Businessman Robert Carmack said he delivered $7,500 cash in an envelope to a Leland campaign worker in late summer 2017, according to the lawsuit filed against the councilman earlier this year.

The lawsuit’s allegations date to a few weeks before the August 2017 primary election in Detroit. Leland was running for re-election and Carmack was trying to resolve a dispute involving property he owned at 8124 Michigan Ave. Carmack alleges the city illegally demolished his commercial building using federal funds and was trying to sell the property.

“Leland demanded and requested ... $15,000 for his reelection campaign,” Carmack’s lawyer Andrew Paterson wrote in the lawsuit.

Carmack says he ignored the request.

Leland, who chaired a City Council committee responsible for community development, promised not to sell the property in exchange for $15,000, Carmack alleges.

Carmack feared he was being extorted so he approached the FBI, according to the lawsuit. The FBI is investigating widespread corruption involving politicians, police officers in Detroit, Macomb County and across southeast Michigan.

The day after Leland asked for $15,000, Leland called the businessman and said he would be sending someone to pick up the cash, according to the lawsuit.

That same day, a woman who Carmack believed to be a Leland campaign worker met him on a side street near a bank on East Jefferson Avenue in Detroit, the lawsuit alleges.

The next day, Carmack said he met with Leland.

“Leland responded that he had in fact received the money from the campaign worker,” Paterson wrote.

Carmack was free to do whatever he wanted with the commercial property, Leland said, according to the lawsuit.

On Wednesday, Paterson identified Grubbs as the campaign staffer who received and delivered the bribe. Carmack believes he is the unidentified businessman referenced in the criminal case, Paterson said.

The lawyer said the criminal case proves Carmack was telling the truth about his dealings with Leland and other elected officials.

"My client has been unlawfully retaliated against by Councilman Leland and other elected city officials for exposing this corrupt behavior," Paterson said in a statement to The News. "Hopefully, today's (criminal charge) will send a clear message to other elected city officials who conspired with Councilman Leland to retaliate against my client that the FBI and the U.S. Attorney's office are seriously investigating their unlawful conduct."

In one photograph, Grubbs is posing with Leland and others inside Mr. Mapp's Lounge in Detroit on July 3, 2017, one month before prosecutors say she allegedly picked up and delivered the bribe.

In other photos, she’s at Leland's side at a June 3, 2017, ribbon cutting at Rippling Hope, a ministry that helps with mission trips.

In one of the photos, posted by Isaac Robinson, an attorney and candidate for Michigan’s House District 4, Robinson notes “Leland and the District 7 team” were out supporting the cause. Grubbs is tagged in the Facebook post.

"The idea that she would bribe somebody or commit a crime of this nature is ridiculous," Robinson wrote in an email to The News. "Elisa has a lawyer and I trust Elisa is making decisions that are in her best interest to get through this situation."