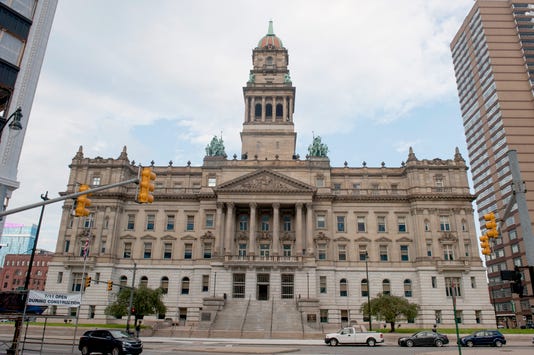 The ownership of group for the iconic Old Wayne County Building in Detroit announced Monday that it has completed a $7 million project to restore the interior and exterior of the historic building.(Photo: John T. Greilick, The Detroit News)Buy Photo

Detroit  — Owners of the iconic Old Wayne County Building in Detroit announced Monday that a $7 million project to restore the interior and exterior is finished.

“Detroit is filled with so much history, and restoring this important and unique building to its previous grandeur has been an exciting and rewarding journey,” said Moshe Oppenheim, a representative for the ownership group, in a statement Monday.

“As Detroit continues its resurgence and becomes an attractive location for business, technology and entrepreneurship, this illustrious building will undoubtedly play a prominent role in the continued development of Detroit.”

Above the main entrance on Randolph is a frieze showing Gen. Anthony Wayne, after whom the county is named, with soldiers, settlers and native Americans. (Photo: John T. Greilick, The Detroit News)

In May 2017, a spokesman for the owners, a group of New York investors, said that they were seeking a single tenant for the building. It was unclear Monday if a tenant had been identified.

Over the years, the granite and limestone of the ornate Beaux-Arts building had deteriorated and become stained. A pair of copper-plated sculptures of two goddesses astride four-horse chariots was restored, as well as the roof, entryway, façade and mechanical systems. 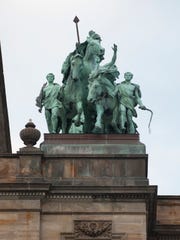 At the top of the building are a pair of copper-plated sculptures -- two goddesses astride four-horse chariots. (Photo: John T. Greilick, The Detroit News)

Detroit-based Quinn Evans Architects and the Lansing-based Christman Co. headed up the project.

“People love to see historic buildings like this restored,” said Eric Kehoe, board president for Preservation Detroit. “It’s an energizing project. Their work shows that preservation is not only economically feasible, but the best option for development in the city.”

The county sold the building in 2014 for $13.4 million. The sale included a 120-vehicle, county-owned parking lot adjacent to the building.

Wayne County government left the building in 2009 when it moved to the Guardian Building on Griswold.

The Old Wayne County Building has been on the National Register of Historic Places since 1975.