Politicians, others turn out for striking hotel workers

Politicians, others turn out for striking hotel workers 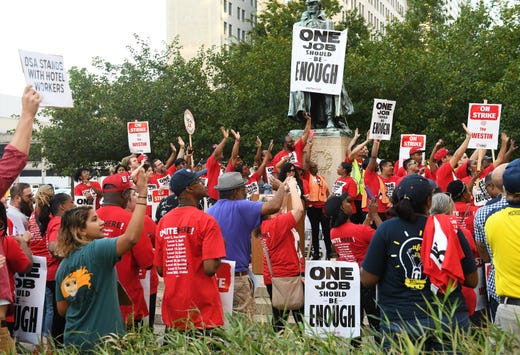 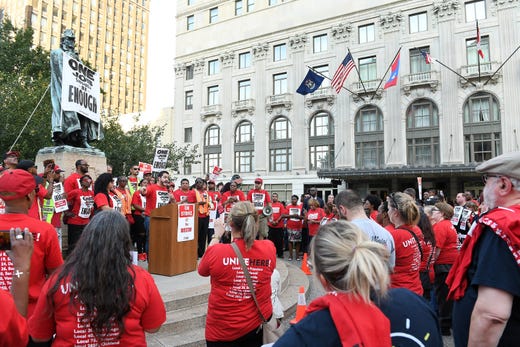 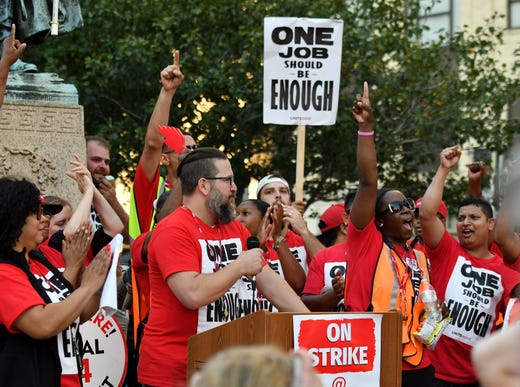 Yolanda Murray of Harper Woods, right, pointing up, and others cheer while Dave Frassetto of Royal Oak, a lead bartender at the Westin Book Cadillac, left, speaks at a rally for and by workers from Unite Here Local 24. Robin Buckson, The Detroit News
Fullscreen 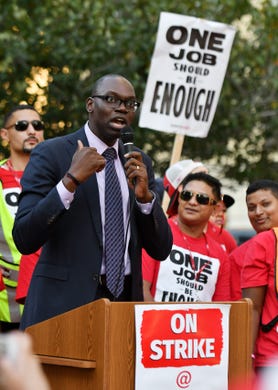 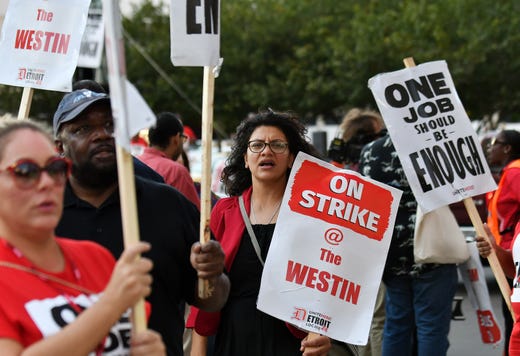 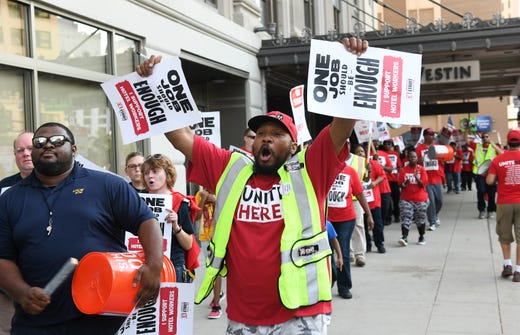 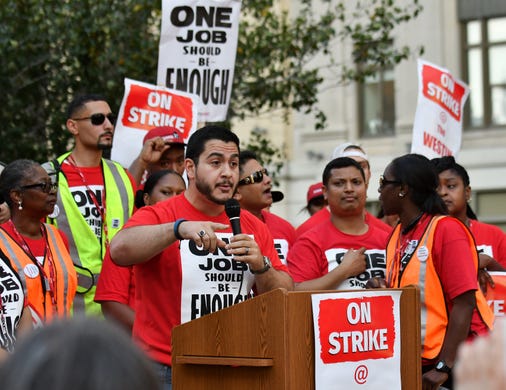 Democratic activist Abdul El-Sayed speaks at a rally for workers from Unite Here Local 24 on strike at the Westin Book Cadillac in Detroit on Oct 9, 2018. Robin Buckson, The Detroit News
Fullscreen 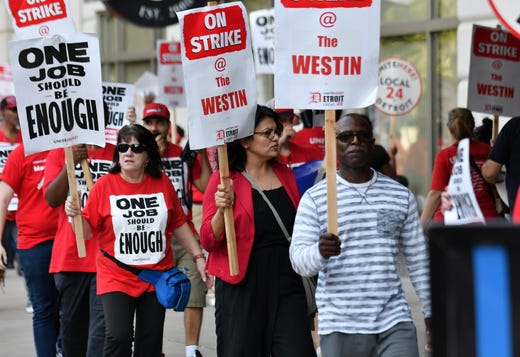 Democratic Congressional candidate Rashida Tlaib, center, marches on the packed picket line with workers before a rally. Workers from Unite Here Local 24 on strike at the Westin Book Cadillac in Detroit on Oct 9, 2018. Robin Buckson, The Detroit News
Fullscreen 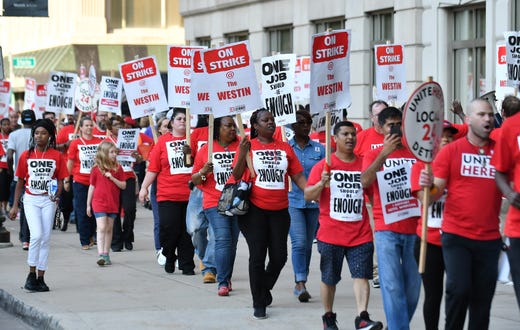 The picket line is packed and workers march before a rally. Robin Buckson, The Detroit News
Fullscreen 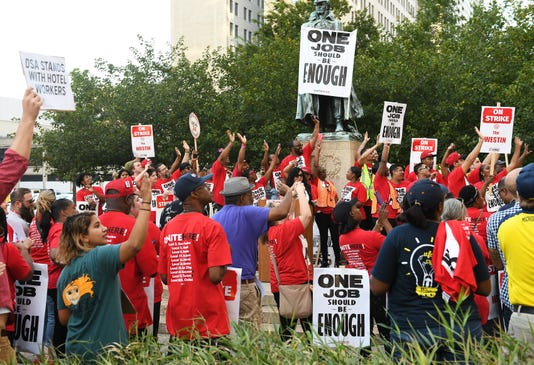 David Frassetto had a simple reason for donning a red T-shirt and joining scores of fellow Westin Book Cadillac workers picketing outside the downtown Detroit destination this week.

“I’ve been here for almost nine years. In that nine years, I received a 60-cent pay raise,” the bartender told demonstrators Tuesday. “That was six years ago. Six years ago!”

Unite Here Local 24, which represents about 160 hotel workers including bartenders, servers, cashiers, bellmen, front desk workers and housekeepers, have been picketing around the clock since Sunday as members seek higher wages amid contract talks.

Members authorized a strike last month. The strike is part of a larger national effort by thousands of Marriott employees across the country, including  Hawaii.

Union officials argue the workers cannot survive on their pay at the Detroit property, claiming staff at the nearby Renaissance Center Marriott earn an average of $2 more per hour.

Further negotiations are planned this week, but staffers plan to remain off the job until Marriott meets their demands, Local 24 president Nia Winston said. “Unfortunately, they have not done right by its workers.”

Reached for comment Tuesday, Marriott International representatives sent a statement: “We are disappointed that Unite Here has chosen to resort to a strike at this time. During the strike our hotels are open, and we stand ready to provide excellent service to our guests. While we respect our associates’ rights to participate in this work stoppage, we also will welcome any associate who chooses to continue to work.”

Chanting, carrying signs, banging buckets and blowing whistles outside the Westin on Tuesday, Local 24 members marched with area union supporters as well as public figures such as Rashida Tlaib, the presumptive replacement for former Rep. John Conyers in the U.S. House of Representatives.

During a solidarity rally across the street, activists and others reminded the throng why they should stay the course.

“It’s a hard thing to do, but it is not as hard as coming in to work every single day, day in, day out, walking in those doors and feeling disrespected,” said Gwen Mills, a leader with Unite Here’s national team.

Rashid Buford, a Westin cook, pointed at the T-shirt he wears at a second job.

“While my kids are at home, I have to put on this shirt because this job that I’ve been at since they opened does not pay me enough,” he said.

David Black, another longtime worker and banquet captain and father of three, also works a second job to make ends meet. “One job should be enough,” he said.

Detroit City Councilwoman Janee Ayers, a union member, noted businesses across the city thrive when considering its employees. “Great establishments take care of the great people that make their establishments great,” she said.

“We see much progress in some parts of the city, yet we know that so many are struggling,” she said. “We still have some of the highest poverty in the country. That is wrong. … This is supposed to be the land of opportunity.”

“Today we’re telling them that in America, where we believe in liberty and justice for all, labor will stand up!” he said.

That’s why Yolanda Murray, a lead steward at the Westin, pumped her fist and stood for hours with other protesters. “We’re here to make a difference,” she said.